I’m humbled. I’m from urban Baltimore. I would never have thought I would be in this place,” Evans said. “I know God could have used someone else. The fact that He’s allowed me the opportunity to do this with my weaknesses and with my flaws, it shows me grace, it shows me mercy, it shows me gratitude.”

Due to the historic nature of the study Bible and commentary, the Museum of the Bible in Washington, D.C., has informed Evans they will be placing the publications on display in the future. 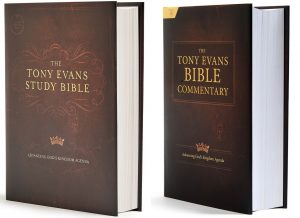 Evans said he wanted to create “The Tony Evans Study Bible” and “The Tony Evans Bible Commentary” to “show the kingdom thread throughout all the books of the Bible and to help readers see how eternity and history are connected by this unifying theme of the glory of God through the advancement of His Kingdom.”

He is the senior pastor of Oak Cliff Bible Fellowship in Dallas and the founder of The Urban Alternative, a media ministry whose radio broadcasts are heard by millions each week on more than 1,400 radio outlets across 130 countries.

Evans has been breaking racial barriers for much of his ministry. In 1982, he became the first African American to graduate with a doctoral degree from Dallas Theological Seminary.

“To be the first of anything is an honor,” Evans said. “But you want to handle honors in the right way—to carry yourself in a way that recognizes you are a tool that God didn’t have to use. You are privileged because He used you. That ought to make you a better servant, not a bigger star.”

Evans also noted there being a “downside” to being the first African American to reach certain milestones because it means “it took a long time before African Americans were allowed in our major institutions of biblical learning due to segregation.”

He said that while he is excited, it’s also “disappointing that I had to be the first because it took that long for Christians to catch up to righteousness when it came to justice and the issue of race.”

Evans said the root of divisions, like those surrounding race, come from people not having and exercising a worldview driven by God’s Kingdom. He recalled being rejected by a church because of his race. “That’s an illustration of how I was hearing something preached and wasn’t seeing it worked out in society,” he said.

Helping people grasp a Kingdom-oriented mindset has been part of Evans’ ministry and is a reason he developed his study Bible and commentary. If an individual develops a “comprehensive Kingdom approach” to life, Evans said, they can see how the Bible addresses everything they face. “I’ve not found an issue yet that a Kingdom approach will not address in a simple form.”

“The Tony Evans Study Bible represents five decades of Dr. Evans’ faithful Bible study and teaching,” said Trevin Wax, director for Bibles and reference at LifeWay Christian Resources. “Tony Evans is well known and respected for his practical teaching and application of Scripture. My prayer is that Dr. Evans’ study Bible will equip and empower readers of God’s Word, so they better understand what it means to live according to God’s Kingdom agenda.”

In addition to the study Bible and commentary, Evans has authored more than 100 books, Bible studies and devotionals, including “The Kingdom Agenda,” “Pathways,” “Detours” and “No More Excuses.”

The Tony Evans Study Bible from the Christian Standard Bible includes extensive notes and resources crafted and curated by Evans from his sermons, teachings and writings; 40 articles; 50 “Lessons of Kingdom Living;” and additional online resources that feature 170 videos from Evans.