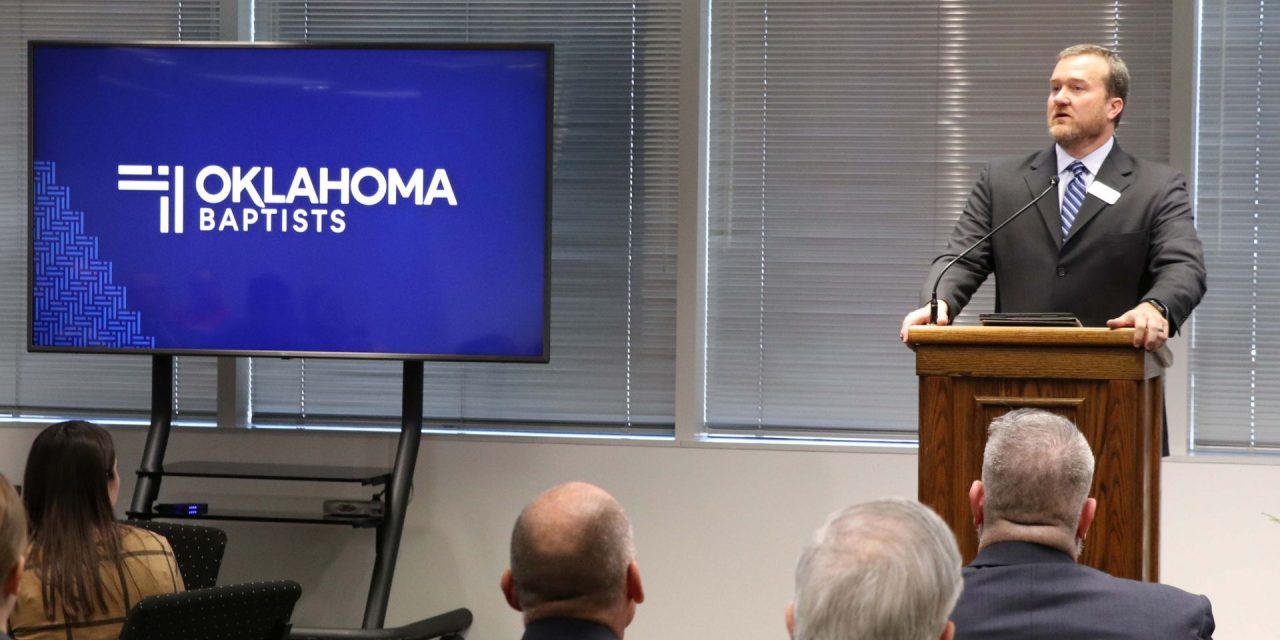 Todd Fisher was approved to serve as Oklahoma Baptists’ executive director-treasurer with a unanimous vote by state convention board members during a special-called business meeting Oct. 5 in Oklahoma City.

Fisher will be presented for formal approval by Oklahoma Baptist messengers during the upcoming annual meeting on Monday, Nov. 15 at Oklahoma City, Southern Hills. He would officially assume the role as executive director-treasurer in January of 2022.

The board also approved a motion that Oklahoma Baptists Senior Associate Director Joe Ligon, who has been serving as interim executive director-treasurer, would continue in that role until December 31. Fisher will assume his responsibilities on Jan. 1 of next year.

Fisher has 30 years of pastoral experience and has served in multiple leadership roles in Southern Baptist Convention (SBC) life.

Fisher has served on various boards across SBC life, including as chair of the Southern Seminary board. Fisher is currently serving a one-year term as Oklahoma Baptists’ president and is scheduled to preach at the 2021 Annual Meeting.

He is married to Jamy, and they have three children: Zachary, Carly and Anna.

Members of the Oklahoma Baptists Executive Search Committee each spoke enthusiastically about Fisher during the meeting and expressed how they believe God guided the decision process.

Committee chairman Michael Staton, pastor of Mustang, First, explained the search process and how the Lord led them to nominate Fisher.

“I want to express how truly thankful our committee is for your support and prayers,” Staton said. “As you can imagine, this is a daunting responsibility and one we have approached with dependence upon the Holy Spirit to direct our steps. The Lord has used your encouragement and intersession on our behalf to strengthen us to accomplish His work. We are thankful for each of you.

“Second, I want to say how much I appreciate the committee I was honored to serve with in this process. Each committee member was an active participant who approached this responsibility with prayer and humility. These are fine, godly men who have proven to be worthy of the trust you placed in them. I will forever be impacted by the privilege of serving together with them.

“I also want to state my deep gratitude for our Oklahoma Baptists staff. These talented men and women have carried on the work during this interim time with skill and dedication. Under the leadership of our interim executive-director, Joe Ligon, the work of Oklahoma Baptists has continued to flourish. I know that does not happen by accident; it is the result of the kindness of God through the excellent leadership of Dr. Ligon and the rest of the staff.

“Finally, I want to share how excited I am for the future of Oklahoma Baptists. Make no mistake, there were a number of gifted men who could have been selected to this role and would have served us well. In the end, the Lord clearly led us to Dr. Fisher, and I believe under his leadership, the work of the Kingdom will continue to grow in our state. He is a proven leader, theologian, pastor to pastors and a committed follower of Christ. I believe great days are ahead.”

Each of the members of the search committee shared their part in the process and how the Lord led them to select Fisher.

Search committee member Rusty McMullen, pastor of McAlester, First, said, “It was an honor to serve Oklahoma Baptists on this search committee. I am confident our great God has brought us His man for this time. Please joining me in praying for him and the rest of our state convention leadership. Great days are ahead for Oklahoma Baptists.”

Fisher ‘thankful to the Lord,’ desires to lead with humility and listening ear

During the Oct. 5 meeting, Fisher addressed board members, thanking them for their support and asking for prayer.

“I was not seeking this job,” he said. “I am very happy where I am serving. But it became apparent to Jamy and me, through the process, that God was calling me to serve in this capacity.

“I want our board, and I want Oklahoma Baptists to know, that I am excited about this new challenge,” Fisher continued. “I want to make the following commitments. I will commit to lead our state convention with humility. I will work to build consensus. I want to listen. I want to be a servant-leader for our convention. I want to be a humble and accessible encourager to churches of every size and in every part of Oklahoma. I commit to lead with faithfulness to the Lord Jesus and to the Faith.”

In additional remarks, Fisher underscored his support to the Baptist Faith and Message, the Cooperative Program and to the Great Commission. Fisher then asked board members and Oklahoma Baptists for prayer. At the conclusion of the meeting, board members surrounded Todd and Jamy, laying hands on them in prayer.

For additional coverage of this story, look to the print edition of the Baptist Messenger.