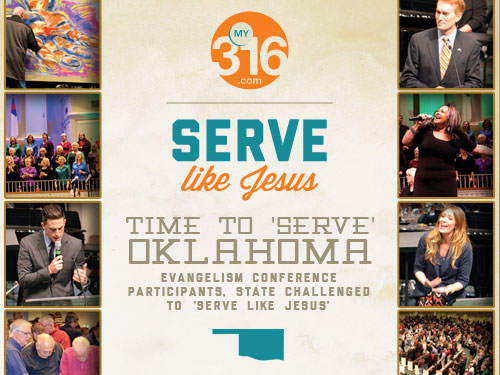 More than 1,600 Oklahoma Baptists and others took part in the 2013 State Evangelism Conference. The theme for the annual Baptist General Convention of Oklahoma (BGCO) event, which was held at Oklahoma City, Southern Hills, Jan. 28-29, was “Serve Like Jesus.”

In addition to sermons by recognizable local and national pastors, such as Tony Evans, author, radio show host and senior pastor of Oak Cliff Bible Fellowship in Dallas, participants were challenged to take part in a new BGCO Initiative called “Serve Oklahoma.”

“After this power-packed conference, participants are now ready to continue serving and leading through both actions and words,” said Tim Gentry, BGCO evangelism specialist.

“SERVE Oklahoma (SOK) is an eight-week strategy targeted at involving the entire church in personal growth, missions and evangelism; primarily through the Sunday School or small group ministry,” said Gentry. “We are calling on our people to:

Put the following on your church’s 2013 calendar:

• “Being the church” instead of “doing church”

• Mobilizing believers to take Jesus outside the walls of the building

• Sharing your church’s story with the Baptist Messenger

Training and breakout sessions were offered on various topics, including harnessing social media and evangelism to children, as well as ethnic outreach.

Kicking off the conference Monday afternoon, Miller asked, “How many of you are glad to be here?” It was a question he asked multiple times during his message.

The pastor of Muskogee, Southeast  spoke on Rom. 12:11, “Do not lack diligence; be fervent in spirit; serve the Lord.”

Miller shared stories of his early years of preaching, which started when he was 15.

At 18, he had an experience  with a man he encountered while visiting door-to-door. He invited the man to visit his church, but the man resisted.

However he wanted Miller to answer a question, and if he did, the man said he would come hear Miller preach.

“Well, I was 18 years old,” said Miller. “I had been preaching for three years. I knew everything there was to know in life. I said, ‘Sir, what’s your question?’ He said, ‘I want to know where did Cain get his wife from.’”

Miller said he was stumped by the question, but he told the man he would go home and ask his daddy, “the smartest man I know.”

A week later, Miller went back to visit the man.

“He opened the door and said, ‘Do you have an answer for me?’” Miller said. “Yes sir, I’ve got an answer for you. My dad told me to come back and tell you that the less you know about another man’s wife the better off you will be.”

Bender, a former Oklahoma pastor who now serves as pastor of Colorado Springs, First, bemoaned the fact that most Christians have a focus that is blurry, forgetting that lost “people are our most important work.”

“We have gotten over it,” he said Monday afternoon, referring to what Jesus has done for us. “It’s been too long.”

“As Paul wrote to the Galatians, ‘Where is that sense of blessing you once knew?’” he questioned. “How can we be a source of blessing to others if we, ourselves, are not blessed?”

Quoting Peter Lord, Bender said, “How you live is what you really believe; all the rest is just religious talk.”

“Why is it the longer we walk with the Lord, the less of an evangelist we become?”

Bender reminded those present that Jesus “seeks to come to us when we are fearful” . . . “seeks to support us when we fail” and . . . “comes to us for service.”

Also Monday afternoon, Kevin Clarkson, pastor of Moore, First, preached about the link between prayer and service. “Pastors, let’s get on our faces before God for our city, state, nation and world. Let’s ask, like the disciples did, that God would enlarge our faith.”

Illustrating with the example of the woman at the well who met Jesus, Clarkson talked about a prison ministry through which his church members are seeing fruit.

“Jesus came to seek and save what is lost,” he added. “Let it be said of us that we are a people that took God at His Word, His promises.”

Monday evening, Stroope shared he has been pastor of Rockwall, Texas, Lake Pointe for 33 years. He said he used to think the Great Commission says we are to reach people and to teach people.

“So that’s what we did. We would reach people, and we taught people,” he said. “Until all of a sudden I was reading the Scripture one day, and I found out I had gotten it wrong. The Bible does not say we are to reach and to teach people. It says we are to reach people and teach them to obey.”

Stroope said that as the church takes heed to this and grows in the mind of Christ, the church will have to change the way it serves. He also emphasized that how people are to serve involves how they are uniquely gifted, not by replicating what others do.

“I think what happens, when we begin to think about serving like Christ, we think we have to serve like somebody else serves,” he said. “And the truth is, God has been involved in your life and He will redeem every circumstance that you’ve been through. When we are getting ready to serve like Jesus served, our service will not look like anybody else’s. It will be like Jesus in a sense that it is service, but it will be our own unique service.

Monday evening, Collins delivered a sermon out of Acts 3.

“In the New Testament, we see people asking the Apostles ‘by what power are you doing these (works)?’” said Collins. “I wonder why Christians today are not asked that? Could it be that because nothing is really happening (in our churches) to cause them to ask?”

Collins, in his fiery delivery style, admonished listeners, “We need to stop trying to make everybody feel good and start giving them what they need.

“Oklahoma will never be the same if we make ourselves available to God to do what He wants,” said Collins. “In Acts 3, we see that Peter was ‘filled with the Holy Ghost.’ We need more of the Holy Ghost. Or more accurately, the Holy Ghost needs more of us.”

“There’s power in Jesus to make people whole,” he added. Jesus isn’t the best way to Heaven, He is the only way to Heaven.”

Collins pledged to keep the Gospel at the forefront of his ministry.

Collins, preaching Tuesday afternoon out of Jesus’ words, “As you go,” in Matthew, chapter 10, began by saying, “This conference is about serving like Jesus, and I vote ‘yes.’”

He said the Lord calls us to consistency in our witness.

“When Jesus called on us to witness, He didn’t say to plan ahead or put together an evaluation team three months ahead or form a visitation team,” Collins said. “He simply said, ‘As you go.’”

Pointing out that Jesus was “about His Father’s business” at age 12,” Collins asked, “How much older do we have to get to do it like Jesus does?

“There’s a lost world out there who wants to know we’re real! It’s a lifestyle, Oklahoma Baptists!”

He said believers need to be consistent and compelling. But, how?

And as we go, Collins said, there is a reward.

“Aren’t you glad that as you go, God will give you some mountaintop experiences?” he asked.

Newton spoke on the complacency, complaining and need for cleansing of the Israelites who failed in their efforts after Cyrus the Great allowed 50,000 of them to go back and re-build the tabernacle as outlined in the Old Testament book of Haggai.

“Haggai was a minor prophet with a major message,” Newton said. “He confronted the Israelites about their complacency. They had taken the blessings of God designed for the Temple and used them to build their own houses.

“A question we need to ask today is am I building a kingdom for myself?”

Pointing at an apathetic society of believers, Newton said, “Sometimes, indifference is more grossly immoral than idolatry. We, as Americans, are resource rich, but commitment poor.”

He then took aim at those who complain about worship styles.

“I ask forgiveness for my generation because we have made it (worship) about style over substance,” he said, “and as a result, our churches are fractured.”

Finally he called for cleansing.

“Your past does not define you, your future is written for you; that is the Gospel,” he proclaimed, urging a protection of holiness.

Spradlin emphasized “Servant Leadership,” as he spoke on Luke 22, where Jesus shared with his disciples, “For who is greater, the one at the table or the one serving? Isn’t it the one at the table? But I am among you as the One who serves.”
Spradlin recounted the many times the disciples argued about their place in the Kingdom, and who should be considered the greatest. Every time, though, Jesus instructed them that the greatest would be the one who serves.

Wrapping up the conference Tuesday evening, keynote speaker Evans, said, “If you want to save Oklahoma, you must serve Oklahoma in a way when the salt leaves the shaker.” The popular speaker and pastor of Dallas, Texas, Oak Cliff Bible Fellowship used Matthew 5 as his sermon’s text to challenge believers to be “salt,” preserving a world with much chaos and discord.

“There is racial conflict. There is class conflict,” he said. “Society is sick. God’s immune system for society and the world is the Church. When cultural ‘colds’ become societal ‘pneumonia,’ it is because the church has not done its part.”

Evans said Christians have failed to understand the unique role God gave us in history. “We are the salt of the Earth, not of the salt shaker,” he said. “The point of salt is to leave the shaker and come in contact with the substance. This is what your ‘Serve Oklahoma’ emphasis is all about.”

Evans also gave examples of how Christians are “light,” reflecting Jesus publicly, saying “This is not a day for ‘secret agent’ Christians. You must be visible, not only with your words but also good works. Good works are not just good things. A good work is a biblically-authorized deed to give God glory.

“It is time for God to be glorified in your works,” he said. “This conference is like a ballgame—65,000 people do not come to watch 11 men in a huddle. They come to see what difference the huddle makes.”

For more information on Serve Oklahoma or the SEC, visit bgco.org/serveok.