Posted on February 7, 2013
By Brittney Brown

IRVING, Texas (BP) — Facing pressure from its supporters and members, the Boy Scouts executive board announced Wednesday it is delaying a decision on lifting its prohibition of gay Scout leaders and members until May, when it will put the matter before its 1,400 voting members.

Meeting in Irving, Texas, the board was considering a proposal that would have replaced the national ban with a “local option” for local councils to determine the policy, potentially leaving a patchwork of different policies within the same city. Outside groups on both sides had criticized the proposal.

In a statement, the Scouts announced that “after careful consideration and extensive dialogue within the Scouting family, along with comments from those outside the organization,” the board concluded that “due to the complexity of this issue, the organization needs time for a more deliberate review of its membership policy.”

The statement further said that the board directed its committees to engage Scout members and “listen to their perspectives and concerns.” The board will “work on a resolution on membership standards” and present it to the 1,400 voting members at the national annual meeting in May. 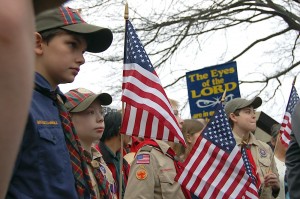 Boy Scouts from the Dallas area gathered near the podium at a rally on Wednesday to show their support for the traditional policy of the Scouts, which encourages them to be morally straight. The Scouts do not allow homosexuals to serve as members or leaders Photo by Jerry Pierce.

“I’m very excited to hear that the Boy Scouts have delayed their decision and that they’re going to put it before the annual meeting,” Luter told Baptist Press. “I also want to thank all the believers across the country who have been praying about this situation. I just can’t help but think that the ‘prayers of the righteous availeth much’ in this situation. I don’t think it’s a coincidence that the decision was delayed.”

Frank Page, president of the SBC Executive Committee, also applauded the move. He had appeared on CNN Wednesday morning — prior to the Scouts’ announcement — to defend the current Boy Scouts’ policy.

“I am delighted the Scouts have delayed their decision,” Page told BP. “While I wish they had put this to rest by voting to maintain their current policy, at least this gives all segments of the Scouting family an opportunity to express their views to the Scouting leadership. I urge all Bible-believing Christians to continue to pray that the Boy Scouts will hold fast to the biblical principles of morality and righteousness when they revisit this issue in May.”

Simultaneous to the vote at an Irving, Texas, hotel, a prayer vigil and rally sponsored by Texas Values, an Austin-based conservative group, was being held outside the Scouts’ national headquarters in Irving, drawing several hundred people, including Boy Scouts, who were protesting the proposed change.

Chip Turner, chairman of the Boy Scouts’ Religious Relations Committee, said Wednesday he was pleased with the decision as it reflects a resolution passed by committees representing all 109,000 Boy Scout troops in America. Turner said there was only one dissenting vote as the resolution passed through three committees Monday on its way to the executive board prior to Wednesday’s meeting. The resolution asked the executive board to table a vote on the matter pending further discussion.

WORLD Magazine reported that after the Boy Scouts of Canada lifted its ban on homosexual leaders in 1999, membership dropped by half over the next five years, from about 300,000 to about 150,000.

The Boy Scouts have lost at least three corporate sponsors in recent months because of their current policy: UPS, Intel and the Merck Foundation. All cited the Scouts’ policy on homosexual leaders in their decisions. Also, two prominent Boy Scouts board members — AT&T CEO Randall Stevenson and Ernst & Young CEO James Turley — also had said the Scouts should change their policy.

When the Boy Scouts board members arrived for their meeting Monday (Feb. 4), they were greeted with a half-page USA Today ad which was signed by some of the nation’s leading pro-family groups and urged the Scouts to “Show courage” and “Stand firm for timeless values” by upholding the current policy. Organizations signing the ad were the Southern Baptist Ethics & Religious Liberty Commission, Family Research Council, Liberty Counsel, Bott Radio Network, American Family Association and Concerned Women for America. More than 40 national and state pro-family organizations signed it.

The board was considering the proposal a mere six months after it concluded a two-year review by upholding the current policy. The Scouts released a statement then that said, “The vast majority of the parents of youth we serve value their rights to address issues of same-sex orientation within their family, with spiritual advisers, and at the appropriate time and in the right setting.”

In his appearance on CNN, Page said churches “would and could” fill the gap in lost corporate financial support if the Scouts upheld the policy.

“[The Scouts] have not given the churches an opportunity to step up to the plate and support more,” Page said. “This was all a surprise to us.”

Page spoke in an interview opposite Matthew Breen, editor-in-chief of the gay publication The Advocate, in a five-minute interview moderated by CNN’s Carol Costello.

Breen accused religious groups of discrimination, saying that “nothing is less American.” However, Page said the issue is discrimination against biblical morality.

“This is about discrimination,” Page said. “It is about intolerance toward a private group who holds to biblical morality, which does reveal righteousness and unrighteousness. It’s about a systemic attempt to hurt, to change a private organization that holds to certain beliefs. That’s what this is about. It is about discrimination and intolerance toward those who hold a biblical morality. And it’s a sad day when we, they cannot express their beliefs and hold to them.”

Page said the church community was given one or two weeks’ notice that the Boy Scouts were considering a vote to reverse their policy that limits participation to those who meet certain moral standards, while the corporate community was notified far in advance.

At one point, CNN’s Costello asked Page, “What about love thy neighbor? … Do you love your gay neighbor?”

Page replied, “Absolutely. I have gay family members, Carol. And I believe in loving them, but part of love is to tell people the truth. If you don’t tell the people the truth, it is the worst form of love.”

“[W]ith the admission of homosexual Scout leaders, the BSA would place men, who by their own definition are sexually attracted to men, in close, supervisory proximity to teenage boys, which invites real human tragedies. We are not saying homosexuals are pedophiles,” Land wrote. “However, how many parents would send their teenage daughters on camping trips with heterosexual male troop leaders? They would not — not because they believe that such heterosexual men are pedophiles, but because they realize that under such close, supervisory care of men who by definition are attracted to women, human tragedies could, and inevitably would, occur.”