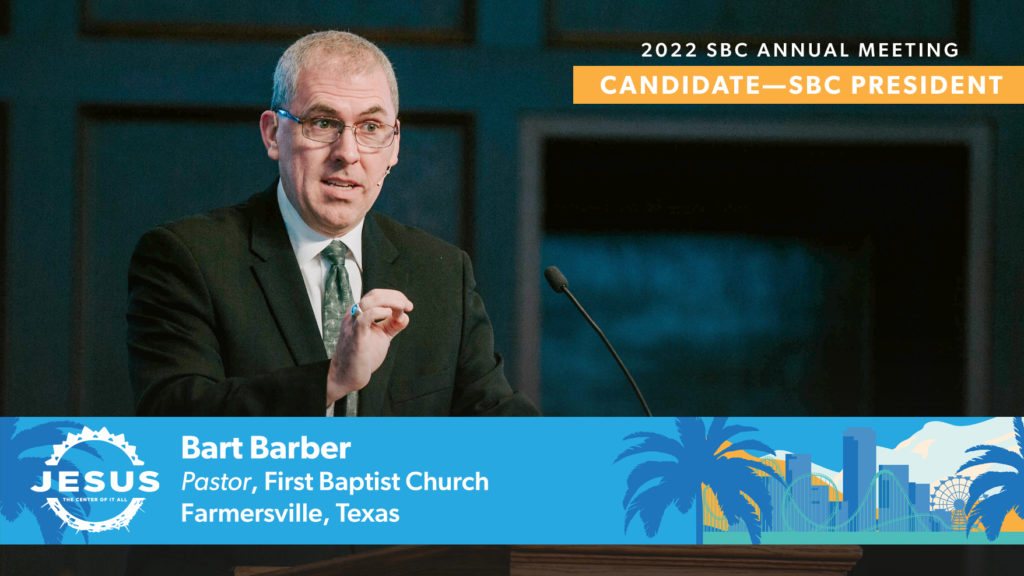 Pastor of Farmersville, Texas, First, Barber will also serve as the chairman of the Committee on Resolutions at the June meeting—a position he was appointed to by current SBC President Ed Litton who opted not to seek a second term.

“Barber is what Southern Baptists are when they are at their best,” Henslee told Baptist Press in a statement. “As a church, Farmersville, First gives generously through the Cooperative Program and directly supports missionaries and church planters. As a pastor, Barber is actively involved in the local association, state convention, and the national level of the Southern Baptist Convention. He preaches the Word faithfully, reaches the lost passionately, and truly believes Baptists are at their best when they are working together to advance the kingdom.

“Whether I was starting in ministry about 10 miles from him or pastoring churches 600 miles from him, Bart has been a phone call away for counsel or help as I navigated the ups and downs of ministry. Now as his associational missionary and fellow pastor, I have a front-row seat to a man who loves his family well, shepherds his church with care, and still finds time to encourage pastors and promote unity in our Convention.”

In addition to his leadership of the Committee on Resolutions this year, Barber served on the committee in 2021, preached at the SBC Pastors’ Conference in 2017, served as first vice president of the SBC from 2013 through 2014, served on the Southern Baptists of Texas Convention executive board from 2008 through 2014 (including serving as chairman and vice chairman), served as a trustee for Southwestern Seminary (SWBTS) from 2009 through 2019 and served on the SBC Committee on Committees in 2008. He also previously taught as an adjunct professor at SWBTS from 2006 through 2009.

According to Annual Church Profile information, Farmersville, First reported 14 baptisms in 2021 and averaged 320 in weekly worship. The church collected $1,189,783 total undesignated receipts, with $145,528 (12.23 percent) given through the Cooperative Program. The church also gave $64,713 to the 2021 Lottie Moon Christmas Offering and an additional $17,397 to other Great Commission causes.

Barber is a graduate of Baylor University and has M.Div. and Ph.D. degrees from Southwestern Seminary. He and his wife, Tracy, have two teenage children.