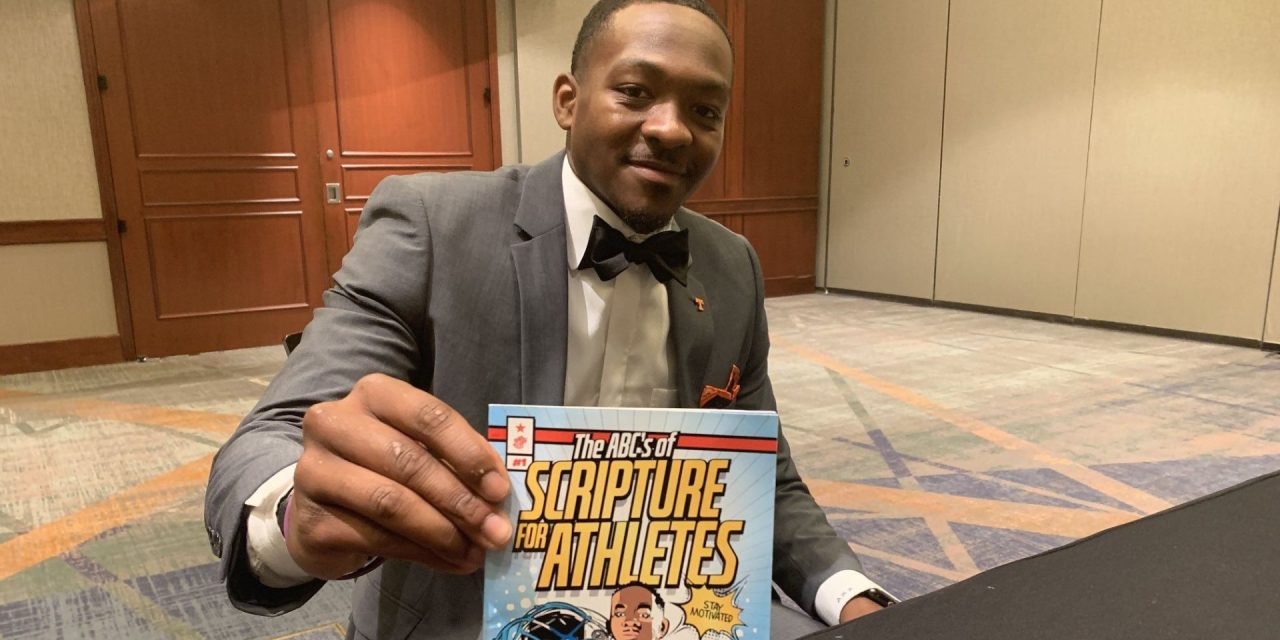 Above: Tennessee quarterback Hendon Hooker holds a copy of “The ABC’s of Scripture for Athletes,” which is based on the method for learning Scripture that his parents used when he, his sister and younger brother, also a college quarterback, were children. Photo from Twitter @CFBHeather

KNOXVILLE, Tenn. (BP) — Before he became the Heisman frontrunner leading the most feared offense in college football for the nation’s top-ranked team, Hendon Hooker thought it would be nice to write a children’s book.

That sentence can give you whiplash, much like the Tennessee quarterback’s bombs have given opposing defensive backs this season for the undefeated Volunteers. Football has always been a huge part of the Hooker family. Alan Hooker was an All-American at North Carolina A&T in the ‘80s who still holds many school records including throwing for six touchdowns in one game (something he likes to point out his sons haven’t matched). Alston is a freshman at his father’s alma mater while Hendon is in his second season with Tennessee after transferring from Virginia Tech.

But the game was merely a vehicle for something much more important when they were children.

“This sport brings tremendous challenges,” Alan Hooker told HBCU Gameday, “and both Hendon and Alston have had challenges. There are highs and lows, and the lows are sometimes lower than the level of the highs—especially emotionally.

“When they were young, they would come to my wife and me, and we did not have enough wisdom to give them words from us, so we sought the Bible. We would tell them to ‘read this, read this.’ And they started collecting those things, studying them, meditating on them.

“And so a year ago, they said, ‘Let’s do a Scripture book, and we can put them in alphabetical order based on our favorites and some of the things we’ve dealt with.’”

The result was “The ABC’s of Scripture for Athletes,” written in a comic book format and available at hookedonsports.org.

When NIL deals became a reality for college athletes last year to earn money on their Name, Image and Likeness, it led to a world where 18-year-olds received big paydays before their freshmen class schedules. For Hendon and Alston Hooker, it led their minds to those days of learning Scripture from their parents.

So, they used the opportunity to become authors. ‘The ABC’s of Scripture for Athletes, is available at hookedonsports.org.

“It’s a huge deal to me and my brother. We’re very firm in our faith,” Hendon said Sept. 28 on The Paul Finebaum Show. “… Growing up, we had these flash cards with the alphabet on it and the Bible verse to match the alphabet letter.”

Similar flashcards based on the ones Alan Hooker and his college-sweetheart-now-wife-of-31 years, Wendy, used for their sons as well as their daughter, Nile, are also available on the website.

In the Finebaum interview, Hendon went on to talk about his little cousin, Landon, who idolizes him and Alston.

“All he wants to do is play ball, so we wanted to encourage him to read a little bit more. We put some nice graphics in there to be a little appealing to the child’s eye, but it’s also a book that can be read by any age group when you’re looking to build your faith and get into a little Scripture as well,” Hendon said.

As his platform has grown, so have the opportunities to stand out. This weekend, it gets as big as it has in his young life when Tennessee faces third-ranked Georgia in Athens.

ESPN’s Kirk Herbstreit was asked the difference between the two teams on a panel this week. His answer related to football, but even more for kids like Landon.

“Hendon Hooker,” Herbstreit said, then sat quietly with nothing more to add.