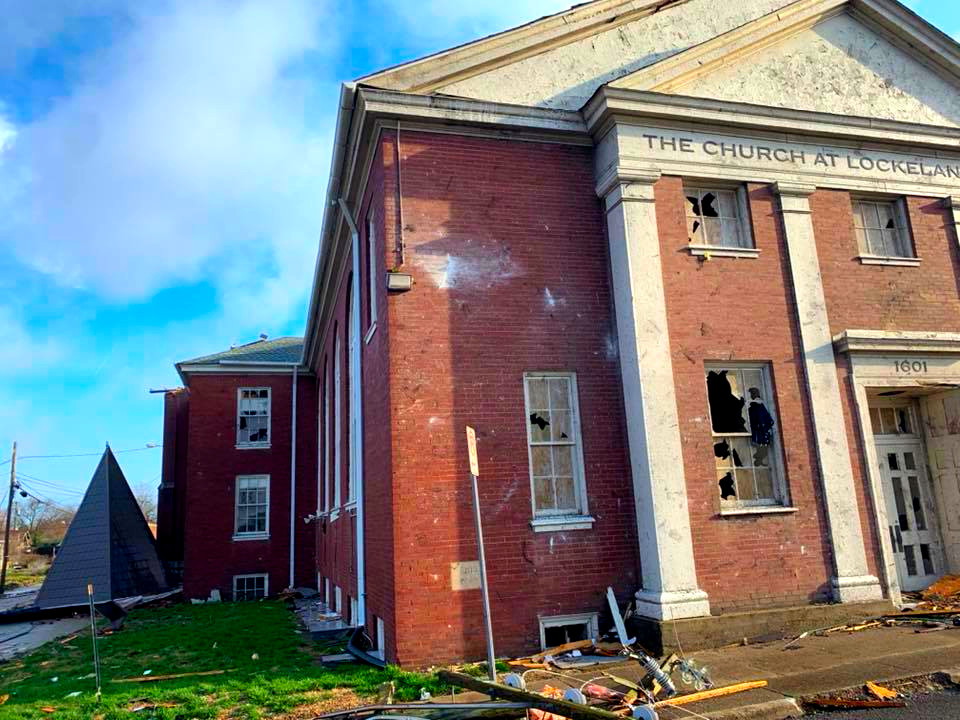 NASHVILLE, Tenn. (BP)—Pastors shared hope and faith in the midst of death and destruction early Tuesday, March 3 just after a series of tornadoes tore through middle Tennessee, killing at least 22 and heavily damaging businesses, homes and at least two Southern Baptist churches. 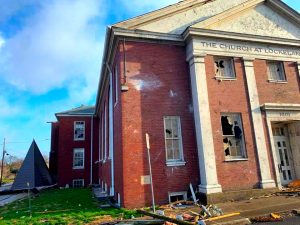 The Church at Lockeland Springs in Nashville was heavily damaged as tornadoes tore through middle Tennessee in the early hours Tuesday, March 3.
Photo from Facebook

An elderly couple who were longtime members of Mount Juliet, Tenn., First in Wilson County are among the dead, their pastor Phillip Dunn told Baptist Press (BP) hours after the storm passed, heavily damaging the church campus.

“We do know we’ve had the loss of at least one couple that did not make it through the tornado,” Dunn told BP. “And we have other church family that are assessing their own property damage, (who) have lost a home, so we’re mindful of them. And then with our facility, a good portion has been touched and damaged; we’re kind of in the direct line.”

In Putnam County, where at least 16 people died, an associate pastor praised God for the “miracle” that spared him and his family, Stone Association Director of Missions Mark Davis told Baptist Press Tuesday.

“One of our associate pastors told the story this morning … that it’s a miracle” he and his family are alive, Davis told BP. “They were right in the center of the tornado.” Associate Pastor Darrin Crockett of Cookeville, Tenn., Vinebranch Community was digging through debris that remained from his home, David said, and was not available to talk with BP.

Deaths were also reported in Benton and Davidson counties.

In Nashville, the tornado tore the roof from the Nashville Baptist Association (NBA), causing rain and wind damage inside the building. At least one church in Nashville, The Church at Lockeland Springs, was heavily damaged, said Rusty Sumrall, NBA director of missions.

“I put a call out to all the other churches, and I’ve called most the churches that I was aware was in the path,” Sumrall said, “and I haven’t heard of any other church that had major damage.”

Disaster relief teams were being assembled as early as the storms cleared, associational and mission leaders said; and church members in several communities were helping families and churches in need, pastors told BP.

Mount Juliet, Green Hill fared well during the storm, Pastor Daryl Crouch told BP, and is among those assembling volunteers to help others.

“Because we have power—we know a lot of folks don’t—we’ve opened our buildings the next three days for folks to come,” Crouch said. “There’s work space, to recharge their devices, to get free coffee and snacks. … We’ve been in contact with a lot of other pastors in our town.”

Mount Juliet, Victory is serving as a shelter. “I went by there this morning,” Crouch said, “so a lot of our pastors already know each other and are part of a coalition called Everyone’s Wilson (named for Wilson County), a group of Gospel-oriented churches that are seeking the welfare of our community.”

Cookeville, First is serving as an American Red Cross shelter, The Church on the Hill is serving as an identification center for families to identify the bodies of loved ones, and Stone Association Disaster Relief teams and other volunteers will assemble at 8 a.m. Wednesday to be dispatched to help communities, Davis said.

The bulk of the damage in Cookeville spanned a five-mile swath from east to west, and “took out a lot of neighborhoods,” Davis told BP.

“I’m super proud of our churches. They’ve come out of the woodwork and responded well,” Davis said. “In the face of tragedy, in the face of loss, we still find a way to come together as people and make sure that we’re identifying with the body of Christ.

“As many churches as we have, that are all different kinds and shapes and sizes, they all want to help each other,” Davis said. “And that is just a blessing to see in our day and age.”

“We have local teams that have already gotten out and are trying to help people in Nashville and the surrounding area,” the Reflector quoted disaster relief director Wes Jones. “Meanwhile we are working with emergency management services to better understand where we can deploy resources.”

The Southern Baptist Convention Executive Committee headquarters and the LifeWay Christian Resources building, both near the path of the storm, were not damaged. Employees are also reportedly safe. SBC EC President Ronnie Floyd asked believers to pray for affected communities.

“While reports are being updated continually, we know that families, businesses, schools and churches have been greatly impacted, and even a few tragically due to the loss of human life,” Floyd said early Tuesday. “Please pray for these families, along with others who have been impacted by this storm, and all first responders addressing all these immediate needs.”

At Mount Juliet, First, a senior citizens’ home on the church property was unscathed, Pastor Dunn said, sparing the lives of 90 residents.

“Our greatest loss is always people, not property,” Dunn said of his church that averages about 850 in weekly attendance. “Our heart now is just to pull together as a church family.

“We believe in God’s promises and all of us just really believe that this is the time to just let our light shine and love our community, put our arms around them,” Dunn said. “Buildings can be rebuilt; most importantly, we want to touch lives for God’s Kingdom, and this is an opportunity to do that.”

The names of the deceased couple in his membership had not been released.

Area Nashville Southern Baptists lost homes, DOM Sumrall said, but he has not learned of deaths among Nashville congregations.

“We’ve got crews there (at the NBA) working now,” Sumrall said Tuesday morning. “Basically, they’re trying to move stuff out of the building now, to try to save stuff.”

Sumrall encouraged Southern Baptists to pray for pastors and churches.

“There’ll be a lot of church members who were affected personally,” Sumrall said. “And I think that will be the greatest thing, just to pray for the churches as they minister through the crises.”

About 160 residents of middle Tennessee sought medical help at hospitals after the tornado, according to news reports.

The damage affected voting in Tennessee, one of 14 Super Tuesday states. While many polling sites remained opened, others were consolidated and some opened an hour late, election officials said.