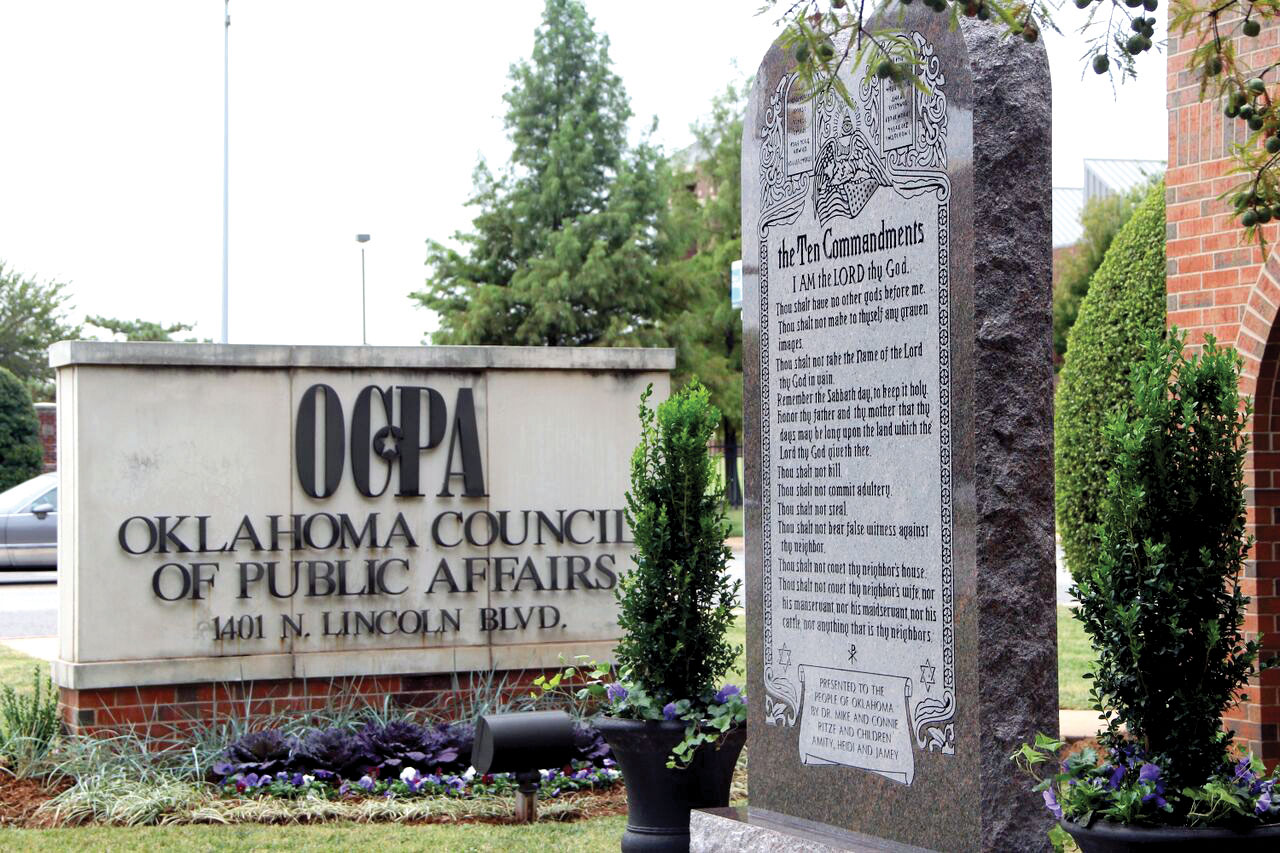 Gov. Mary Fallin, state Rep. Mike Ritze and the Oklahoma Council of Public Affairs (OCPA) announced Oct. 6 the relocation of the Ten Commandments monument from the Oklahoma State Capitol to OCPA’s campus, on private property 10 blocks south of the capitol.

The Oklahoma Supreme Court ordered the monument to be removed from the Capitol grounds in June, saying the Oklahoma Constitution prohibited the state from displaying it. The state appealed that decision but could not get the Supreme Court ruling overturned.

Fallin thanked OCPA for housing the monument and said she would work with lawmakers to put a proposed Constitutional change to a vote of the people, allowing the monument to eventually return to the Capitol.

“My thanks go out to OCPA for providing a temporary home for the Ten Commandments monument that is easily accessible to those visiting the Capitol,” she said.

“Moving forward, I believe the people of Oklahoma should have the opportunity to vote on a proposed Constitutional change to ensure that historical monuments like this one are not pushed out of public spaces. I strongly encourage lawmakers to take up this issue in the next legislative session.”

Fallin also offered thanks to Ritze, who raised the private dollars to create the monument and then gifted it to the state. Ritze said he would continue the push to bring it back to the Capitol by repealing the Blaine Amendment, the section of the Oklahoma Constitution cited by the court when it ordered the monument to be removed.

OCPA is a public policy research organization that focuses on state-based issues from a perspective of limited government, individual liberty and a free-market economy.

/// HOW DID THE JUSTICES VOTE?

In June, the Oklahoma Supreme Court voted 7-2 in favor of removing the privately-funded 10 Commandments monument from the State Capitol grounds.

After multiple legal challenges and public debate, ranging from detractors of the monument including the ACLU and supporters including Gov. Mary Fallin and Attorney Gen. Scott Pruitt, the Court ordered the Monument affirmed its decision to remove the monument.

Regarding the Court decision, the following information relates to how justices voted.

The following Oklahoma Supreme Court Justices are up for retention on the November 2016 ballot (note: parenthesis indicates the Governor who appointed them):

For more information about the Oklahoma Supreme Court, visit www.oscn.net.