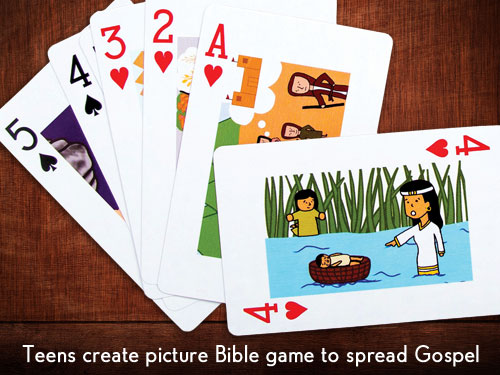 EAST ASIA (BP)—The middle-aged man smiles and makes a quick bow of greeting to the small audience. He reaches into his left coat pocket and pulls out a deck of playing cards.

Ben Lim’s* eyes twinkle as he shuffles the deck. He fans the cards out in his hands and tells a random person in the crowd to, “Pick a card . . . Pick any card!”

A hush falls over the audience as a young Chinese man pulls one from the deck. Ben instructs him to look at it but not to show anyone. Then, Ben asks him to act out the picture on the card. The young man gets down on all fours, puffs out his chest and roars.

“LION!” the group screams in unison.

Ben smiles and grabs the card. He flips it over for everyone to see. It’s the ace of clubs with a picture of three lions surrounding a man at the bottom of a den.

“Anyone know a story about a lion?” the Christian worker in East Asia asks. “No? Then, let me tell you the story of Daniel and the Lion’s Den.”

That’s when the true magic begins . . . God’s Word falling on ears that are hearing the Bible for the first time. Ben, a master storyteller, takes the audience through the trials of walking by faith and not sight. The rise and fall of his voice depicts emotions and fears when confronted with problems (like hungry lions waiting to devour). His peaceful cadence and soft, confident tone assures that God is always present when we have problems and call on Him.

The story ends and everyone looks at Ben, waiting for another. He smiles and fans the cards out again. In his hands are 51 more pictures depicting Old Testament scripture. Another deck in his pocket has 52 stories from the New Testament. The collection is a unique pictorial Bible covering everything from Creation to Christ. The uniqueness isn’t simply because this wordless Bible is found on a combo-pack of playing cards but by the fact that Ben’s teenaged daughters, Jasmine* and Jamie* (plus one of their friends), drew the pictures.

“I can’t begin to describe what it is like to use an evangelism tool developed by your own kids. It’s like WOW man! It’s beyond our imagination because only God can do this,” the church planter from Oklahoma says. “All over the world, people are using these cards as part of evangelism and discipleship training.”

The teenagers spent hours last summer pouring over the different scripture passages that Ben uses as part of the “Storying Training for Trainers” (S-T4T) program. This approach combines oral communication with methods of evangelism and discipleship, training local believers to share their faith with family and friends.

“There are so many people here who haven’t found Christ. The burden is on us to spread the Gospel,” Jamie says. “If drawing pictures is the way to lead people to Him, then it’s something you just gotta do!”

For the Lin family, ministry is always a family affair. Even from a young age, Ben and his wife, Ellie, involved their children in ministry by giving them age-appropriate projects or tasks, helping them gain a heart for the nations and the confidence to share the Gospel. Their goal is to always get their children to imagine the impossible and be creative in using their gifts for God’s purposes . . . even when it involves drawing 104 pictures in one summer vacation.

The 17-year-old sighs and admits it was a lot more work than she anticipated. They’d read and study a scripture passage and then ask God to show His work through their pictures and not just draw whatever they wanted. The budding artists decided to use a popular medium in Asia, cartoon characters. Despite all of the preparations, it often took several drafts to get it right.

Putting these pictures on playing cards was a natural choice for the girls. Everyone has them in their homes. Playing games, especially cards, is a big social activity in this part of the world. Jamie points out that this love for games made it the perfect way to present a “picture Bible.” Not to mention the fact that in some areas of East Asia (like China), it is illegal to give someone a Bible. But, Jamie adds, you can give them a deck of cards.

Ben uses the combo-pack to train local believers in sharing Bible stories and planting the Gospel. They can use it as an “ice breaker” like he often does, as a game, as Bible story flash cards or there’s even a short presentation from creation to Christ that only uses nine cards. Ben’s favorite way, though, is to teach about the character of God and life lessons through the pictures. He works his way from creation to Christ and even teaches how to become an “Acts church.” Among the minority people groups that he works with, it has become so popular that Ben recorded all 104 stories as MP3s to accompany the card packs.

More than 5,000 churches throughout East Asia have adopted this unique evangelism tool, creating a new project for Jasmine and Jamie this summer—helping their parents train others to use the cards and share the Bible stories.

“People are going to see how creative God is and amazing He is through these stories,” Jamie says, shuffling through the New Testament. “Just pull a card out of the deck and you can share about a different characteristic of God or a different Bible story.”

* Real names are not used