From gangs to God 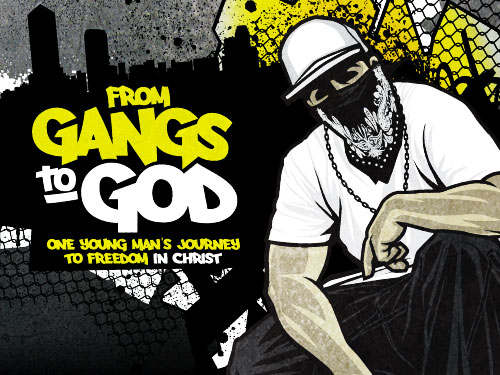 Steve (Not his real name) is a budding rapper who found himself ensnared by the chains of the gang lifestyle, feeding off of the euphoria created by the “respect” he felt he earned by stealing cars, breaking into homes and selling drugs—basically doing whatever it took to please the older members of his gang “family.”

Those delusional chains gripped him tighter and tighter until he finally was arrested after running away from home, lying to the police and facing a number of criminal charges—all at the age of 15.

But, a couple of weeks ago, this soft-spoken resident of the area known as The Flats in Oklahoma City got a reprieve from a source he never once had considered; and it came while he joined with thousands of other teens in singing a song in the R.A. Young Tabernacle at the Falls Creek Baptist Conference Center.

Steve’s journey to a transformed life actually began about 10 years ago.

Ernie Tullis, pastor of Oklahoma City, Tri-Church, recalled when he and his sons would drag two basketball goals out in the street, “and the whole block, including Steve, would come out and play ball.

“Later, I lost track of him for a couple of years. He just wasn’t around. Then,  three weeks ago, I saw him mowing my neighbor’s yard. I walked over to him, greeted him and we started talking.

“I said, I haven’t seen you in a while and his head dropped and he said, ‘Yeah, I’ve kinda fallen into some things.’

“He began to tell me about gang-banging and selling drugs, being shot at, shooting back and that sort of stuff. He told me, ‘I’ve got to stop doing the wrong things.’ I told him trying to stop doing the wrong things is like putting  Band-Aids on a decapitation; it’s exhausting and it doesn’t work. What we have to do instead is put the good inside you, and the good will replace the bad.”

Tullis told Steve he needed to meet Jesus, and invited him to attend camp with the group of 16 other youth his church was taking.

“It was the third night of camp when he walked over to me at the end of the worship set and said, ‘Something’s going on, this last song we’re singing, I’m not singing it, I’m just moved to tears from the inside out. I don’t ever cry, I’m strong, I’m tough,’” Tullis recounted.  “I said, let’s take a walk.”

The two of them sat outside the tabernacle and Tullis asked Steve what was going on.

“He said, ‘I don’t know, I just know something’s happening on the inside.’

“I said that’s God’s Holy Spirit within you and this is your chance; this is your chance to put the good in you that will displace the bad, because God is saying, ‘Steve, I love you so much that, if there was only Steve in this whole wide world, no matter what you had done, I still would have sent My Son, My one and only amazing Son, for you, just you.’”

Steve pondered the immense significance of that reality, then asked Tullis, “Well, what do I need to do?”

“You need to pray and receive the gift of God’s Son,” Tullis answered.

Steve’s prayer that day went like this:  “God, I’m tired of being my own boss, because I always mess it up. You be the Boss. I receive the gift of your Son. I believe that He loves me and that You sent Your Son for me. Make me Your child, and You be the Boss.”

“Then he smiled at me with these big ol’ wet eyes and began rapping about what just occurred,” Tullis said. “I asked him to write that down later so we could record it. And, at that moment, old became new.”

As for that moment when he prayed that prayer, Steve said, “It was like a big release; like being able to accept God. It was a moment that I didn’t really expect, because I didn’t feel my life was heading for anything else besides going to jail or ending up dead.

“That night when that happened I was sitting there like any other night, and we started to sing the song. I looked up at the lights, and my vision began to go blurry; then I couldn’t clear my throat and I began crying.

“I had never felt that before. And even though as many times I have messed up in life, I feel like God wanted to give me another chance.”

Steve hopes to one day make a living as a professional musician. But first things first. As a sophomore to be at Northwest Classen High School this Fall, he plans to take drum lessons from Tullis during the school year and hopes to play baseball for the Knights next Spring. He also will begin boxing workouts at a local gym this month.

While he has a talent for rhythm and rap singing, at Falls Creek, God used the popular title worship song off a Matt Redman album—”Bless the Lord”—to remove the scales from the Oklahoma City native’s eyes and bring him into the light.

In a very real sense, Steve did die at a camp in the Arbuckle Mountains. He has rejected his old life and has slipped the chains that tied him to his gang “family.”

“I used to do whatever it took to make money,” he confessed. “Some people in gangs have never held a job their entire life. You do whatever they say to make money, whether it’s stealing cars, home invasions or selling drugs. You’ve got to make money; bills have to be paid somehow.

“They’re expecting us to put food on the table for them. A lot of them have children and are convicted felons. It’s really hard to get a job when you’re a convicted felon. I did what I had to do, and I’m not proud of it, but that’s just the way it played out.”

Now, he is grateful for his new-found freedom in Christ.

“I’m happy to say that, at such a young age, I am lucky to change so soon. For sure, I have made it a positive thing that I’m no longer in that lifestyle,” he said. “I thought it was cool while it lasted to have money, drugs, girls, respect and everything, but when you’re locked up, it all ends. When I was in there, nobody came to see me or wrote me a letter.

“I have Ernie to thank a lot because everything I have gone through and getting arrested was the wake-up call I needed to realize I was doing wrong. It wasn’t going to last forever, and I was eventually going to wind up in one of two places, either in jail or dead.”

He has made a pledge to Tullis, himself and to the Lord to attend church every Sunday.

Having learned a lesson from his pastor, he said, “I am going to focus on the good and positive things, not try to avoid the bad,” he stressed.” When I graduate from high school, I plan to apply to go to the Academy of Contemporary Music (A two-year, junior college program affiliated with the University of Central Oklahoma).”

He is confident he has changed the course of his life.

“I’m not out on the streets anymore. I work with my dad, and I go to a gang prevention and mentoring program on Mondays and Tuesdays,” he said.

His turnaround has been a big relief to his father, too.

“My dad always said he didn’t want to have to go visit me through a glass window 10 or 20 years from now,” Steve recounted. “When I gave him the news about how I got saved and accepted Christ into my life, he told me he was happy for me and was proud of me.

“That was something good to hear from my dad. His face just lit up into a big smile.”

Steve hopes others like him also can make their way out of their bondage through salvation in Christ.

The Flats, an area bounded on the north by Northwest 10th St., the south by Reno Ave., the west by May Ave. and the east by Pennsylvania Ave.,  has a median annual income of $12,000, Tullis said.

“It was started in the early 20th Century when Oklahoma City pumped water in there and people moved there in tents, and nothing has changed,” he said. “We’re now in the third and fourth generations of ignorance, poverty and spiritual darkness. It’s a neighborhood full of people who just need a chance.”

Tri-Church was planted there in 2010 with 12 people, and has grown from 12 to 70. It meets at Mark Twain Elementary School.

“Our growth has been entirely by baptisms,” Tullis said. “We literally have seen whole families come to Christ and learn and work.

“The neighborhood is used to slash and burn evangelism, where people come in, do a rally and get some people saved, and then leave and their situation doesn’t change.

“So, it’s new for a church to be in the school and working with the school saying ‘We’re here; we’re going teach you how to raise children and teach you how to work. We’ve had many families come to the Lord who previously were on public assistance who are now working.

“At Tri-church we teach three things, God loves you, wants you to be His child and you need to learn, learn, learn so you can work, work, work.

“It will take a generation to change the neighborhood; (for) the kids we’re reaching now to graduate college and come back to serve in the church. But, it’s happening, and it’s exciting.”