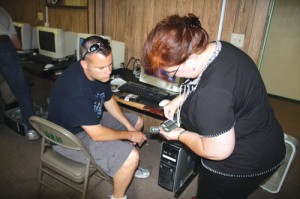 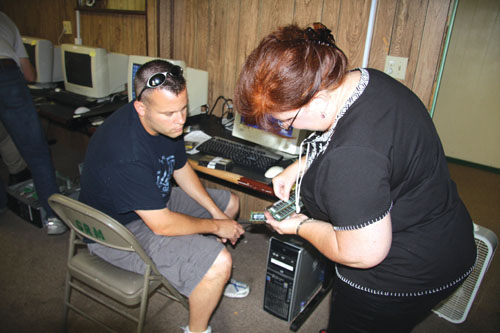 Imagine having no job, limited computer skills and then having to contend with hundreds of others for a few minutes of time on the only available computer in the neighborhood to somehow fill out a job application.

That was the dilemma faced by the 120 guests of Grace Rescue Mission, a ministry of Capital Association, at 2205 Exchange Ave. in Oklahoma City, and a situation that weighed heavily on the heart of mission director Scott Allen.

For six years, Allen had a “pipe dream” of providing computer access to the center’s guests. On July 20-21, that dream became a reality as members of the Baptist State Technology Group (BSTG) converged on the center prior to the group’s annual meeting to create a six-station computer lab and build a local area network for the mission center’s staff.

The BSTG is made up of the technical support professionals serving Southern Baptist state conventions across the country. About 15 of them from 11 states gathered here July 22-24.

John Pitzer from South Carolina is serving his first term as president of the group, of which he has been a member seven years.

Of the group’s mission project, he said, “It’s incredible. Very satisfying work. We did a similar project at Yellowstone Baptist College in Montana two years ago. I would prefer to do it every year, but we’re settling for every other year right now. To me, this is more important than just getting together to meet.

“It’s just an awesome feeling when you walk away from this knowing it’s something they could never afford on their own.”

Oklahoma’s Charlie Loper did the groundwork for the Grace Rescue Mission project, which includes nine computers with Internet access.

“Right now there is only one machine in an area library with Internet access, and people from all of the local businesses go stand in line to use that one machine,” Pitzer said. “This will enhance the guests’ job hunting abilities over the Internet, of course.”

“Internally, it is giving them a network, with a server that allows for file sharing, which they have never had before.”

“The other big advantage they gain is the server site because they have had no way to store and share documents between staff or to secure documents in the past,” Loper said. “That will be a significant advantage to them. Plus, they will be able to back those files up regularly now, and this will allow them to use much higher-end equipment.”

BSTG members brought in most of the equipment for the project with them.

“Almost everyone brought something in with them,” Loper said. “The average per state was about $500. With parts and labor, the value of the overall project comes to around $15,000.”

Pitzer said he is always amazed at how much work the group is able to accomplish.

“What we do in the length of time we do this in always amazes me,” he said. “It’s a God thing for us to be able to pull these off in the day-and-a-half to two days we have to do these.”

Prior to the BSTG mission project, the only computers the mission had were two in Allen’s office and another in the lobby, which was used solely for registering clients into the facility, plus two others in the Mission Center across the street in the Baptist Mission Center.

Both Loper and Pitzer said the project gives them a chance to directly improve people’s lives by using the talents God gave them.

“Yeah, that’s what’s cool,” Loper said. “And, it’s just like it was in Montana. All of us are used to doing things in our own way, but we are setting all of that aside and working together as a unit to accomplish a bigger goal.”

“You’ve got all of these bosses tossing aside their egos and working together,” Pitzer agreed.

Meanwhile, the real focus of the BSTG conference is “just to get together to share common concerns and ideas about how we can do our jobs better,” Loper said. “To share our knowledge about technology, for example, so we don’t all duplicate efforts.”

As the computer lab and office network installation neared completion, Allen took it all in and said, “I am really excited about the potential this presents for the guests here at the mission. They will now have the opportunity to surf the Web for job opportunities and to be able to fill out online job applications, which seems to be what so many companies are going to these days.”

“This is a pipe dream I have had for six years. Considering that this was more of a luxury item than a necessity, it was not something that was a front burner issue that we pushed to really see happen, although it has been a dream of mine because of the potential benefits of the men living here.

“So many people around the Association have said that if we had a computer lab, they would be more than willing to come down and teach classes. To teach basic skills and things like that. I’m just really excited about this.

“As soon as we get the core group of people who are going to manage and supervise this system trained, we’ll start making plans to get our guests involved. We also have set in place measures to ensure security of searching the net for inappropriate materials. I have been assured that we have a filter that will make it virtually impossible to access inappropriate Web sites. That was my major concern, and I know that would be many other people’s concern, too.”

Allen said the computer lab, which is located on the second floor of the mission, will not only benefit the mission’s guests, but also will be a boon to the community in a sense.

“This lab will pull Grace Rescue Mission out of that mix of people who have to wait on that one local area computer, so it will be a benefit to the community, too,” he explained.

Because the lab is upstairs and past a couple of security check points, it cannot be opened up to the community at large, however.

“My gratitude to these people right here is immense,” Allen concluded. “They’re an answer to prayer. It’s amazing what they have been able to do.