Take the Name of Jesus with You 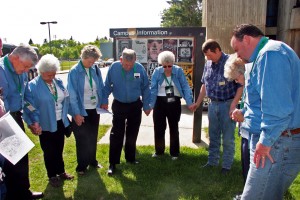 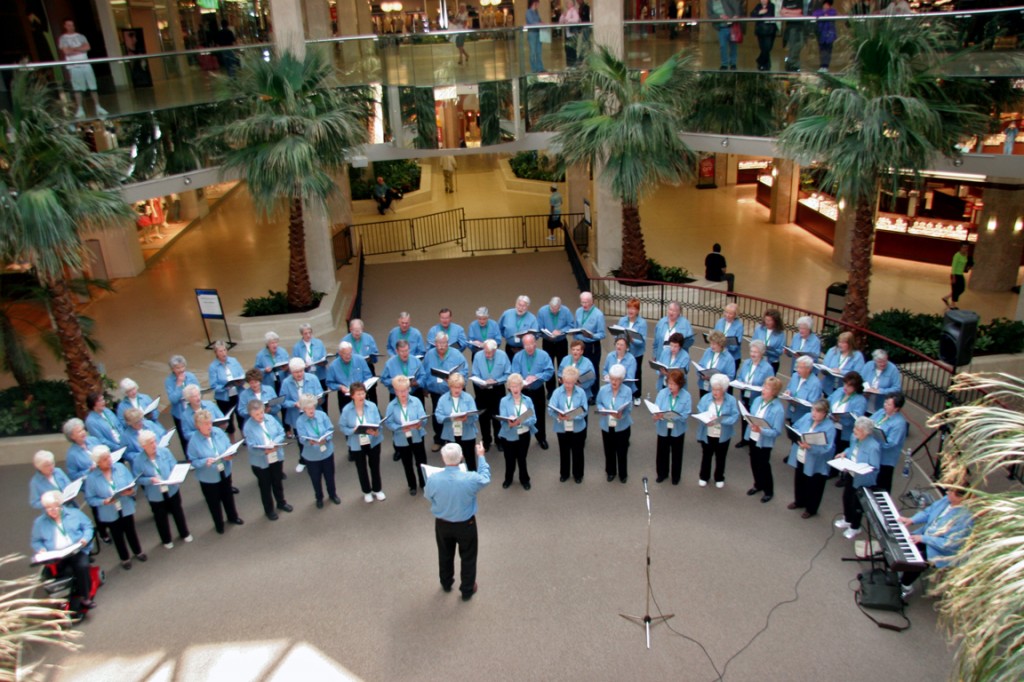 Wearing their matching denim shirts and green lanyards, choir members were greeted first by curious stares, then friendly smiles as Canadians welcomed the Oklahomans to their country.

Doors for sharing the Gospel were opened as the Southerners spoke, and the Canadians, with English or French accents, inquired where the slow-speaking folks were from. On several occasions the encounters led to impromptu concerts. In a gift shop, the cashier said he wished he could hear the group sing-and they did just that, gathered around shelves of Canadian maple syrup, sweatshirts and maple leaf-shaped cookies and candies. Several times, they were asked to sing at the motels where they stayed on the 10-day trip through British Columbia and Alberta. 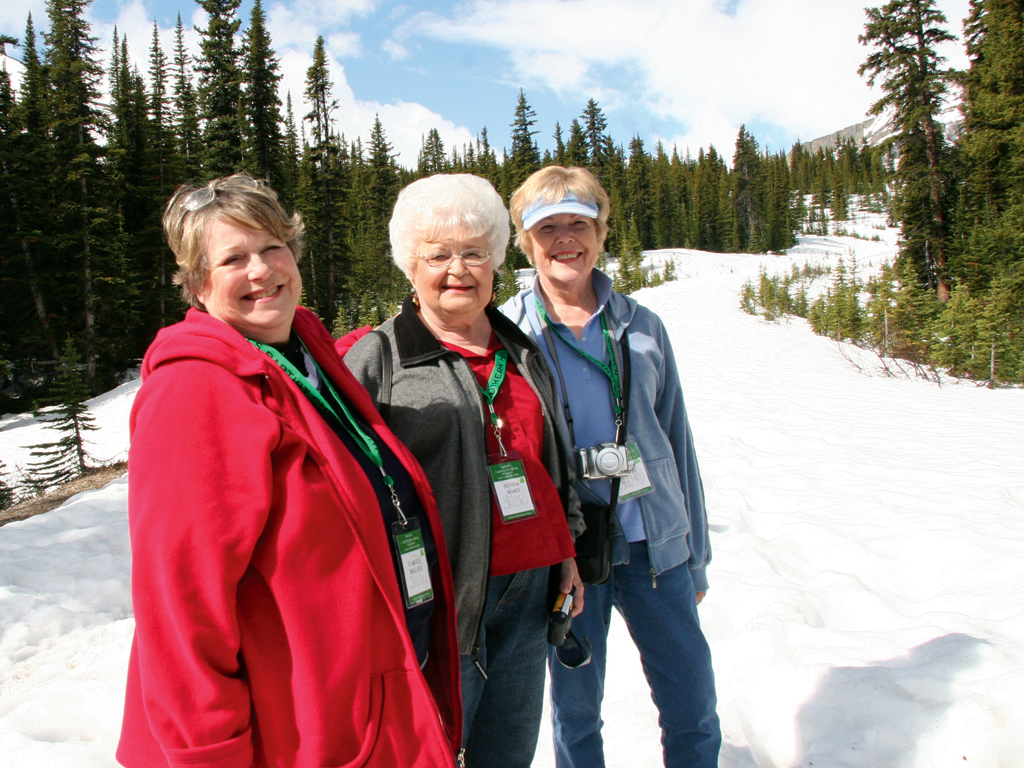 The 58-singers, their spouses and guests were in Canada for a “Hold Up the Light” tour and to help Grace Family Church in St. Albert, Alberta gather prospects for planting churches. After a couple of days touring in the Canadian Rockies, the choir settled in St. Albert for four days of concerts, prayerwalking and scouting for “persons of peace” to join Grace Family Church in spreading the Gospel.

Southern Hills’ connection with Grace Family Church came about when D.K. Hale, volunteer missions coordinator for the Canadian Southern Baptist Convention, came through Oklahoma to share the need for evangelical work in Canada.

“Our church had been to Asia, South America and Mexico, but never to Canada,” said Jeff LeDuc, minister of missions and evangelism. “When we got a call asking for help in dry wall work at a new mission center in Cochrane, we sent six men.”

That led to a liaison with Mike McElroy, pastor of Grace Family Church, who needed some help with a summer sports camp. Southern Hills members spent the last three years aiding in that endeavor.

“When people came back from the last sports camp with testimonies about reaching children, I was impressed with a need for reaching adults in the area,” said David Gibson, Southern Hills’ senior adult minister. “That’s when the idea of a senior adult choir tour was birthed. I thought we might have 40 sign up, but we ended up with 75.” 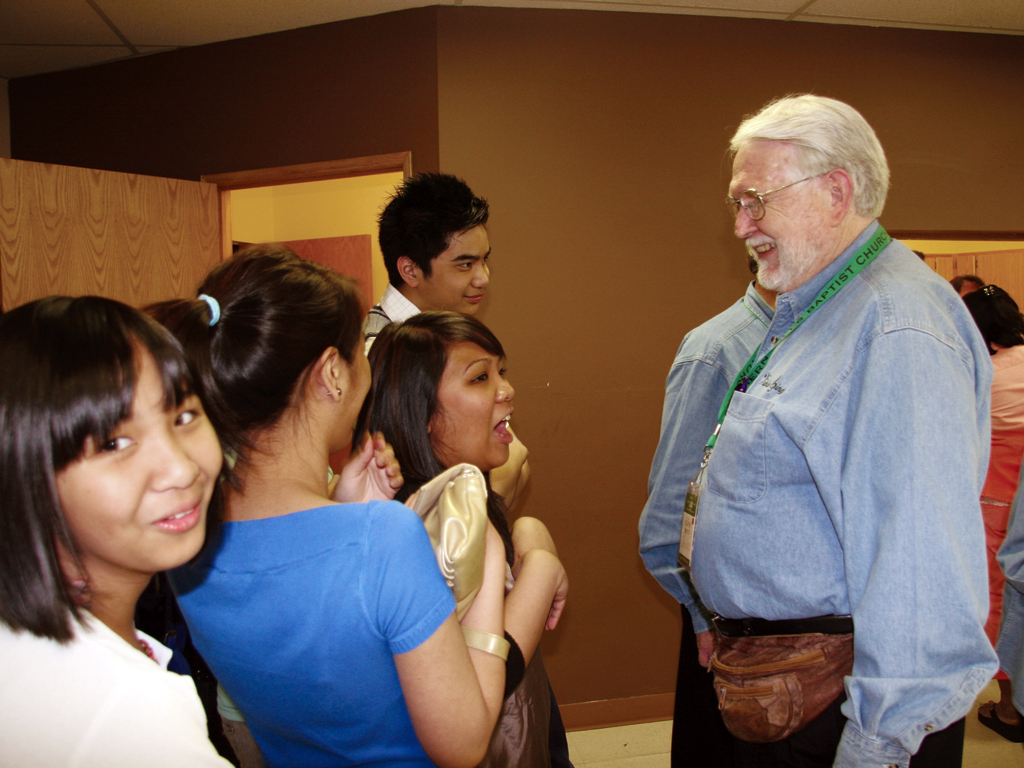 The first official concert was in Edmonton in the largest mall in North America. From that performance, several prospects were discovered for Grace Family Church. From there, the choir sang at a Cowboy Church, in the morning worship service at Grace Family Church, at a Filipino worship service, at a school in Boyle, north of Edmonton, and prayerwalked around the church, in another shopping mall and at the University of Alberta.

Greg Idell, who grew up in Oklahoma and served in the Baptist Collegiate Ministries program in the state, serves on the university campus as a Baptist chaplain. He told the group that several religious groups, including Muslims, use the room where Bridge Church, sponsored by the BCM, meets.

“There are no BCM buildings in Canada,” he explained. “There are only six university church plants across Canada.”

Idell said presenting the Gospel in Canada is tough.

“You can talk to Canadians and have an initial good conversation, but getting into the living rooms of their hearts is more difficult,” he said. “You can’t start with John 3:16. You have to start with Genesis 1 and prove there is a God.”

“In Canada, 90 percent of the time, people are not remotely close to a discussion about Jesus, sin and the need for redemption,” he said. “Generally, you have to start with creation, and teach them about God.”

McElroy said people in Alberta don’t understand who Baptists are.

“We live in a secular society influenced by modernism,” he said. “Although we had 40 church plants last year, we have only 271 Southern Baptist churches in the whole nation.”

McElroy said Southern Hills had a significant part in the sports camps, and the church couldn’t have accomplished what it did without their help.

“In addition to this group helping find prospects for our church, we now have 75 people who can go back and tell our story,” McElroy said.

On the way back from St. Albert, the choir stopped at the Canadian Southern Baptist headquarters, mission center and seminary in Cochrane, where Hale is now serving as head of Canada Arms of Love.

He told the group there is one Canadian Southern Baptist Church for every 170,000 people. 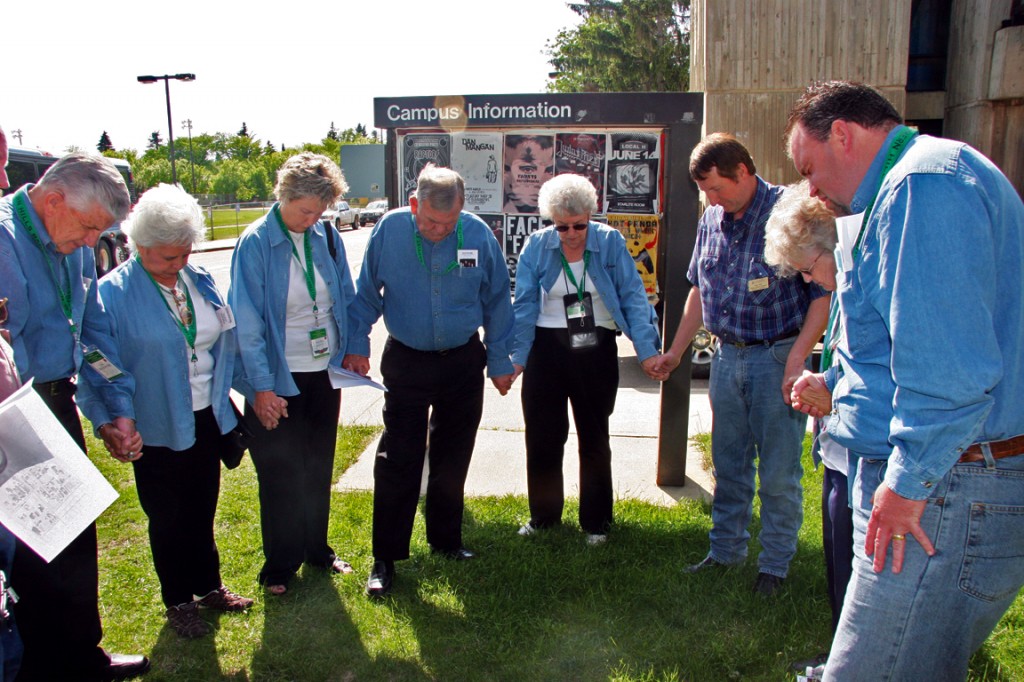 “Canada is the most ethnically diverse country in the world,” Hale said. “You can drive for two days between Southern Baptist churches here.”

LeDuc said most of those on the trip had no idea how tough the work in Canada is.

“Our goal wasn’t just to minister and be ministered to, but for the group to catch the vision for our neighbors to the north and the great spiritual need there is just over the border,” he said. “Most of our people had no idea how few Southern Baptist churches there are in Canada.”

LeDuc pointed out that as usually happens on mission trips, spontaneous things occur that exceed expectations.

“There were such sweet times in the presence of the Lord, when some of our choir members couldn’t even get through the songs because they were so touched,” he recalled. “We even found prospects for our own church through encounters on the plane.”

“The pulse of our church is all about missions,” he said. “In addition to our world missions offering, we have a budget item for mission trips, so people can go at a reasonable cost and don’t have to raise funds.” This year’s missions ministry budget is $609,564.

Last year, Southern Hills’ world missions offering goal was $325,000, and members gave $338,553. That is divided 50 percent to IMB, 30 percent to NAMB and 5 percent each to Oklahoma, World Hunger, Oklahoma Baptist Homes for Children and Southern Hills.

“Our Jerusalem is our weekly visitation and English Corner, which ministers to the international community around our church,” LeDuc said. “Judea includes helping local churches; Canada is Samaria, and the utter most parts is our partnership with Cambodia, which we hope will be a long-term project.

“One great thing about the Canada trip is that it is contagious,” LeDuc said. “Our members were excited to hear about it. Now, there’s the hard work of keeping that excitement.”