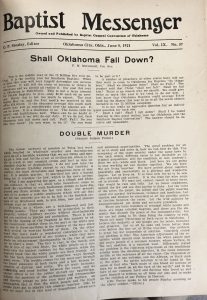 As the Centennial of the 1921 Tulsa Race Massacre draws near, Oklahoma Baptists can and should pause to recognize and reflect on the significance of this moment.

To their credit, many pastors and churches in the Tulsa area and beyond have been fully participating in the Centennial proceedings, which include times of education, conversations, commemoration, meetings, prayer and more.

Truly, the Tulsa Race Massacre stands as, not only one of the most horrific acts of violence and tragedies in Oklahoma history, but in American history as a whole. For those less familiar with the history of the occurrence, author Randy Krehbiel, in his important book, “Tulsa 1921,” offers this summary.

“In 1921 Tulsa’s Greenwood District, known then as the nation’s ‘Black Wall Street,’ was one of the most prosperous African American communities in the United States. But on May 31 of that year, a white mob, inflamed by rumors that a young Black man had attempted to rape a white teenage girl, invaded Greenwood. By the end of the following day, thousands of homes and businesses lay in ashes, and perhaps as many as three hundred people were dead.”

Historians are still uncovering the full extent of the massacre. We can now also read comments made in the news that contributed to the massacre and reveals blatant racism that shows how an evil like this happened in the first place.

Fortunately, not all acted or spoke unjustly at the time. In fact, a number of churches opened their doors for refugees from the destruction, offering healing and help to the directly affected.

Still others spoke out courageously. Samuel Judson Porter, who was a pastor in Oklahoma City, composed an editorial for the Baptist Messenger, published on the front page of the June 8, 1921 issue, with strong words of condemnation of the massacre.

He said, “The violent outburst of passion at Tulsa last week which resulted in the wholesale murder and incendiarism gives us all a horrible warning that we are living and moving on a thin and brittle crust of civilization which is liable to crash at any unusual strain and hurl us into unplumbed depths of degradation.”

Porter went on to condemn the brutal practice of lynching, calling it “double murder” because it murders a human being and the law itself. He also spoke about a day in which justice and racial harmony could occur, the enormous task still with us to this day. We applaud that courage to speak up in the immediate aftermath.

We also applaud the Oklahoma Baptist pastors and churches (and others) who are actively seeking, in our own times, to be part of the healing that needs to take place, during the Centennial and beyond.