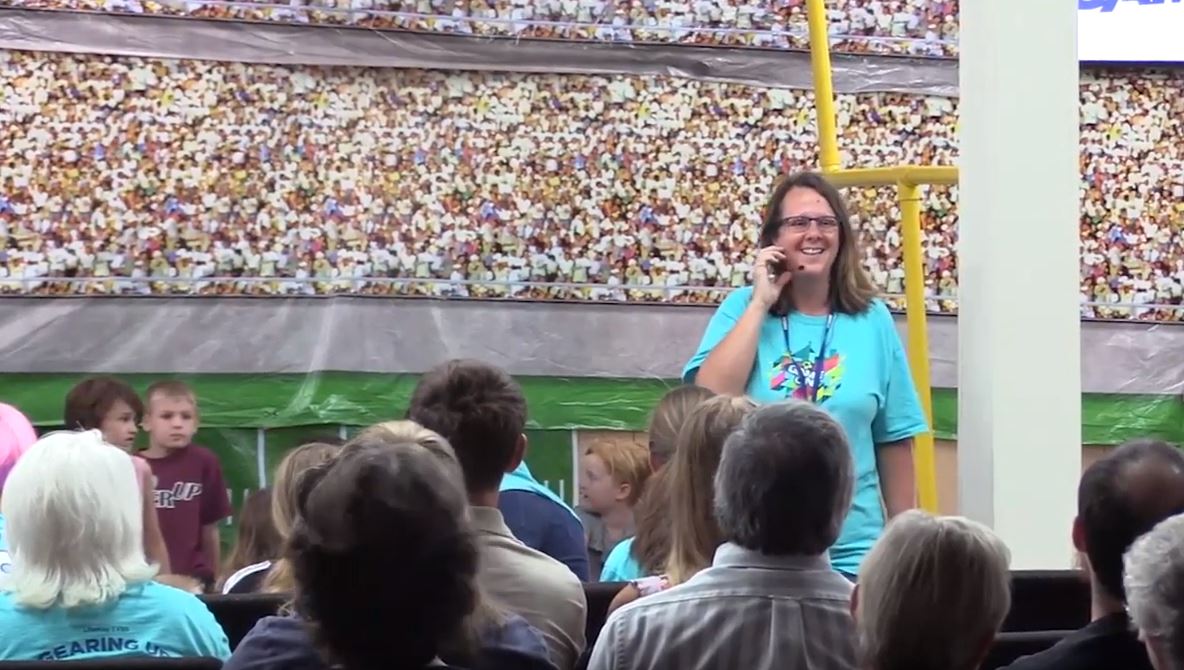 SUTHERLAND SPRINGS, Texas (BP) — When First Baptist Church of Sutherland Springs kicked off their annual Vacation Bible School the week of June 3, it looked profoundly different from two years ago.

Sherri Pomeroy, wife of Sutherland Springs Baptist Church pastor Frank Pomeroy, helped lead out in the church’s VBS in 2018, only months after the church suffered a devastating tragedy. “We knew we had to do it not only for the Lord, but to honor the memories of those who were gone,” she said. Screen capture from LifeWay video

On Nov. 5, 2017, a gunman entered their sanctuary, opened fire, and took the lives of 26 people. Several of those who lost their lives were instrumental in the VBS ministry of the church in Sutherland Springs, Texas.

“VBS takes up a large portion of our year, because we do VBS big,” said Sherri Pomeroy, wife of Sutherland Springs pastor Frank Pomeroy. “Everybody around here knows this church produces an amazing VBS event every year and all the kids want to go to it.”

Among those killed was the Pomeroys’ 14-year-old daughter Annabelle.

“VBS was her favorite event of the year,” Sherri said. “She loved having the DVD after VBS was over and being able to do the moves along with it. She loved playing with the other children and was excited about being a helper for the first time &#91;the following summer&#93;.”

As the early months of 2018 rolled around, the leadership of Sutherland Springs had to make a tough but necessary — decision: They would once again host VBS, despite the painfully obvious voids.

“We didn’t want their work in the years past to be in vain,” Sherri said. “But it was tough. We had all new teachers — people who stepped up to stand in the gap. We knew we had to do it not only for the Lord, but to honor the memories of those who were gone.”

Jennifer Holcombe is one of the Sutherland Springs members who stepped up. She lost her husband, her 18-month-old daughter and several other family members in the attack.

“I knew we had to keep going and not stop doing these things to be able to heal,” Holcombe said. “Some of what we do is to keep it going for them. For me, if I could do it, I wasn’t going to say ‘no.’ I had to do it to keep myself going.”

Karla Holcombe, Jennifer’s mother-in-law — described by Sherri as the “creative genius” behind the VBS décor year after year — was among those lost during the 2018 attack.

Karla’s daughter, Sarah Slavin, recalls a pivotal moment of healing during the 2018 VBS week — an event that seemed impossible to carry out, given the searing loss of her mother, father and brother who all died in the shooting.

“My mom was very involved in Vacation Bible School when she was alive,” Slavin said. “And my dad (Bryan) would always make lots of props, and my brother (Danny) always made props. I couldn’t imagine VBS without them. But I realized the Holy Spirit was the one doing all this that I gave them credit for.”

Pastor Frank Pomeroy noted the Holy Spirit has not only been working in the church and the surrounding community to heal them, but He’s also been working through VBS to bring healing — and maybe a little joy.

Between 40 and 50 children attended VBS at Sutherland Springs last summer — the same number that had attended in years past, Sherri said.

This year attendance doubled — they ran out of 100 nametags.

“VBS — at least in our church — has been an outreach to the community,” Frank said. “Not only have we reached children, parents and grandparents — and had parents come to know Christ through VBS — but people came together to pull it off.

“You could be in here every morning during the worship rally,” he said. “You could feel the Spirit moving in these kids. But I would even venture to say the 2018 VBS was more for the adults of Sutherland Springs than for the kids.”

And while the VBS leaders, volunteers and kids of FBC Sutherland Springs were in a new facility this year (see related story), Pomeroy noted it’s the same Holy Spirit who will continue to heal hearts.

“It lets us see … we can hold to the hem of His garment and still move forward,” he said.

“The tragedy that inflicted so much heartache can still be healed if we hold on to the Lord and look at our situation through the laughter of these children.”

View all posts by Joy Allmond