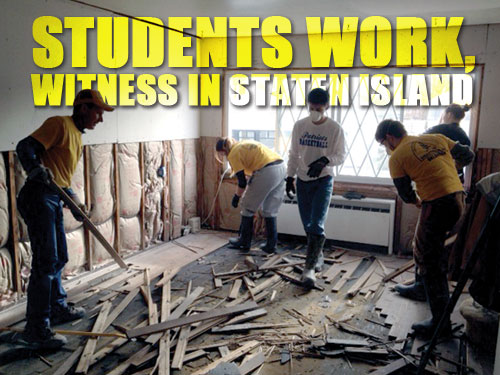 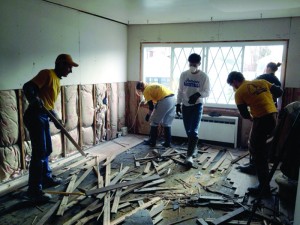 Editor’s Note: More than 500 Southern Baptist students from 22 states spent part of their Christmas break ministering to Hurricane Sandy survivors on Staten Island, N.Y. Following is a report on the trip taken by students from  Bethany, Council Road.

Our group of 16 consisted of 12 college students and four ‘seasoned’ adults. We were scheduled to leave early Christmas morning, but the weather delayed us until Dec 27. We stayed the night in Nashville and made it to Staten Island late on Dec. 28.

We began cleaning up in the lower Staten Island area the following morning, amazed by the flood victims’ resilience. Most of them lived in the basements that had been completely underwater. They had absolutely nothing left. We heard stories of survival and heroism, along with stories of death and destruction.

They wanted to talk, and we listened. Grant Rhodes was our “Blue Cap,” who led the team, and Sam Hedrick was the damage assessor.

People loved to open up and tell their own ‘survival story.’ As we would helped one household, it was common for other neighbors to come out and ask for help as well. They were all so appreciative and didn’t quite understand why we would travel 1,500 miles from Oklahoma to help them.

This led to many opportunities to share the Gospel. When we finished each house, we all signed a Bible, thanked them for allowing us to serve them and prayed with the family.  This was such a special time.

After two days in Staten Island, we were reassigned to Freeport, N.Y. In this area, our college students were split into three different groups— two mud-out teams and a chainsaw team. They all bonded well with one another and were moved by the victim’s stories and their generosity.

They also were a part of helping lead Jeroen, an exchange student from the Netherlands, to the Lord. Many faces will always remain etched on our hearts, like Dorothy. She was an atheist, but was so open to asking questions and listening to our reply. Sam was able to fix her front door that hadn’t worked in more than 30 years! She was so very kind, but lost. Our prayer is that her “heart door” also will be opened soon.

And then there was Ken, who was living in filth. Literally. His mattress was molded, and his closet was full of beer bottles and dirty magazines. He opened up his heart to Jesus that night. The next day, he told us his mom had just passed away, but he was at peace. The Lord’s timing is always perfect.

The college students did an amazing job! They worked hard physically and spiritually, without complaining. It was difficult coming home for them because they knew there is still so much work to be done. But it was a great start, and may the seeds that were planted sprout and bloom a thousand times over!