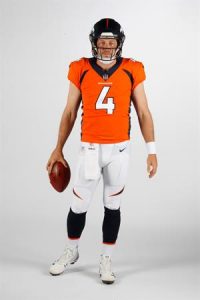 Case Keenum is now quarterback for the Denver Broncos, but his fame rose last season playing for the Minnesota Vikings when he threw the pass that became known as the ‘Minneapolis Miracle’
[Photo: Fellowship of Christian Athletes]

KANSAS CITY, Mo.—NFL star Case Keenum was in the middle of likely the most glamourous setting of his life. His best friend and wife, Kimberly, stood by him in a red dress as flashes popped. And he was prepping to take the stage for the 2018 ESPYs with fellow Minnesota Viking Stefon Diggs to accept an award for “Best Moment.”

While most would likely attribute the “Minneapolis Miracle” (final play against the New Orleans Saints that advanced the Vikings in the NFL playoffs) to bolstering Keenum to NFL fame, he and his wife knew exactly who led them there—God.

With his new book “Playing for More,” released Sept. 4, Keenum talked about how his NFL career is in God’s hands.

“This is God’s story and we’re trying to show a little piece of what He’s done in our lives,” Keenum said. “You can’t deny that God’s got His fingerprints all over it.”

It’s a story that goes all the way back to a West Texas community and a local Fellowship of Christian Athletes (FCA) office. Keenum’s father, Steve, a former football coach and the current FCA director in Abeline, Texas, instilled in him early on the importance of God, hard work and faith. 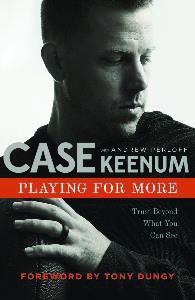 “My dad got saved at an FCA event early in high school so he always encouraged me to go to the FCA huddle and FCA camps in summer,” Case Keenum said. “We were the kids running around at camp, he even had us licking envelopes at times… we were his little helpers.”

His dad wasn’t only his coach and FCA leader, but also his hero. That helped Keenum uncover a talent and passion for sports, and it put him around other athletes who would also make a great impact on his life.

“Seeing these cool guys running and throwing the football around, I wanted to be just like them,” Keenum recalled. “I threw a football like them, I talked like them. I could tell something was different about the Christian athletes. I sought that out and I found out it was Jesus in their lives.”

Thanks to their influence, Keenum gave his life to Christ. His junior year, he noticed a girl who attended a different high school from him who also served as an FCA leader. Case and Kimberly started dating and eventually wound up at the University of Houston together, marrying in 2011.

Keenum said his faith became real in college. He was used to success in high school, but then things got harder.

“I wasn’t a fun person to be around,” he said. “I made football everything. I wanted to put so much into it and be competitive. I wasn’t healthy as a person—emotionally, physically and spiritually. I felt like if I wasn’t as good of a football player, I wasn’t good all around.”

Thankfully, FCA chaplain Mikado Hinson, who now serves at Texas A&M, was there for Keenum and began to disciple him. Throughout college, Hinson poured into Keenum. He supported him as an injury threatened his future in football. He continued to support him as he recovered and went on to play professionally. Playing for six teams in seven years meant few things stayed the same for Keenum, but his relationship with Jesus, the love of his wife and the support from his family was constant.

“Mikado helped me be a better believer and have a stronger faith,” Keenum said. “It’s a lesson I continually learn when my flesh tries to fall back on old thoughts and feelings I have, but I’ve learned when things are going well, (or)things going bad, keep my eyes on Jesus.”

As Keenum has become more widely known, he’s made sure that his relationship with Jesus is part of his story. And, he’s found he’s not alone.

“There’s a lot of solid guys in the NFL,” Keenum said. “It’s cool to see guys at the highest level of the sport unashamed with their faith first of all, but also unwavering in their faith. These guys don’t only talk about their faith, they live it out with their families, on their teams and as men of God. And, they’re sharing their experiences and helping younger guys like me try to do the same thing. I’m definitely encouraged.”

Thanks to the discipleship and encouragement Keenum’s received from coaches his entire life, from middle school to the NFL, he’s committed to passing it on and making disciples of Jesus, too.

“We’re all called to be disciples. That’s what Matthew 28 says,” Keenum pointed out. “The verse means whatever you’re doing, make disciples. And that’s not just for pastors, deacons and elders—that’s for all of us—everybody. So whether you’re a football player, a businessman, a teacher, make disciples. It’s what those guys are doing with me; they’re getting filled up; they’re filling me up, and now I’m trying to pass it on.”
Keenum is preparing to pass it on as he readies himself to play on a new team. He recently signed a two-year contract with the Denver Broncos, but he’s also passing on encouragement through Christian sports. His story continues to be shared in “Playing for More,” which tells how God has been faithful through good times and bad.

“People may only see my good times, but it’s through the tough times that I grew the most—it’s when God had me on the path He wanted for me,” Keenum said. “I hope to encourage people that they may have been told they can’t do something, or they’re not good enough, but God’s equipped you. He’s put you just where you need to be when you’re following Him. If you do all you can, and be the best with what He’s given you, He will be faithful.”