Stewardship a blessing in Sayre 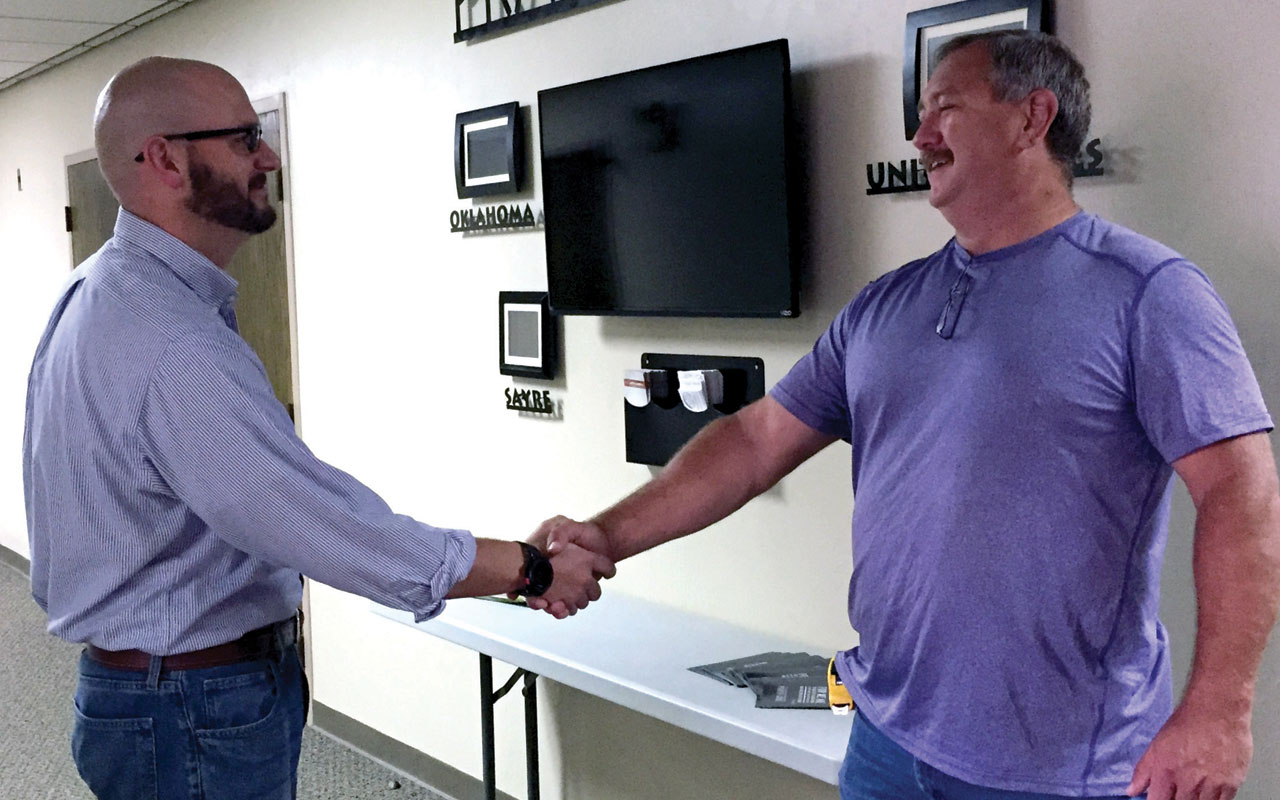 SAYRE—He expected some members to gripe, but instead, they thanked him.

Rusty McMullen, pastor of Sayre, First, decided to do a stewardship campaign recently. He said he was nervous with how finances were dropping and wondering how bills were going to be paid. He started to consider preaching on stewardship out of a “panic mode,” but his perspective changed.

People in Sayre have experienced the downturn in the oil and gas industry, as much of Western Oklahoma and parts of the state have experienced. Going through this financial crunch, McMullen believed it was important for his church to remain faithful in giving and demonstrate faith in God.

The stewardship campaign was titled “Generosity,” and over a four-week period McMullen spent time preaching and teaching on stewardship, leading up to a Sunday when they concluded with a “Prove the Tithe” Sunday.

“And then, we are stewards with an undivided heart. We are people who see our God being first and foremost in our lives. We don’t worship both God and money. I am not dependent on finances. Finances and money are not my god. My God is sovereign and supreme. He’s the only God, and He’s the only one who can provide for every need that I have. So my calling is to have an undivided heart towards Him, so that means if I have an undivided heart towards Him then it doesn’t matter what my finances look like or what’s happening in the economy around me. I’m still called to be the same generous person.”

McMullen took on the task to share with his congregation they were going to spend four weeks talking about money, and he realized that some church members may be hesitant to be a part of a sermon series of this nature.

“I recognize that some of you have a doubt in your mind or in your heart about a pastor who stands in the pulpit to preach (on stewardship) because of the old saying ‘He’s just here to get money’,” McMullen said when remembering how he began the sermon series. “I just addressed that up front and shared with our people, and they received it graciously, and in fact, over the course of those four weeks, I had people come up to me and telling me that they have never thought of money that way before.”

A single lady who is a new believer also spoke with McMullen about tithing. “I didn’t believe God would have me give up 10 percent,” she told her pastor. “That was a lot of money. My eyes were opened this morning. I recognize that my amount of money might not be very much, but my money joined with these people’s money becomes a whole lot for the Kingdom of God, and it can be used in a greater way than just me holding on to it.”

McMullen also addressed how many believe tithing was just an Old Testament practice and does not apply to today.

“I’ll make the argument with you,” he said, referring to those who believe tithing is no longer applicable. “Although (the New Testament) doesn’t indicate the ‘10 percent’ number, it’s even exceedingly more than 10 percent. Because of what Christ did for us on the cross and in the picture of what we become through the power of the person of Jesus Christ and in the Holy Spirit, it takes effect upon our lives, so we are to give way more than 10 percent.”

He also shared how tithing is different from an offering, how a tithe is that initial 10 percent and an offering is “an outpouring of worship to the Lord.”

“I challenged my people to look at it this way,” said McMullen. “It’s not how much money of mine I want to give back to God. It’s how much of God’s money I want to keep for myself. So whenever I look in my checkbook, do I want to give 10 percent of my money back to God or do I look at my checkbook and say all of this belongs to God? So God, you tell me how much you want me to give today, and I’ll be faithful to write that check or to put that cash in the plate or to sign online and to give that amount of money.”

As a result of the “Generosity” campaign, 137 people committed to become tithers. With this many making such a commitment, McMullen decided to offer Dave Ramsey’s Financial Peace University program for his church members to help them remain committed.

“We recognized that people needed to be educated more now than ever on how to handle their finances and to be wise with it,” he said. “Lindsay and I have been through Financial Peace, and we realized it can help us and has helped us financially. So we believed it would be important to help our membership to understand how to steward their money wisely and to get out of debt and how being out of debt helps free up their finances.”

After the first nine-week course of the financial training, 11 families paid off $64,600 in debt and saved $14,800 over the nine-week period. Sayre, First just started another Financial Peace course with 36 people attending with five who are not church members.

“I know that stewardship is something that’s difficult for pastors to talk about and difficult for congregants to hear,” McMullen said. “That doesn’t mean we shouldn’t deal with difficult things.”

Sayre, First is an example of how a church body can embrace tithing and be used of God by giving to His Kingdom.

For information on having a stewardship campaign, contact Bob Shelton in the Baptist General Convention of Oklahoma Cooperative Program office at 405/942-3000 x. 4561.