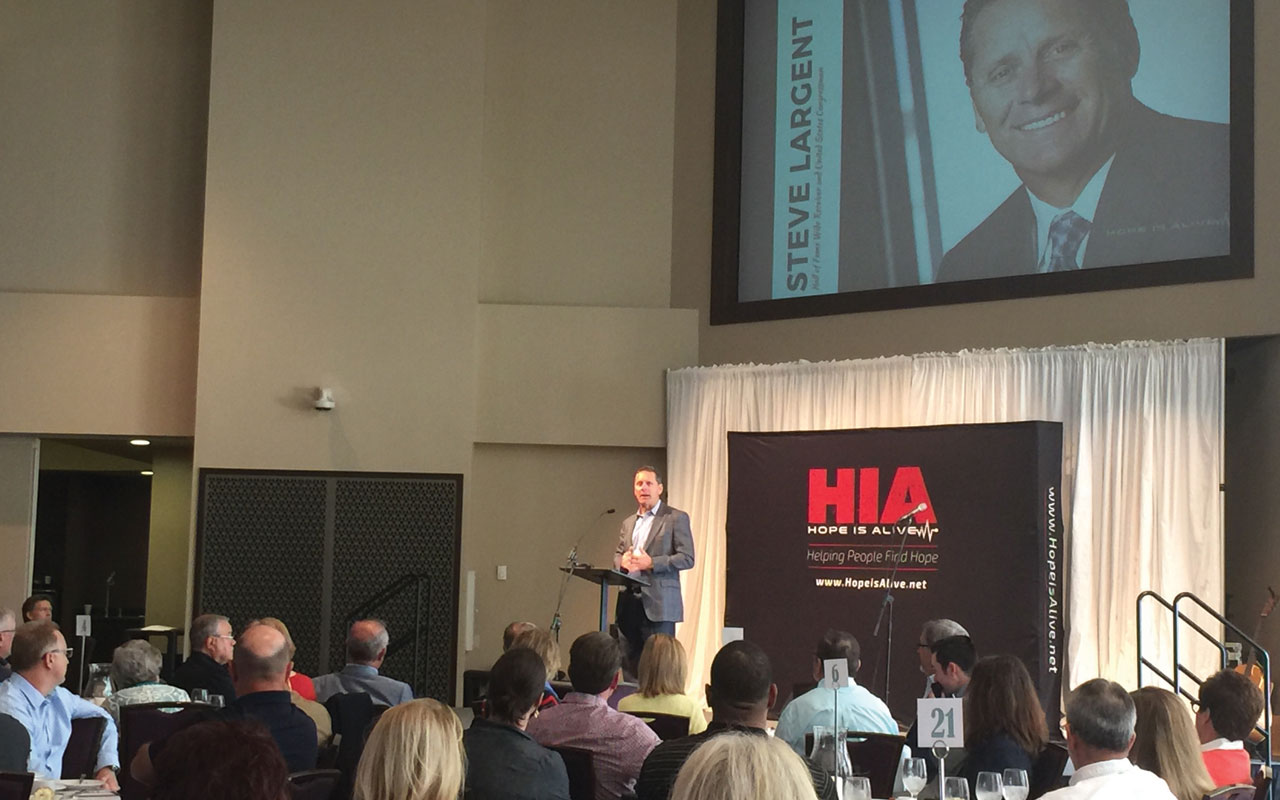 Hope Is Alive (HIA) ministries continues to grow in exposure and impact. Lance Lang, HIA executive director, has seen many lives affected by abuse change through their experiences of HIA.

One person in particular is Jeff Largent, who Lang said was one of HIA’s first residents.

“Jeff moved to one of our homes in March 2013,” said Lang. “He was our second graduate and has done an excellent job. He has turned his life around and works at Boeing. He actually finished college while he was in our program.”

Lang said he and Largent had many talks about “Uncle Steve” who is known among many football enthusiast as the NFL Hall of Fame wide receiver for the Seattle Seahawks. Through Jeff, Lang was able to talk to Steve about being involved with HIA.

“When we called him he said, ‘I will definitely consider it, but I’m not going to say yes until I come and tour your houses and meet with your leadership’,” said Lang about the process of connecting with Largent, a former University of Tulsa All-American. “I really appreciated he said that and welcomed it because I wanted him to believe in what we were doing.”

Largent toured HIA facilities, spoke with several residents, and Lang said he asked tough questions. After the visit was over, Largent asked Lang, “OK, what’s the date?” He was willing to be a speaker for an HIA “Inspiring Luncheon.”

“It was an incredible day for us,” said Lang. “We reached our financial goal which was a huge thing for us. The main thing for us was several hundred people were made aware of what we do so we can help change the lives of people they know that are affected by addiction.”

Largent spoke how he got involved because of his nephew Jeff and how HIA is making an impact.

“I was convinced they were doing a really great job. My life also has been affected by alcoholism,” said Largent who shared his stepfather was an alcoholic. “I saw the abuse, verbal abuse, physical abuse, that took place in my own home, so I am very aware of that, and I’m also aware of the impact (abuse) has on someone’s life, even my own.”

“I think his endorsement brings us credibility,” Lang said. “I think it shows people that we’re the real deal, and he believes in what we’re doing. Steve is well known as a man of faith, and we are a faith-based program. We don’t want to be a part of just talking the talk but also walking the walk. His endorsement also shows that addiction doesn’t discriminate against anybody. It affects many of us.”

Lang knows having well-known personalities helps connect people with HIA, which is approaching four years as the ministry began in November 2012.

“We bring in well-known people so we can draw people who might not come to an event of ours and that we might also impact their lives,” said Lang. “Some people come and think they are going to hear an inspirational program. Many times they walk away, though, thinking someone in their life needs help. Sometimes it’s themselves. We’ve had tons of stories of families that have already called and said ‘Hey, what happened in Steve’s family is happening in ours right now. What should we do?’ And we try to help them. We can’t help people unless we know who they are. People like Steve and Darryl and Sean help introduce people to Hope Is Alive.”

Lang said HIA is looking to expand and provide homes to help people with addictions in other parts of Oklahoma.

Plans are being made to have another HIA Inspiring Luncheon in the Tulsa area before the end of the year or in early 2017.