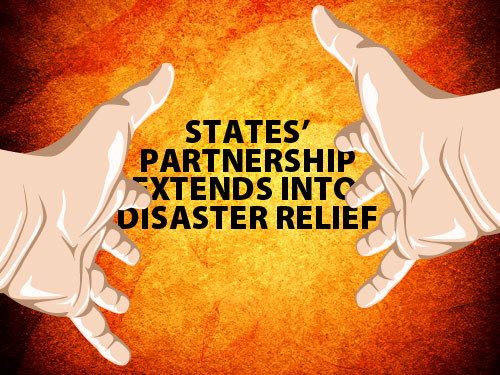 COLORADO SPRINGS, Colo.—Bill Winter, acting state disaster relief director for the Colorado Baptist General Convention, responded immediately when asked how valuable Oklahoma Baptists’ partnership with his state convention was proving to be as his team of disaster relief volunteers began to ramp up their ministry to those affected by wildfires raging across the Centennial State.

“We could not have done it without them, plain and simple,” Winter asserted. “We have the capability of some small stuff; we have done it in the past, but not this big. For example, we had a request for a laundry trailer. Well, we don’t have one in Colorado. Oklahoma stepped up and brought their unit out here.

“People were so thankful in the Ft. Collins area. The evacuees ran up with what they could grab out of their closets, and some of them had been living in those clothes for a week. They were just so thankful and so grateful for our Oklahoma partners who were there doing laundry.

“We didn’t have that capability here in Colorado.

“(As far as) setting up a kitchen, yes we can do that, but we can’t man it on a long term basis. We can run it for a short term. But we’re going to need Oklahoma people to come in and help.

“So, in short, again, we couldn’t have done this without our brothers from Oklahoma.”

Winter, who also is pastor of care and crisis ministries at Denver, Riverside, knows the effort to help Colorado residents recover from the ravages of the blazes will be a long one.

“I would probably guess we’ll be at this for a year,” he sighed. “Once the emergency is over and done, the kitchen will shut down, and we’ll start to gear up for the ash-out phase, which will be a mammoth job. We’re going to need teams from all of our neighboring states to come in and work helping us with the clean-up phase of it, and I’m guessing, based on our experience with the Boulder fire a couple of years ago—that Four Mile Canyon fire—we will work until the snow falls in the mountains and close up shop. I’m expecting we’ll have to do the same thing this year and have to come back in the spring and do more sites next year.”

As he spoke, Winter glanced at Oklahoma disaster relief director Sam Porter, and then spoke of how valuable Porter’s 14 years of experience had meant as the Colorado DR team had organized their response.

“In my case as acting state director—I’ve never done this before—I’m overwhelmed. I was just supposed to be the guy who handled phone calls for two weeks. That was what I committed to, but suddenly this started happening and those phone calls started coming hot and heavy.

“I was running down pretty fast. After the first week of doing that, I was released from my pastoral responsibilities by my church for two weeks to devote all of my energies to this.

“This started out with one small fire and has grown into this. They finally asked us to set up a kitchen and that’s when everything exploded. Sam’s help has been invaluable.”

Colorado volunteer Ruby Rieves, a member at Denver, Riverside, came to Colorado Springs after working a week in Loveland helping with the Oklahoma laundry trailer set up at the Laramie County Fairgrounds.

“Many of those people staying in the shelter only had one change of clothes,” she marveled. “They would bring their clothes to us every day because they had no option.”

“A lady forest ranger came by—the service was for the volunteers as well as those in the shelter—and she had heard about the service. She said, ‘I have had these clothes on for three days and if I find another set of clothes, can you wash them?’ We said, of course.”

Asked if the laundry meant a lot to the evacuees, Rieves smiled, “Cleanliness is next to godliness. If you have been in the same clothes for three days, you feel dirty all over. It was really a blessing to those people. They were very appreciative, and they opened up with their stories, too.

“I talked to a gentleman who said the first lightning that struck was behind his house. I didn’t have the heart to ask about his house, but he said he stood out on his deck and he watched the first fires start.”

As always, meeting the physical needs of people after a disaster opens the door to share the Gospel.

“I told people we do all of this because we love Jesus, and Jesus loves you,” Rieves beamed. “That’s what it’s all about!”

Rieves emerged from her experience as a fan of Oklahoma Baptists.

“You had a great team there from Oklahoma because we went there to be trained. I had never been trained on how to work the laundry trailer. Frank (Mitchell of Chandler, First) and Marian and Carol were there and they were very gracious. They were a fantastic team.”