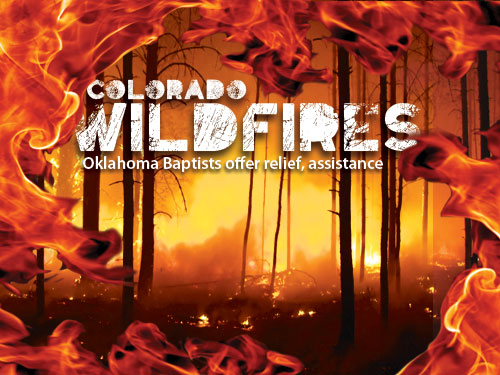 COLORADO SPRINGS—During an on, off, on again operation that finally kicked into high gear July 1, Colorado Southern Baptist disaster relief volunteers launched an extended ministry of aid to victims of the worst spate of wildfires in the Centennial State’s history.

And, walking alongside them were experienced DR leaders and trainers from the Baptist General Convention of Oklahoma, including Sam Porter, BGCO disaster relief director and Dan Fuller, Southwest Zone Blue Cap from Medicine Park, who drove in from St. Louis, Mo.

Bill Winter, Baptist General Convention of Colorado (BGCC) interim DR director, called Porter on June 29 with a plea for assistance as the call for a response came from Salvation Army officials.

Porter traveled to Colorado Springs via Denver the next day and spent the next three days helping to organize the response and calling in Oklahoma DR leaders and equipment to help out.

Actually, an Oklahoma laundry trailer was already in Colorado and had provided those services to victims of the High Park fire, which began on June 9 about 15 miles west of Fort Collins north of Denver. Oklahoma volunteers from Chandler, First washed 253 loads of laundry from June 17-28, and trained 83 Colorado volunteers on how to operate the unit.

Also, Wes and Jean Johnson from Chandler, First already had a shower trailer in Colorado with his church’s team on a mission trip.

Both of those units were moved to Vanguard Church in Colorado Springs, where the disaster relief headquarters were being set up.

As the response mounted, Colorado was in the midst of its worst wildfire breakout in at least a decade, officials reported. With 10 wildfires burning, including the High Park blaze, which scorched more than 118 square miles and destroyed 257 homes near Fort Collins. A total of 4,300 homeowners were evacuated from the area as some 1,900 fire fighting personnel battled the blaze.

That fire was the most destructive in the state’s history before the Waldo Canyon fire broke out June 23 in the Pike National Forest to the west of Colorado Springs that lies at the base of Pikes Peak mountaintop.

As of July 2, the Waldo Canyon fire had destroyed 346 homes as 1,523 firefighters battled the blaze, which had burned across 17,920 acres, making it the most destructive fire in the state’s history. More than 35,000 of the area’s 650,000 citizens had been evacuated from their homes as the fire was fanned by gusting winds and fueled by “literal mountains of forests of standing dead dry trees,” created by record high temperatures, drought and pine beetle kills, said BGCC executive director Mark Ecklund.

“This is the ‘perfect storm’ in Colorado. We appreciate the prayers of Southern Baptists as we have the opportunity to be ‘Jesus’ to many people in crisis.”

Only three miles from the Colorado Springs city limits, the fires are also threatening the nearby campus of the U.S. Air Force Academy.

Between the Air Force Academy and the city, at least seven helicopters used to haul fire-dousing chemicals or water were seen either in action or on the ground.

Some good news was reported July 2 as authorities in the Colorado Springs area announced that the Waldo Canyon Fire was 70 percent contained. That estimate was updated to 90 percent after light rains fell in the area on July 4, and officials hoped for full containment by July 6. Some evacuations were lifted July 1, and residents were allowed to return to their homes. A few more were allowed to return late July 2.

The Colorado Feeding Unit at Vanguard Church was asked by the American Red Cross at 12:15 p.m. on July 1 to provide 500 meals for area residents allowed back in to search their home sites.

The volunteers sprang into action and by 1:45 had made 500 roast beef, ham and cheese sandwiches. They also provided 600 hot meals that evening for area residents.

In addition to 1,400 meals prepared the evening of June 30 for firefighters and officials at the Emergency Operations Center at Fire Station No. 9, the feeding unit prepared 500 meals for area residents and another 500 meals for transport to Rocky Mountain Christian Center in Green Mountain Falls, Colo., about 20 miles northwest of Colorado Springs, for breakfast, lunch and dinner July 2-3—a total of 3,000 meals each day.

While the initial Waldo Canyon fire response was drawing to a close as Independence Day approached, Porter and Colorado DR officials began to also focus on ash-out (clean-up) operations in Fort Collins.

“By July 9 Oklahoma will have five assessors, one ash-out team and one chain saw team activated in Fort Collins,” Porter said.

“I believe the Lord has raised up a literal army of believers across the U.S.A. named Southern Baptist Disaster Relief to be able to respond as a Christian humanitarian group to bear witness to people in need who normally would not respond to the gospel message,” Porter said.

“However, when our volunteers come to their rescue and assist without any charge, disaster victims are open to hear why we do such a thing. Thus, the volunteers share their testimony/story.

“Pray for all of those assisting and volunteering to meet the needs of the fire victims who number into the thousands.”

In addition to the Colorado response, Oklahoma ash-out teams are responding to the Little Bear fire near Ruidoso, N. M. during every week July.

They were hauling the Union Association Mud-Out Trailer and one BGCO Bobcat with them.