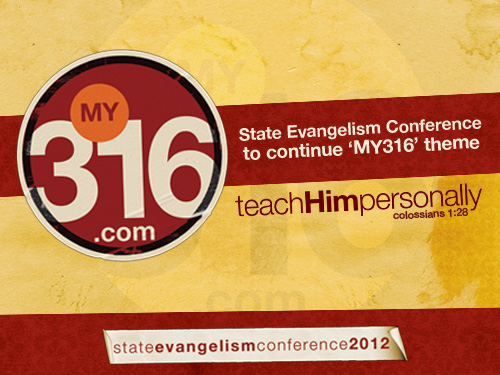 Oklahoma City, Southern Hills will be the site of the 2012 State Evangelism Conference Jan. 30-31.

Continuing the “MY316” theme of the past two years, this year’s theme is “Teach Him Personally,” with the major emphasis on evangelism in the disciplemaking process. Key verse is Colossians 1:28, “Whom we preach, warning every man, and teaching every man in all wisdom; that we may present every man perfect in Jesus Christ.”

Music will be under the direction of Randy Lind, associate pastor of music and worship at Oklahoma City, Southern Hills. Featured musician will be Babbie Mason, award-winning recording artist, and a featured guest at Women of Faith Conferences across the nation.

Luter, who is serving as first vice president of the Southern Baptist Convention, has led Franklin Avenue from a membership of 65 to its current membership of 7,000-plus worshippers.

Pitman has been preaching for 47 years. A graduate of Samford University and Mid-America Seminary,  he currently serves as dean of the Adrian Rogers Center for Biblical Preaching at Mid-America.

Smith, who teaches Christian preaching, is the author of Doctrine that Dances: Bringing Doctrinal Preaching and Teaching to Life; coeditor (with Timothy George) of A Mighty Long Journey; and coeditor with George and James Earl Massey of Our Sufficiency is of God: Essays on Preaching in Honor of Gardner C. Taylor.

Collins, who earned a Ph.D. at New Orleans Seminary, and who has more than 20 years pastoral experience, has preached at numerous Baptist state conventions and pastors’ conferences.

Zinn, who grew up at Immanuel church and served as its youth pastor, has been senior pastor of the church since 1977. He has seen membership increase from 730 to 8,100-plus, and helped lead the church to move to a 40-acre property site, and build a 2,000-seat worship center and three education buildings, plus an administration and education combination building including a chapel and bookstore with many ministries to serve the people of the community.

Falls is a U. S. Army veteran, a local pastor, a seminary educator and a national leader among Native Americans. In addition to teaching at Golden Gate Seminary in Mill Valley, Calif., he launched Golden Gate’s Rocky Mountain Campus in Denver, Colo. in 1996.

Freeman has been a youth evangelist, a youth minister, an associate pastor and began his ministry as senior pastor at Newcastle in 2009.

Hall has served as pastor of churches in Louisiana and Oklahoma. He has been at Lawton, First since October 2009.

Melton, who has been pastor of Southern Hills since January of 2000, served for 14 years at Oklahoma Baptist University. He currently serves as president of the Baptist General Convention of Oklahoma.