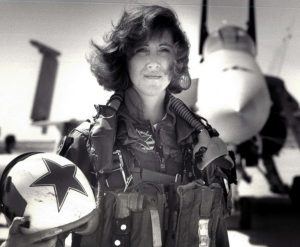 BOERNE, Texas (BP) — When members of First Baptist Church in Boerne, Texas, heard recordings of radio transmissions from a Southwest Airlines pilot who made a harrowing emergency landing this week in Philadelphia, they recognized the voice as one of their own.

Tammie Jo Shults — the pilot who guided Flight 1380 to the ground April 17 after a midflight engine failure shot debris through a window, killing one passenger — is a recognizable figure at the Texas Hill Country church, which averages 900 in worship. She has led the children’s worship program at First Baptist and taught Sunday School for children, middle schoolers, high schoolers and adults, said Staci Thompson, a longtime friend and administrative assistant in the church office.

“When we heard the voice” in media replays of cockpit recordings, “it was just like talking on the phone. That’s what she sounds like,” Thompson told Baptist Press.

The church was “impressed” but not “shocked,” Thompson said, at reports Shults, 56, landed the plane safely after a 20,000-foot drop in six minutes, then walked down the aisle hugging passengers. The plane was bound from New York to Dallas, and seven of the 144 passengers aboard were injured in addition to the one fatality.

Social media reports by surviving passengers hailed Shults as having “nerves of steel” and being “a true American hero.” One passenger told The Dallas Morning News, “I specifically said to her, ‘Do I get a hug too?’ She said, ‘Of course, I wouldn’t let you by without a hug.'”

Shults’ “biggest goal” amid the emergency landing and subsequent media coverage, Thompson said, “is that she can share her faith and it resonate and awaken people’s eyes to how great a God we have.”

Mike Mantooth, executive pastor of ministries and missions at First Baptist, told BP via email, “I’m always amazed at the caliber of people at FBC Boerne. Tammie Jo is an example of one of them. Through her commitment to excellence in aviation, she has gained a national platform to give witness to her faith in Christ. We are proud of her as her church family. She is being hailed as a national hero, and we are celebrating what God has done through her and at the same time praying for her as she grieves the loss of a passenger.”

Shults and Flight 1380 first officer Darren Ellisor are not granting media interviews but released a statement saying they were “simply doing our jobs.”

“Our hearts are heavy,” they stated April 18 according to USA Today. “On behalf of the entire crew, we appreciate the outpouring of support from the public and our coworkers as we all reflect on one family’s profound loss. We joined our company today in focused work and interviews with investigators. We are not conducting media interviews.”

Thompson said Shults long has evidenced a heart for evangelism and ministries of compassion. She has provided housing for hurricane victims and widows, helps care for her disabled younger sister and her husband’s elderly mother, and shares her faith in Christ with co-captains on Southwest flights.

“I hear stories about hard times that different co-captains have been going through,” Thompson said, “and how she just gets to pray over them and give them Scripture and give them love.”

Multiple media reports have cited a blog post in which Shults stated being a pilot gave her “the opportunity to witness for Christ on almost every flight.”

In a feature article on Shults, The Dallas Morning News seemed almost bewildered by her Christian testimony.

“It seems that nearly everyone in Boerne has a Tammie Jo story,” the newspaper stated, “and taken together, they paint a picture of a woman almost too impossibly caring, too impossibly devoted to her community.”

This week’s emergency landing is not the first time Shults has made news. Three decades ago, she became one of the first female fighter pilots in the U.S. military, piloting F/A-18 Hornet fighter jets in the Navy, The New York Times reported.

Yet even amid success in a male-dominated profession, Thompson said, Shults has remained committed to living out biblical gender roles in the home and church and to teaching fellow female pilots how to model biblical femininity.

“She even created a business that does girl pilot stuff to empower other women to be able to be feminine and be who they are in the workplace,” Thompson said.

First Baptist, which cooperates with the Baptist General Convention of Texas, affirms a confession of faith that largely parallels the Baptist Faith and Message, including Article XVIII on the family.

As media reports proliferate about Shults’ heroism, Thompson said, “she wants people to know that God was there with her” on Flight 1380, “that He helped her in getting control of that plane and landing that plane.

“It was because of Him, not her,” Thompson said. “She was just a teammate and a co-captain. He was the captain.”

Shults and her husband Dean, also a Southwest pilot, have two children, ages 18 and 20.