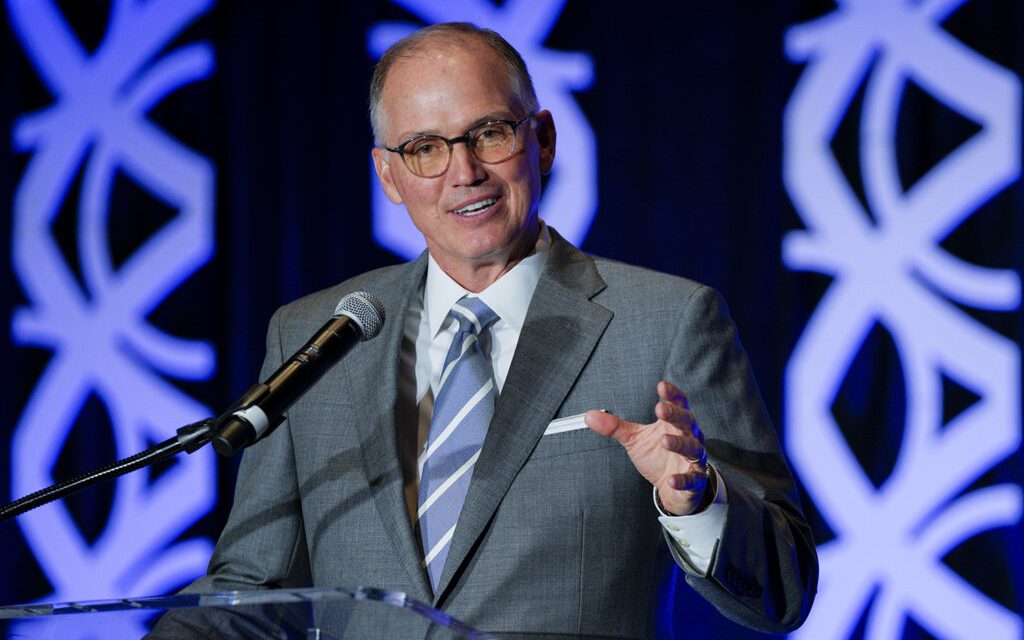 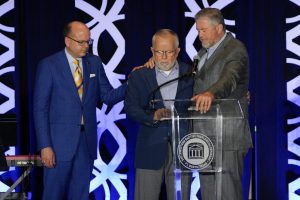 Litton, a former member of the board of trustees of Southwestern Seminary who earned a Master of Divinity degree in 1986, addressed the gathered alumni.

In his introduction of Litton, Greenway said, “Dr. Litton, we are excited for your service over this next year, and I want you to know that in any way and in every way Southwestern Seminary can serve you and serve our Southern Baptist family, as Jesus said, ‘You have not because you ask not.’”

Litton said he will “never forget the loving care I received from my professors like Roy Fish, Malcolm McDow, people who loved us through our difficulties and our trials.”

Steve Gaines, a two-time graduate of Southwestern Seminary and the most recent alumnus to serve as SBC president, led the group in praying for Litton. Gaines prayed for Litton what Gaines’ wife prays for him, that God would “wear him like a glove.”

In honoring D. Hance Dilbeck, Jr., Thomas J. Nettles, and Roy J. Fish, Greenway said, “One of the highest honors our seminary can bestow upon one of our own is to name that person a distinguished alumnus.”

Dilbeck, president-elect of GuideStone Financial Resources, earned Master of Divinity and Doctor of Ministry degrees from the seminary. Dilbeck, who has previously served the seminary as a former chairman of the board of trustees, also served as the executive director of Oklahoma Baptists and pastored churches for 27 years in Oklahoma. 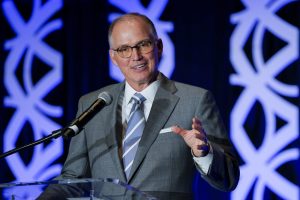 Greenway said Dilbeck is “not just somebody who has served so well as a pastor and denominational leader, but he is somebody who loves Southwestern Seminary.”

“It is a great privilege to be a minister of the Gospel,” Dilbeck said.

Dilbeck expressed gratitude for his wife of more than 30 years, Julie. Additionally, he expressed thanks for the theological education and relationships he received at Southwestern Seminary. “All these SBC relationships began on Seminary Hill,” Dilbeck said. “We are grateful and continue to pray for Southwestern.”

His leadership roles in Southern Baptist life have included Oklahoma Baptists president; second vice president of the SBC; and chairman of the board of trustees of the International Mission Board and Oklahoma Baptist University. He also has served as an adjunct professor of preaching at Southwestern and OBU.

The Dilbecks received Southwestern’s L.R. Scarborough Award in 2018 in recognition of their work in cultivating financial support for the seminary. The couple has three grown sons and eight grandchildren. 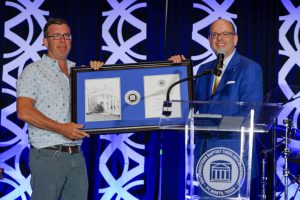 Joe Nettles, left, received the award on behalf of his father Tom, as he was caring for his wife Margaret who was ill.

Nettles co-authored “Baptists and the Bible” with L. Russ Bush in 1980, a 40th anniversary edition of which was released in 2020 by Seminary Hill Press. The book proved Baptists’ historical commitment to inerrancy of Scripture as Southern Baptists passionately debated the issue.

Though Bush was honored as a distinguished alum of the seminary before his passing in 2008, Nettles had not been awarded the distinction. However, Greenway said he “believed it was time for us to give thanks to the Lord and recognize this outstanding Southwesterner who provided the intellectual firepower and the scholarly attestation that gave the fuel for those who were committed to seeing our convention of churches being unequivocally committed to the authority and sufficiency of God’s written word.”

Nettles was unable to attend the ceremony due to the unexpected illness of his wife, Margaret. The Nettles’ son, Joe, accepted the award on his father’s behalf. Bill Ascol, one of Nettles’ first students at Southwestern Seminary, read remarks Nettles provided. Tom Ascol, Bill’s brother and also a Southwestern Seminary graduate, led the crowd in praying for Margaret.

Nettles expressed “earnest and eternal gratitude to the Triune God for determining that the most formative steps of my life remain within the context of Southwestern Baptist Theological Seminary.”

Additionally, Nettles gave thanks to Greenway for the “generous and unexpected honor.” Nettles said the honor reminded him of the same surprise he had when the seminary’s fifth president, Robert Naylor, asked the then 29-year-old Nettles to join the seminary faculty.

Nettles taught in Southwestern’s church history department from 1976 to 1982 after earning Master of Divinity and Doctor of Philosophy degrees from the seminary in 1971 and 1976, respectively. Nettles returned to Southwestern as a visiting professor of historical theology in December 2020, teaching a course on the doctrine of the Bible.

Nettles and his wife Margaret have three children and six grandchildren. 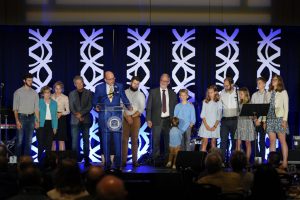 The family of Roy Fish received his award. Fish died in 2012.

Greenway said he “is part of a generation…where you can’t ever think of Southwestern Seminary and not think of Roy Fish.”

“If Roy Fish is not a distinguished Southwesterner, then no one is,” Greenway said.

As several generations of Fish’s family, including his wife of more than 50 years, Jean, made their way to the platform to receive his award, Greenway asked those in the audience who had Fish as a professor to stand. More than half of the 700 attendees stood.

In words directed to the Fish family, Greenway said of the former students standing, Fish’s legacy “lives on because of the investment he made. … His greatest joy and passion was teaching Southwestern Seminary students evangelism and we are forever in his debt.”

After a standing ovation of the audience, Fish’s son, Steve, tearfully gave remarks on behalf of his family. Of his father he said, “As great a man as my dad was in public, he was an even greater man in private.” The younger Fish recalled memories of traveling with his father learning to share his faith. Steve Fish also honored his mother and the role she had in her husband’s ministry.

As a surprise to the Fish family, Greenway announced his intention to recommend to the seminary’s board of trustees the Roy Fish Chair of Evangelism at Southwestern Seminary. Greenway remarked the chair would be “one of the greatest testimonies we can have to honor and to bless this family and the generations of Southwesterners to come if we had a fully funded chair of evangelism to carry on the torch of Roy Fish’s legacy.”

Fish, who died in 2012 at age 82, served as professor of evangelism at Southwestern nearly 50 years. A former occupant of the L.R. Scarborough Chair of Evangelism (“the Chair of Fire”), he imparted a passion for evangelism to thousands of students while his name became synonymous with evangelism as a popular speaker throughout the Southern Baptist Convention. The seminary honored Fish in 2005 by naming its evangelism and missions school for him. As a Southwestern student, Fish earned Bachelor of Divinity and Doctor of Theology degrees in 1957 and 1963, respectively. As a faculty member, he organized the annual Spring Break Revival Practicum (now called Reach This Nation) for many years, sending out hundreds of students to preach revivals in local churches across the country. 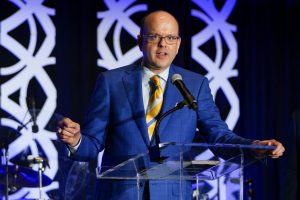 The luncheon concluded with updates from Greenway regarding the seminary. Noting the challenges COVID-19 had on the seminary, Greenway commended “the resiliency and the incredible work of all of our faculty and staff.”

Southwestern Seminary at its best has always been known for a great faculty, Greenway said. Noting the faculty had gone “above and beyond” during the pandemic, Greenway expressed thanks for the leadership of David Dockery, Southwestern Seminary’s interim provost and distinguished professor of theology.

Greenway also reported that applications for the upcoming fall semester are double what they were at the same time last year.

Reflecting on the strong attendance at the luncheon, Greenway said, “When you look around this room, dear friends, this is the big tent vision. This is the one Southwestern vision. … Southwestern Seminary at its best has always been the seminary able to bring Southern Baptists together around the things that matter most.”

Art Toalston contributed to this story.

Ashley Allen is director of news and information at Southwestern Seminary

View all posts by Ashley Allen