Southern Baptists ‘send our best’: 66 IMB missionaries go to the nations, 11 from Okla. 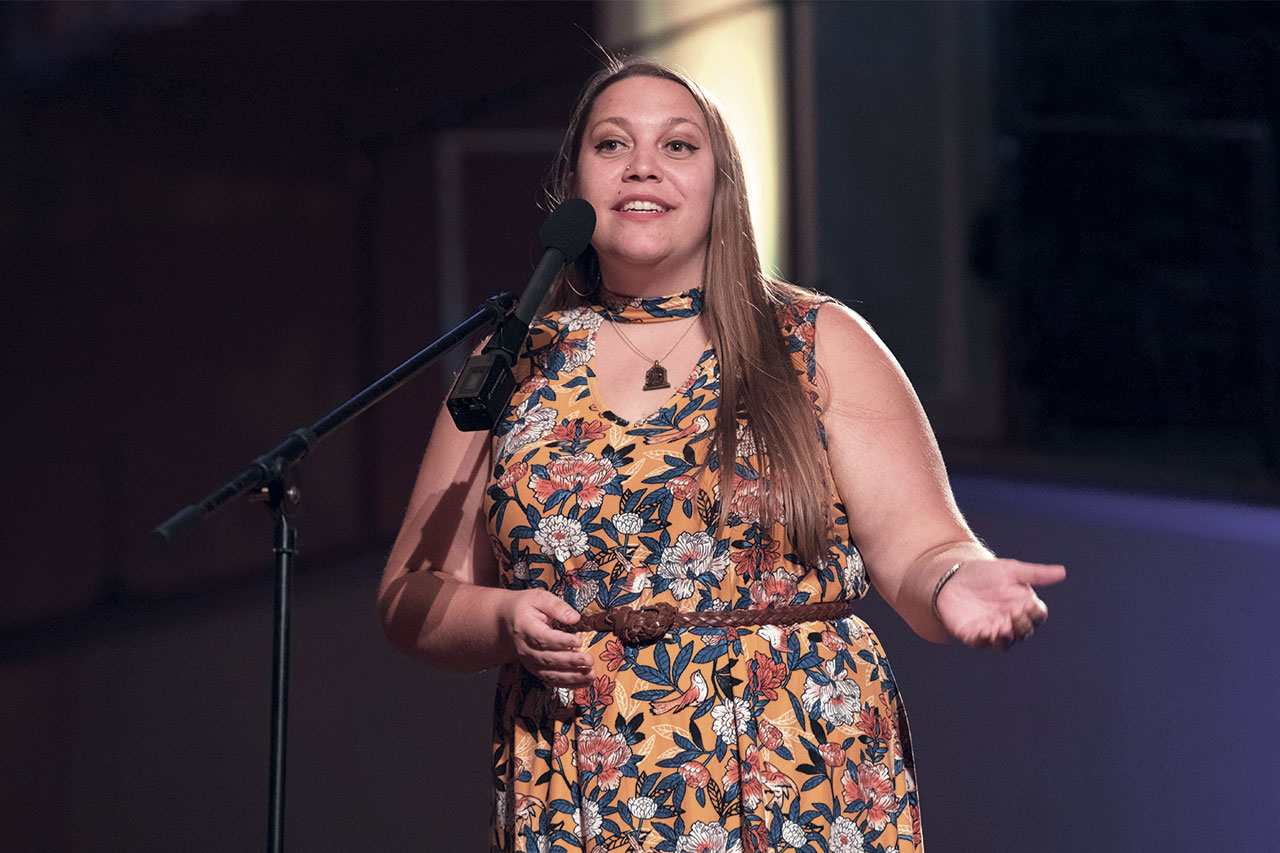 Caroline Reel shares how stories have always impacted her life. The new Southern Baptist missionary from Tishomingo is being sent to share the good news of Jesus Christ with Sub-Saharan African peoples. [Photo: IMB/Chris Carter]

RICHMOND, Va.—Southern Baptists celebrated the sending of 66 new International Mission Board (IMB) missionaries on Wed., Sept. 26, at Richmond, Va., Grove Avenue—with each new missionary sharing firsthand how God has woven throughout their lives a desire to take His Gospel to people who have never heard it.

Of the 66 new missionaries, 11 have ties to Oklahoma, either by upbringing or education. Many of the 11 are serving in closed security locations, and IMB has assigned these missionaries publicity names (identified with an asterick).

“Oklahoma was well represented in the IMB Sending service in Richmond,” said Hance Dilbeck, executive director-treasurer of the Baptist General Convention of Oklahoma. “Their testimonies indicate the way our ministries all work together for God’s purpose of reaching the nations for Christ. Faithful local churches, small and large, GA camp, Falls Creek, OBU, BCM, mission trips—all these go into the making of a missionary. We send more than our money to the International Mission Board; we send our sons and daughters; we send our best.”

Caroline Reel is one of the new IMB missionaries with Oklahoma connections. A member of Tishomingo, Bullard Chapel and a graduate of Oklahoma Baptist University, she will be serving among refugee people in Uganda.

“The Lord has always moved my life through stories,” Reel said. “From the missionaries’ stories at (Girls in Action) camps when I was a little girl, to storying through the Bible on mission as part of my education, stories have connected me to God’s plan to share His life-giving story with the nations.” 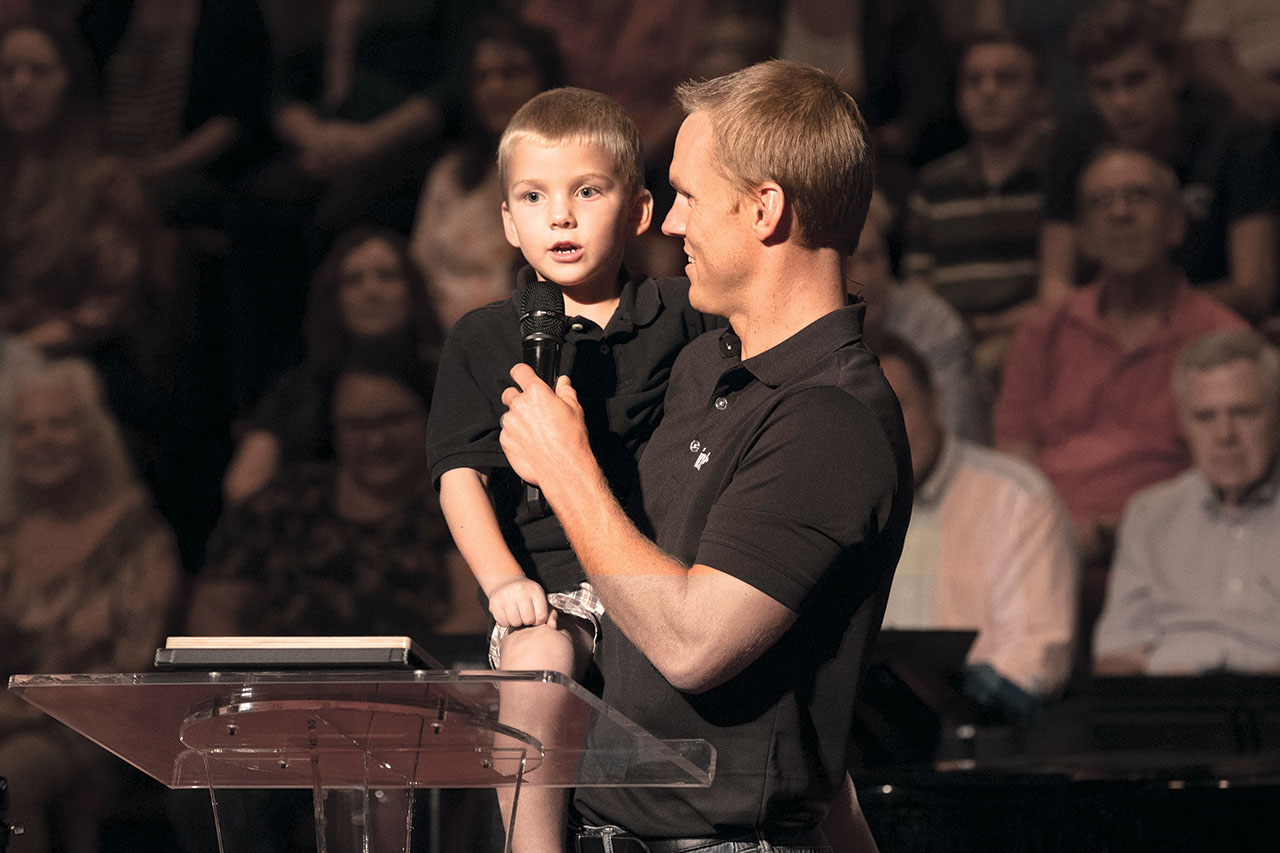 “We got to be with so many who were born in Oklahoma, raised in Oklahoma, educated in Oklahoma as they are going out,” Melton said. “I saw how the Lord has been on our state, and people are continuing to be called out of our state to go. It was a tremendous time. You leave there feeling so much as an individual Southern Baptist that you are a part of such a great overall story of God and how He is making Himself known among the nations.”

Years ago, as a young couple in Ecuador, Patrick and Victoria Regalado learned of the great need for Hispanic pastors in the United States. In 1988, they arrived in New York City to reach Latinos for Christ.

“The last 10 years we have traveled to the Americas and around the United States equipping church leaders,” Patrick said. Now the couple feels that God is leading them to Latin America to equip pastors and leaders. They are sent by Nashville, Tenn., Judson to the Americas.

God used the 2015 refugee crisis to move missions from “a good idea” to God’s priority in the lives of Stephen and Amy Morgan, who are sent by New Orleans, La., Lakeshore to European peoples.

“We aren’t special,” Amy said. “We feel God’s hand has been in our education and experiences directing us toward missional service.”

The path to missions service started eight years ago for Stephen and Kimberly Park, sent by Anaheim, Calif., Saddleback Valley Community with a simple prayer: “God use us to do whatever it takes to reach one more for Jesus.” The Parks will share God’s love in Spain.

od saved Jeff Johnson* close to the tragic events of Sept. 11, 2001, and gave him a passion to share the Gospel, with a special burden to share with Muslims. Growing up in a Roman Catholic home in Oaxaca, Mexico, the Lord used a missionary to share the gospel with Sophia Johnson*, and in 1998 on her first mission trip to Cuba, God called Sophia to take His gospel to the nations. The Johnsons are sent to the people of North Africa and the Middle East.

As a refugee in the Philippines, Ruby Ng* felt the love of many missionaries. She thanks God for making her one as Ruby and her husband, Peter*, plan to share the Gospel with the 400,000 Vietnamese living throughout Taiwan.

From the Scripture, Platt offered four exhortations to the new personnel as they go out into the world with the Good News of God’s love. Reading from Daniel 6, he gave the first exhortation: “May your only offense be obedience to God’s Word.” In the story of Daniel, other people were opposed to God’s law, but they knew that Daniel would be obedient to God’s law, no matter what it cost him.

“Real holiness is risking your life for the spread of God’s kingdom,” Platt said. “Offend people with obedience to God’s Word. Remove obstacles to the Gospel, but don’t remove the offense of the Gospel.”

Second, Platt exhorted: “May your deepest joy be found and your greatest work be done daily on your knees.” When told not to pray to anyone but the king, Daniel decides, “You can take my life, but you can’t take my time with the Lord,’” Platt explained. “Live like that! God, give us this kind of prayer!” 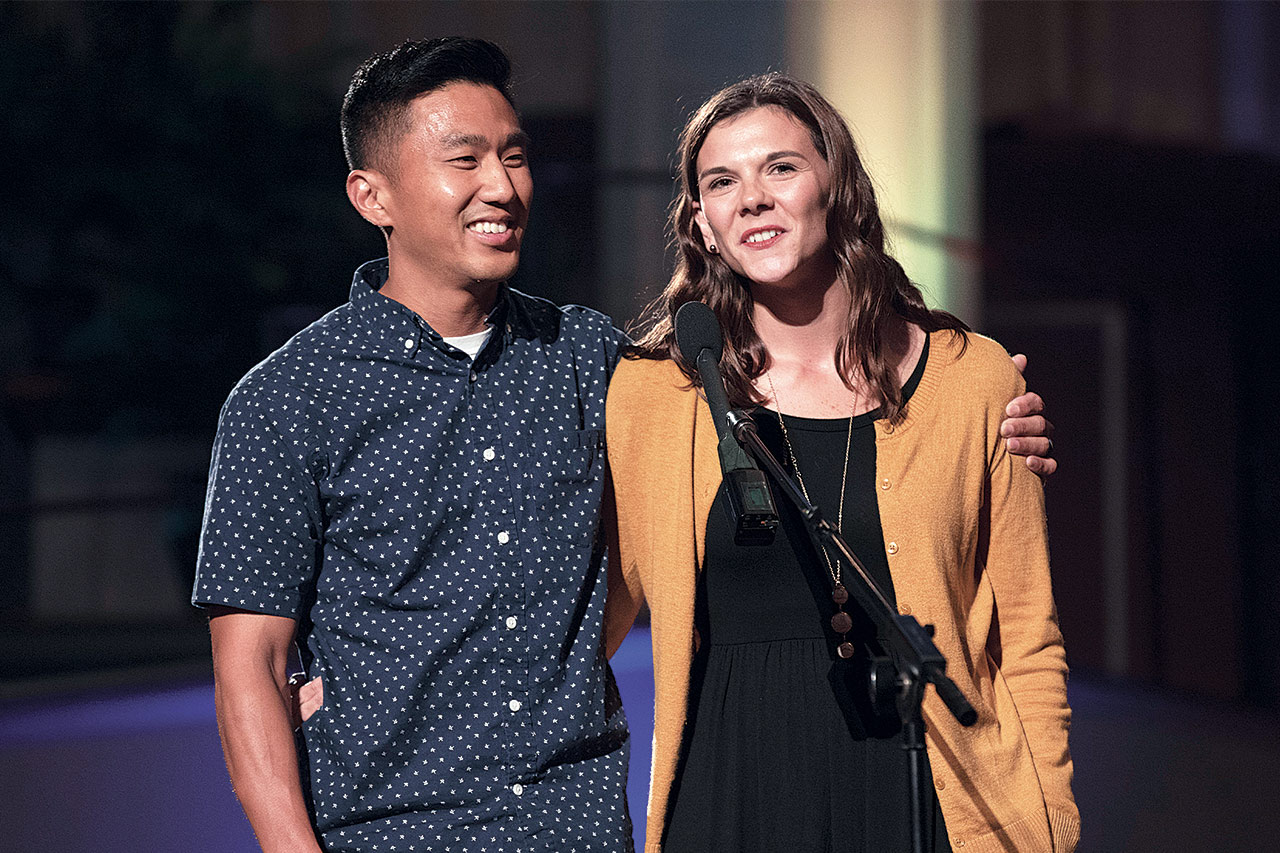 The path to missions service started eight years ago for Stephen and Kimberly Park, sent by Anaheim, Calif., Saddleback Valley, with a simple prayer: ‘God use us to do whatever it takes to reach one more for Jesus.’ The Parks will share God’s love in Spain. [Photo: IMB/Chris Carter]

Third, Platt said: “May your constant protection be the presence of God.” He told how Daniel was tossed into the lion’s den for insisting on praying to God, and God delivered him from the lions. Daniel testified to God’s protection, saying, “My God sent his angel and shut the lions’ mouths, and they have not harmed me, because I was found blameless before him” (Dan. 6:22).

“The same God who sent His angels to shut the mouths of lions is the same God who is leading you and is with you every step of your journey—the same God!” Platt said. “May your constant protection be the presence of God. Here’s the greatest news: Even if none of us was here, you would not be alone. You have nothing to fear, for He is with you!”

Finally, Platt exhorted: “May your life cause nations to give glory to God. In a world of many gods and many kings, tell the world there is one God of gods, and one King of kings. This is the point of the story. God designs our lives for the display of His glory.”

“God loves you for the sake of His glory among the nations,” Platt said. “His love is not intended to center on us; it is intended to spread through us. If we would just get that, it would change our posture in Christianity today.”

“Rev. 4:11 says, ‘Worthy are you, our Lord, to receive glory, honor and power, for you created all things, and by your will they exist and were created,’” shared Rose Sharkey*, who is sent with her husband, Alvin*. “God is worthy to receive glory by the proclamation of His name among His creation who do not know Him,” Alvin added.

The Sharkeys are going to share God’s glory among Buddhist peoples of South Asia. Like all IMB missionaries, they are supported by Southern Baptists’ faithful gifts through the Cooperative Program and the Lottie Moon Christmas Offering®.

“It is emphasized that the Lottie Moon Christmas Offering is spent in that calendar year, out in the field, going into missions,” Melton said, reporting from the IMB Board of Trustees meeting. “The stewardship of the resources is just exemplary.”

The next IMB Sending Celebration will be Wed., Nov. 14, in Richmond, Va.