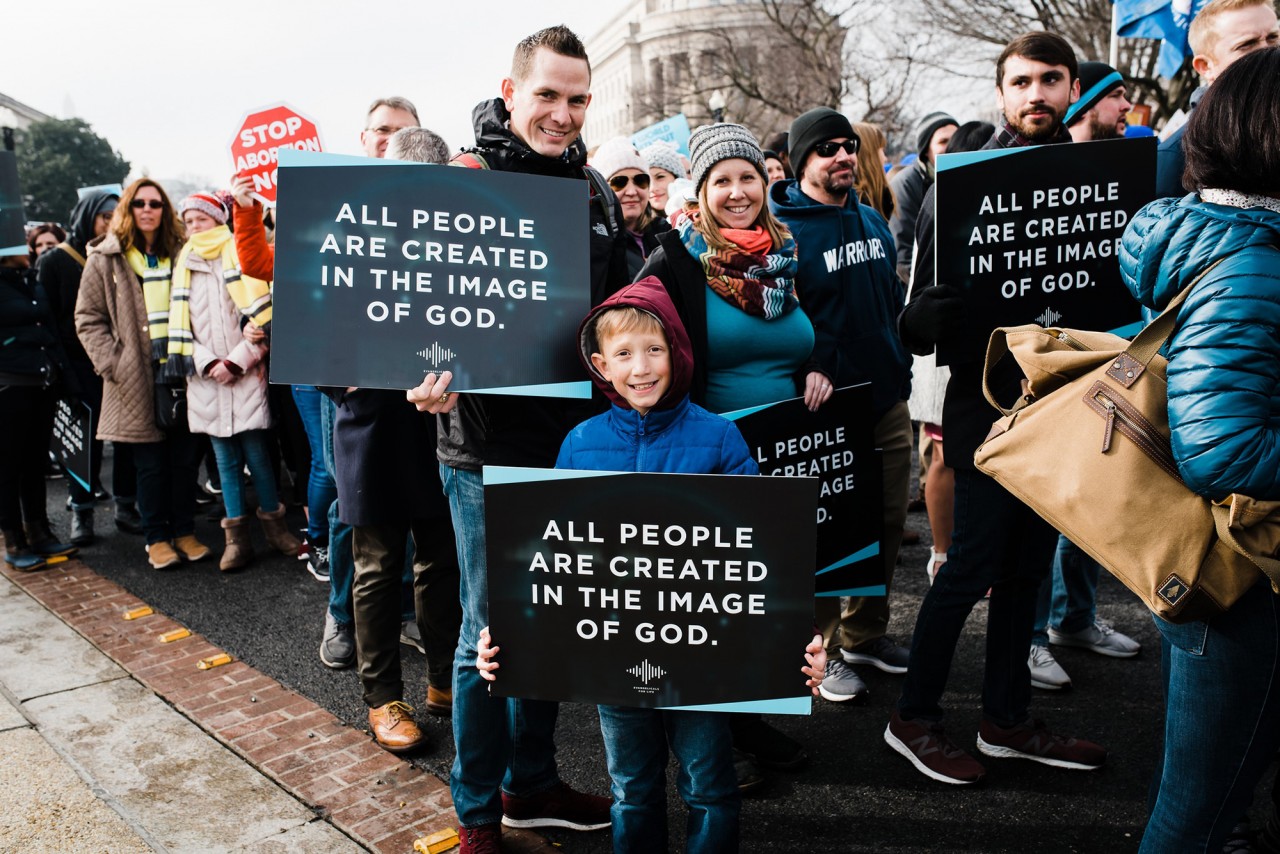 WASHINGTON (BP) — Southern Baptists joined tens of thousands of other Americans in demonstrating their pro-life convictions during the annual March for Life Jan. 18 in Washington, D.C.

A contingent of those who participated in the Evangelicals for Life (EFL) conference Jan. 16-17 took part in the march and the rally that preceded it on the national mall. Many attendees and staff of the Ethics & Religious Liberty Commission (ERLC), which sponsored the EFL conference at McLean Bible Church in suburban Washington, carried signs that said, “All people are created in the image of God.”

ERLC President Russell Moore, who was among the marchers, said in written comments, “Year after year, we march with thousands of other pro-life Americans. And every year I long for the day when we won’t have to do so. I pray for the day when the most vulnerable are protected and women and children, born and unborn, are valued such that marching for life will seem as unnecessary as marching for gravity.”

The March for Life has been held every year since 1974, one year after the Supreme Court legalized abortion throughout the country in the Roe v. Wade decision Jan. 22, 1973.

After Mike Pence introduced Trump, the president announced in a video message his commitment to maintain federal pro-life policies after the Democrats gained the majority in the House of Representatives in the November election. In a letter to House Speaker Nancy Pelosi the same day, Trump pledged to veto “any legislation that weakens current pro-life Federal policies and laws, or that encourages the destruction of innocent human life at any stage.”

The president told the massive crowd that the pro-life movement is “founded on love and grounded in the nobility and dignity of every human life.”

“We know that every life has meaning and every life is worth protecting,” he said. “As president, I will always defend the first right in our Declaration of Independence — the right to life.”

Trump’s letter came three days after 49 senators and 169 representatives sent letters thanking him for the pro-life policies of his administration and asking him to pledge publicly to veto any bill that undermines federal law on abortion or abortion funding.

Some Southern Baptists explained to Baptist Press during the March for Life why they participated.

Coleman Philley, senior pastor of First Baptist Church in Katy, Texas, said the march “provides an opportunity to support a holistic, biblical view from birth all the way to the last seasons of life.”

While local churches may wonder how they can contribute to the pro-life cause, “coming out here gives a tangible sense” so Christians can return to their local churches and “be re-motivated to stay true” and support the sanctity of human life.

Kaitlyn Wester, a member of The Summit Church in the Raleigh-Durham, N.C., area, said, “[E]very human life is important.”

“I think [the march] is a really important thing to be a part of and wanted to show my support,” she said of her first time to attend the event.

Evan Lenow, associate professor of ethics at Southwestern Baptist Theological Seminary in Fort Worth, Texas, said of his first time at the march, “I think it’s important to me to be able to go back to my students and say, ‘This is what is happening in our world around us. This is how people are trying to influence their elected officials.’

“And hopefully in the future maybe we can have some more students come up here and participate,” Lenow said. “Or maybe even as they go and lead their churches after they graduate from Southwestern, they bring people from their congregations up here.”

“If you look around the march, it’s heavily Catholic, and it historically has been,” Lenow said. “And so I think it’s important for us to join with groups like the Catholic Church in a situation like this where we can say, ‘Listen, we’re on board. We’re cobelligerents … to try to make a difference and try to stem the tide of abortion.”

Members of Congress, as well as a state legislator, addressed the pre-march rally.

Katrina Jackson, a Democratic state representative in Louisiana, said she is asked by people in her state, “Why are you — a black, female Democrat — fighting for life?”

“I say, ‘Because I’m a Christian first,'” Jackson told the crowd. “And then I tell them that Proverbs [says] God hates the shedding of innocent blood.”

Two former participants in the abortion business spoke to those attending the rally.

Kathi Aultman of Jacksonville, Fla., shared the story of her conversion from abortion doctor to pro-life advocate. She told the crowd, “Thank you for protecting those who cannot protect themselves, those who wouldn’t have a chance to live if you did nothing.”

Abby Johnson, a former Planned Parenthood clinic director in Bryan, Texas, said the organization she founded — And Then There Were None — has helped facilitate the conversion of almost 500 abortion workers. “Let’s work to make abortion unthinkable in our nation,” she said.

After the rally, the crowd marched on Constitution Avenue from a site on the national mall to the Supreme Court building on Capitol Hill.