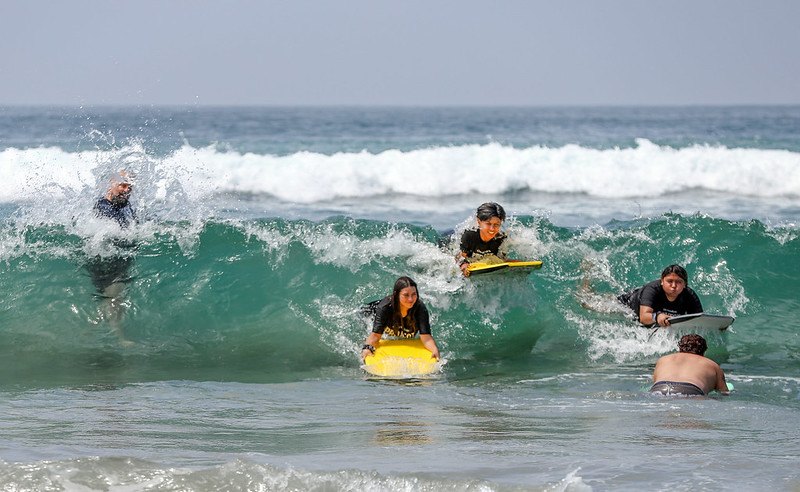 Above: Participants of an event sponsored by Project Support Anaheim’s Youth (S.A.Y.), a youth development program in Anaheim, Calif., learn to bodyboard during an event held at Huntington State Beach Park as part of Crossover Anaheim, June 11.

Local churches, the Orange County Southern Baptist Association (OCSBA), the CSBC and the North American Mission Board (NAMB) combined efforts to equip local churches to love and serve their communities through sports camps, block parties and other outreach-oriented events.

Southern Baptist seminaries spent the week training and going door-to-door to share the Gospel and invite people to the church events. Early reports indicate that the students knocked on more than 1,500 doors in neighborhoods around Anaheim and had more than 400 Gospel conversations. Final numbers will be shared during the Crossover report at the annual meeting Tuesday morning, June 14.

“The efforts of Southern Baptists during these Crossover events have been critical,” Ramirez said, “because, despite California’s ‘spiritual’ culture, there are still many people who have yet to hear the truth of the Gospel.”

Victor Chayasirisobhon, associational missions strategist for the Orange County Southern Baptist Association and current president of the CSBC, described Crossover as a “shot in the arm” for local churches.

“A lot of churches got used to either being online or really rebuilding (due to the pandemic),” Chayasirisobhon said. “But with Crossover, it’s helped us to again to be bold, with the support of our brothers and sisters from national and the state, to be bold and just go for it in our communities again.”

Anaheim, First Southern, where Chayasirisobhon pastors, hosted a sports camp on its campus where kids learned about how to play basketball and soccer. Volunteers also set up tents where students could learn about the Bible, and to wrap up the event, the church provided food and presented the Gospel.

“If we’re going to see Southern Baptists turn the tide in reaching people for Christ, it will take a movement of God in our churches,” said Tim Dowdy, NAMB’s executive director of evangelism. “Across all levels of the SBC, our goal is to encourage and equip local churches to share the Gospel with their communities until the whole world hears.”

Ed Litton, SBC president and pastor of Mobile, Ala., Redemption, served with churches in Claremont and Pomona, along with his wife Kathy as part of Crossover.

“Kathy and I had an amazing experience today working side by side with two churches – one English speaking, one Spanish-speaking—to reach their community,” Litton said. “The two churches share resources and strategy. They genuinely do life together in leading their churches. It was an honor to partner with them to distribute food to the homeless and others in need while we shared the love of Jesus.”

Anaheim, Sandals Church hosted a sports camp where children learned to play basketball and volleyball before a Gospel presentation that wrapped up the camp. Several kids from their community participated in the event.

“The most exciting thing has been that some of the neighborhood kids came out,” said Lori-Lynn Navarro, a part of the staff team who helped put the event together. “We’ve been working hard in the last year and a half to share with them, and we’ve had a lot of them come out.”

Chris Lohman, pastor of Huntington Beach, Calif., The Garage Church, hosted a surf camp as a way to meet new people in his community and share the Gospel. Lohman planted The Garage Church in 2020.

“This city needs tons of prayer, lots of it,” Lohman said. “Because we have 200,000 people here, and not half of them are Christians. So we’ve got a lot of work to do, so we need a lot of prayer. Our plan for this event is to let people know there’s a place for them in our community. Perhaps, God’s got to work for them, and they don’t know where to go. This is a great place to start.”

Felton Patrick Christian, current director of outreach for Yorba Linda, Calif., Friendship, presented the Gospel after the church hosted a block party for its community.

“That’s why we’re having this Crossover event so that everyone may hear the word of the Gospel and put their faith in Jesus,” Christian said.

Crossover provided a reminder that dozens of Southern Baptist churches and missionaries will continue reaching out and ministering to their communities after the SBC annual meeting concludes next week.

“We know that people will not come to saving faith without first hearing the truth of God’s Word,” Ramirez said. “We are grateful for NAMB’s vision to reach the lost in California and are excited to continue to work in partnership with them for the kingdom.”