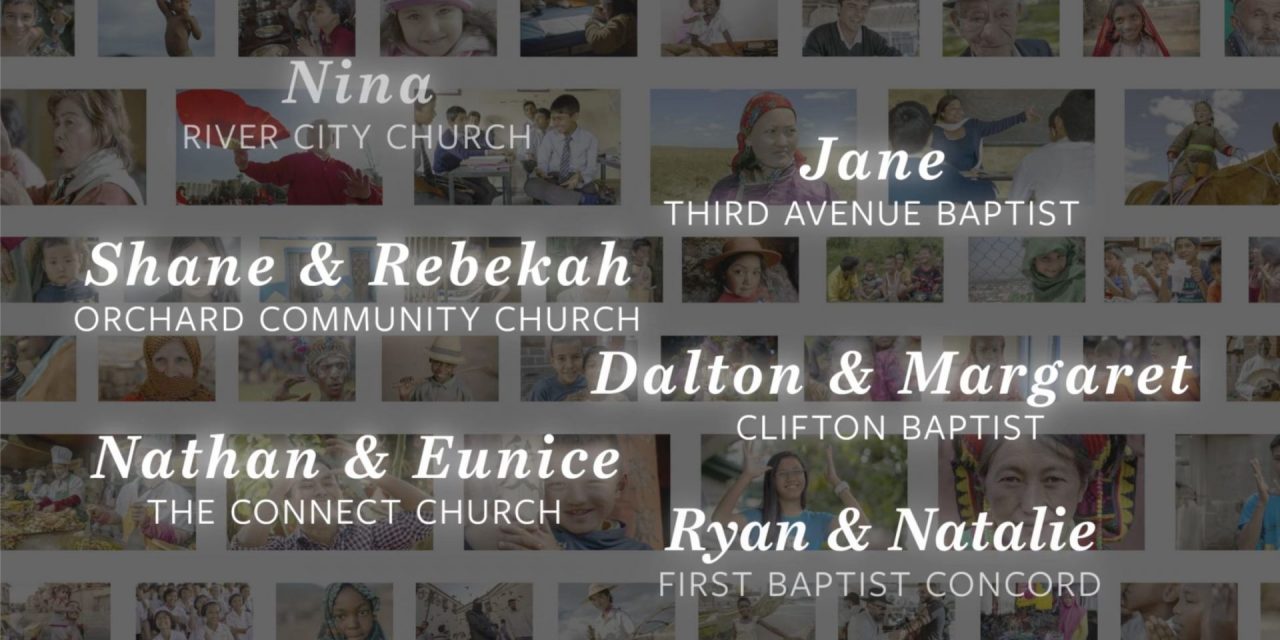 RICHMOND, Va.—On Nov. 18, the International Mission Board (IMB) celebrated the appointment of 79 new missionaries in a virtual Sending Celebration streamed on Facebook and through the IMB: Advance the Kingdom app. The missionaries were previously approved by IMB trustees. The missionaries come from 21 states and will serve in eight of IMB’s nine affinities.

The Sending Celebration was scheduled to be in Alabama at the annual Alabama Baptist State Board of Missions meeting. Due to COVID-19 restrictions, the celebration was observed virtually.

“We are excited that 79 new missionaries are being sent tonight,” Chitwood said. “Thanks to your generosity through praying and giving, we are able to send and sustain these missionaries.”

Rick Lance, executive director for the Alabama Baptist State Board of Missions, prayed for the missionaries.

“The Great Commission is not on pause and is certainly not in quarantine,” Lance said. “Our prayer is they will be encouraged by Your Holy Spirit’s presence and empowering them in their lives.”

Due to time constraints, 30 missionary testimonies were included in the Sending Celebration. Videos of all 79 missionaries, grouped by affinity of service, are available for viewing at imb.org/send.

As the missionaries move to their respective countries, they will join teams working to provide people the opportunity to hear the Good News. Every day, 154,937 people die without knowing Christ.

This staggering reality helped lead Robert and Elizabeth Bourne* to respond to the call to serve overseas. Robert traveled on a short-term trip where he met people who had never heard the name of Jesus.

The Bournes will serve in Thailand on a team focused on medical missions. Robert, a pharmacist, will use his profession to offer physical healing and share the name of Jesus. The Bournes are being sent by Norman, Bethel to serve in Thailand. Here is their video presentation:

Josh and Rebekah Storey will also be using healthcare to reach the nations. The Storeys are moving to Sub-Saharan Africa with their children to serve on a team that utilizes healthcare strategies.

“Moving to Africa with five boys—you have to be crazy or called,” Josh said.

“Or both,” Rebekah said, smiling. “We can’t wait to get started.”

“For our whole lives, He has been preparing us to respond to His calling. We are called by the Father, compelled by the gospel, commissioned by the Son and empowered by the Spirit,” Josh said.

The Storeys are being sent by Omaha, Neb., Emmaus, to serve in Sub-Saharan Africa.

Jessica Baniewicz knew she was called to serve but struggled with contentment and wanted to be married.

“God has shown me the community of the church and that He is enough. God’s call in my life is more important than being married or having a family,” Baniewicz said. “I thought that going to the mission field would look a certain way; that I would be married or have some grand instance that would tell me to go. I know I am supposed to go, but I was just waiting for it on my terms.”

Baniewicz first served as a journeyman with the IMB in London. When she went through the interview process for career service with the IMB, she wasn’t sure where the Lord was leading her to serve next.

After talking with an IMB team serving in Barcelona, Spain, she was blown away by how the Lord responded, how God confirmed where He wanted her to serve and how He gave her a team that affirmed her calling to serve as a single.

“I had prayed for specific things in a team and job, and they touched on every single one of them,” Baniewicz said. “I prayed for a team I could work with that would go out and share the Gospel with me, that would encourage me and help me, for a team that would be looking for a single female, a team that had the same theology as me when it comes to church planting, and builds relationships with the locals around them.”

Barcelona’s evangelical population is less than 2 percent, and Baniewicz said the number of committed Christians is even lower.

“After praying, I knew God was calling me to this place where they may have the Gospel in their language, but no one has made it real in their life,” Baniewicz said.

Baniewicz is being sent by Louisville, Ky., Clifton to serve in Barcelona.

In addition to the missionary testimonies, the Sending Celebration highlighted available job positions in each affinity. The positions include a role as a media specialist in the Americas affinity, a sports and business evangelism role in Central Asia, and a women’s ministry strategist in South Asia.

“One hundred percent of your gifts transforms lives with the Gospel,” Chitwood said.

The Sending Celebration concluded with video messages from friends, pastors, small groups and churches telling IMB missionaries they are praying for them.

As a celebration of the IMB’s 175-year history this year, the 2020 Lottie Moon Christmas Offering® (LMCO) goal is $175 million. Would you and your church consider joining us in reaching our LMCO goal? Learn more.