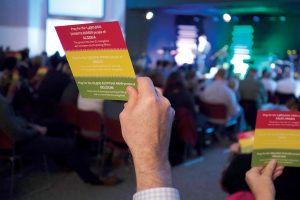 Those gathered to celebrate the appointment of 42 new IMB missionaries hold cards with the names of people groups around the world. The group prayed for each people group by name.
[Photo by Chris Carter]

RICHMOND, Va.—Southern Baptists celebrated the appointment of 42 new missionaries in a service on Wed., Nov. 14, near Richmond, Va. Churches of all sizes from Louisiana to Indiana and North Carolina to Oklahoma are sending singles, couples and families to large cities, small villages and hard-to-reach places around the world.

Vance Pitman, senior pastor of Las Vegas, Va., Hope, reminded new missionaries and those who attended of the importance of cooperative giving and cooperative going.

“This is our denomination at its absolute best,” Pitman said. “This is the tip of the spear. We can do more together than we can do by ourselves.”

At Pentecost, a small group of people launched a church in Jerusalem that saw 3,000 people saved on its opening day, Pitman said. “That is a successful church start!” he exclaimed.

“At their second gathering, 5,000 men came to Christ, not counting the women and children,” he continued. “Within six months, the church had grown to over 100,000 believers in Jerusalem. … Within a few years the Gospel had spread throughout their region of the world, and in less than 40 years, the message of Jesus had reached every corner of the known world.”

The 42 missionaries will serve in countries around the world. Many of those appointed could not be identified publicly for their own safety. Pitman reminded them that the first Christians were also called to start a church in Jerusalem—“a place where Jesus was whipped, beaten, tried, crucified and buried; a place that hated them and their God.”

Each of the new missionaries shared testimonies of how God led them to the point of giving up the comforts of their everyday lives to take the Gospel around the world. They came from large and small churches and a variety of backgrounds.

Chris and Anna Garduce, sent to serve in Madagascar by West Columbia, S.C., West Vista, shared how God “rescued” each of them and gave them each a zealousness to share the grace they received with those who have not yet heard the Good News.

“So many people need to be rescued from darkness and brought into His marvelous light as I was,” Chris told the crowd.

From the moment she met Christ, “there has been a roaring fire inside my heart to see the nations worship and love King Jesus,” Anna said.

Nathan and Kim Gunter grew up in small churches where they saw the cooperative giving of Southern Baptists send men and women around the world with the Gospel. After college, Nathan also served a two-year appointment with the IMB among a desert people group in West Africa. Short-term trips gave the couple a “growing passion” for God’s work in Africa.

“Now after years of pastoring an amazing church family here in the U.S., the Lord has made it clear that He is calling us to serve in Africa,” Nathan said.

The couple is being sent to Sub-Saharan Africa by Lansing, Kan., First.

Waynesburg, Ky., Pleasant View is sending Jonathan and Rebecca McNeil to serve in Poland, where Jonathan grew up.

“Growing up as a missionary kid in Poland, God opened my eyes to the lostness of the world and the saving power of the Gospel through a personal relationship with Jesus,” he said. “In 2013, God opened the door for me to return to Poland as a single IMB missionary.”

“Personal Bible study and biblically faithful preaching opened my eyes to God’s plans for the nations to worship Him through His Son,” Rebecca said. “As I prayed for God to send workers to the harvest, He made it clear to me by sending me to serve (a two-year assignment) in Poland.”

Describing what it must have been like for the disciples as they watched Christ ascend into heaven and leave them with the task of global evangelism, Pitman encouraged the new missionaries to embrace the “desperation that produces prayer.”

“The disciples returned to Jerusalem and ‘devoted themselves to prayer,’” Pitman said. “And they didn’t stop praying until God showed up to tell them how they were going to do what God told them to do.”

This singular focus prepared those early disciples for the outpouring of God’s Spirit that came at Pentecost, Pitman said, cautioning, “Prayer is not powerful. The One to whom we pray is powerful.”

The next IMB Sending Celebration is scheduled for Wednesday, Feb. 6, 2019, in Richmond.