FORT BENNING, Ga. (BP) — As he held the remote for the Claymore mine, Pat Hash started to grow concerned. The target had not arrived on schedule, and the ambush could be impacted by the delay. Thankfully, however, this was a training exercise for students in the U.S. Army’s Ranger School and not live combat. 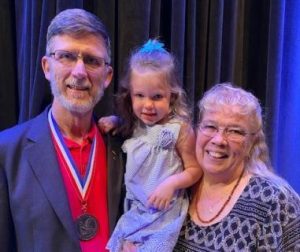 Chaplain (Colonel) Pat Hash, U.S. Army, retired, with his wife, Lynn, and their granddaughter. Chaplain Hash was inducted into the U.S. Army Ranger Hall of Fame on July 13, 2022. He is the third Southern Baptist chaplain to receive the honor. Photo submitted

Hash had an experience with God as he waited there for nearly an hour that would, almost 50 years later, lead to his becoming the third Southern Baptist chaplain to be inducted into the Army Rangers Hall of Fame on July 13, 2022, during a ceremony at Fort Benning.

The induction came after 37 years of service in the Army, nine years in the infantry and 28 as a chaplain. He retired as a colonel serving his last assignment as the U.S. Army Special Operations Command Chaplain. The honor is bestowed upon inductees by a board that’s made up primarily of their peers, a group of retired and active Rangers. The Hall of Fame is comprised of fewer than 200 Rangers.

During his brief acceptance speech, Hash highlighted three defining moments in his life: accepting Jesus as Savior, marrying his wife, Lynn, and deciding to join the Ranger community.

“To think back to 1975 when I was in Ranger School and God called me to be a pastor to Special Ops and Rangers, the honor was a validation from God that I had followed what he had asked me to do,” Hash said.

God’s call came as Hash prayed in the north Georgia mountains during that 1975 training exercise.

“As I was sitting there, God said, ‘Listen, I want you to finish this school, it’s important,’” Hash recalled. “’I want to you to spend time in the Army to learn the Army, but then I am going to call you back in as a chaplain.’”

Hash finished his undergraduate degree, left active duty, joined the Reserves, and went to Southern Seminary in Louisville, Ky. He pastored a pair of churches during his time in seminary to gain the experience required to enter military chaplaincy as an endorsed, Southern Baptist chaplain.

Much of Hash’s ministry was spent with the Army’s Special Operations unit.

“I was always seeking to stay in Special Ops as much as I could. I’d been to Ranger School, and I’ve had several assignments in Special Ops,” Hash said. “Special operators tend to stay a long time because they have a special skillset. So, you need chaplains who are willing to be able to spend some time with those guys and develop trust.”

The soldiers he spent time with were wonderful people, Hash said, and many came to know Christ as their Savior through the ministry of the chaplains who served them.

“God had a hand on what he wanted me to do,” Hash said. “It just took me a while to say, ‘Yes. I hear you, and I want to glorify You. I want to present Christ to these guys, whoever I come into contact with.’”

Southern Baptist chaplains who preceded Hash into the Army Ranger Hall of Fame were Jeff Struecker, who spent much of his time in the Army with the 75th Ranger Regiment before later serving as a chaplain, and Chaplain (Colonel) Steve Berry, who served 30 years as a member of the U.S. Army Chaplains Corps before retiring.

“Pat’s selection is tremendous news and is indicative of the high caliber of Southern Baptist military chaplains,” said Doug Carver, executive director of chaplaincy at the North American Mission Board. “During his ministry, Pat consistently lived the Army Ranger values as he ‘led the way’ as a faithful, courageous, and compassionate witness of Jesus Christ to his fellow Rangers, Service Members, and their families.

“I’m grateful that Pat volunteered for Ranger School years ago so that he could minister the hope of the Gospel within the elite branch of the Army’s Special Operations units.”

Chaplain Hash and his family moved 26 times during his military career, a career he didn’t get serious about until a full year after he and his wife were married in 1973. Never once did his wife complain, Hash said, and her dedication and support was emblematic of the majority of military spouses. Chaplains regularly provide spiritual support to soldiers’ families who practically become single parents when their spouses deploy.

“I looked at it as an honor every time we deployed, whether it was for a training event or for a real-world event, or it was into combat,” Hash said.

God protected these military members, often bringing them through conflict where they should not have gotten out alive, Hash said. When they did lose people, he saw soldiers come together to honor one another and keep up with the families of those they lost even into the present.

“They’re a very close-knit people who understood, many of them, that God was in their life, and you could just see his hand on them,” Hash said. “They professionally and honorably did their job and what the nation asked them to do, which was a very difficult task.”

After retiring in 2011, Hash made the transition from military chaplaincy into the pastorate and served a church for eight years near Fort Bragg in North Carolina before retiring from the church and serving as an interim pastor for various churches in the last few years. In May 2023, he and Lynn will celebrate 50 years of marriage.

“I still get emotional when I think about all the great people that I had the opportunity to serve with, not only the Ranger community but in the Army as a whole,” Hash said. “I am so thankful to God for allowing me to do that on active duty and still do it as a retiree.”