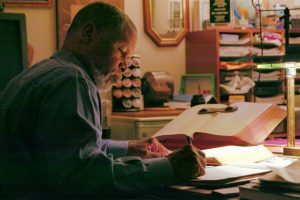 LeRon West, pastor of Tulsa, Gilcrease Hills, shared in the SMO video that being a Multi-Vocational Pastor involves a ‘balancing act’ that includes time to study the Word. [Photo provided]

TULSA—A church sanctuary appears with scenes focused on the pews, stained glass windows, piano and a hymnal opened to “Turn Your Eyes Upon Jesus.”

At first, LeRon West, pastor of Tulsa, Gilcrease Heights, speaks as a voiceover, and then he appears in the video promoting the Edna McMillan State Missions Offering (SMO).

“The call on your life, first as a Christian and then as a minister, has precedence over everything,” West said. He shared how he has been serving his church as what is commonly known as a bivocational pastor, but this title has been recently changed among the Baptist General Convention of Oklahoma (BGCO) as “MVPs”—Multi-Vocational Pastors.

“When they hired me here,” West said about serving at Tulsa, Gilcrease, “I had to have my financial support from somewhere else because the church couldn’t afford to pay me. So the issue is protecting the time to study the Word, the time with your family and the time with the church. And then, the time that you have to earn money. It’s a balancing act.”

West shared he worked with the fire department as a fire marshal. He also worked in real estate and is a licensed electrician. He said these extra jobs helped raise his children and pay his bills.
Philip Jones, BGCO MVP strategist, shared in the video that there are 1,491 Oklahoma Baptist churches led by MVPs. 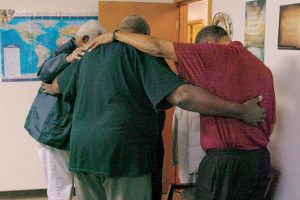 West then continued in the video saying he never looked to the church to totally support him financially. “I don’t know what that’s like,” he said. “Even if I felt like quitting, I don’t get to quit. I’m not the One who chose me.”

West is shown leading a prayer time at Tulsa, Gilcrease Heights. “We don’t want to take anything for granted,” he prayed.

As his narrative continued, West describes what it has been like for him to be an MVP, serving at a church that is in the vicinity of downtown Tulsa.

“It’s been a work of joy. The joy for me is seeing somebody’s life change that I know is having a struggle in their life, spiritually.” West had an emotional pause as he reflects how God has worked. “This is great,” he confesses while choking up with tears forming in his eyes. “It’s worth it all.”

Jones shares how important MVPs are. He explained, “For Southern Baptists to reach the state of Oklahoma, multiple-vocational pastors are key to doing that because we have to have men who are willing to go into areas where they’re not going to be fully funded. It is absolutely essential that we have these guys.” 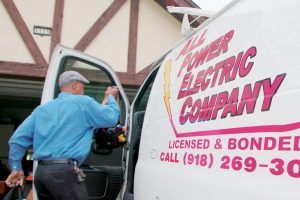 He literally has had multiple vocations, as he also served with the fire department, worked in real estate and also has his own business as an electrician. [Photo provided]

Jones shared how important the SMO is for MVPs. “When you give to the State Missions Offering,” he said, “the funds will help us do things like MVP Pastors and Pastors’ Wives Retreat. This offering will enable them to be better MVP pastors.”

West concluded the video sharing why he thinks the SMO is important. “There are things that the BGCO and the State Offering supports that I wouldn’t be able to accomplish without their support. We’re just better together.”

The four SMO promotional videos can be viewed at www.statemissionsok.org/video. Links are provided on the website to download the videos and share in worship services, Sunday School small groups or any church gathering.