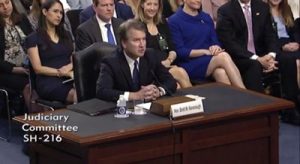 As confirmation hearings opened Sept. 4 for U.S. Supreme Court nominee Brett Kavanaugh, his views on abortion were among the topics discussed by supporters and opponents. [Screen capture from U.S. Senate Judiciary Committee]

The Judiciary Committee’s top Democrat, Dianne Feinstein of California, expressed concern about Kavanaugh’s seeming willingness to restrict abortion rights, and more than 30 protestors were arrested in the hearing room, including some who touted abortion rights.

Meanwhile, some evangelical commentators affirmed Kavanaugh’s judicial philosophy and said it seems to stand against court rulings over the past 40 years that expanded abortion rights.

“The hearings are important to illustrate the intense emotional collision of competing worldviews among politicians, lawyers and regular citizens who care about constitutional rights,” said Mike Whitehead, general counsel for the Missouri Baptist Convention and co-counsel in several cases that have gone before the Supreme Court.

“Freedoms and rights given to us by God are supposed to be guarded by the Constitution,” Whitehead told Baptist Press via email. Late Justice Antonin Scalia warned in a dissent to the Supreme Court’s 2015 legalization of same-sex marriage “that five un-elected justices have become, in effect, our ‘rulers’ because they act as law-makers, not just law enforcers. This nomination is a huge step in the direction of strengthening the rule of law rather than the rule of men. That bodes well for religious freedom and issues of concern to evangelicals.”

Regarding abortion, Whitehead said, “Judge Kavanaugh is not a sure vote to reverse [the landmark abortion rulings] Roe [v. Wade] or [Planned Parenthood v.] Casey, no matter what his hysterical opponents say. He is a sure vote for the rule of law, governed by the text of the Constitution, and not the rule of un-elected judges, ‘re-voicing’ the law to say whatever they want it to say.”

Trump announced Kavanaugh’s nomination in July. Currently, Kavanaugh, 53, serves as a judge on the District of Columbia Circuit Court of Appeals.

Opening statements by senators and Kavanaugh were delayed nearly an hour and a half while Democrats made motions to halt the hearing over what they called the insufficient number of documents provided to them. They sought review of 100,000 pages from Kavanaugh’s record withheld from Congress by the Trump administration. Democrats also sought time to review 42,000 pages released to the Judiciary Committee Sept. 3 by the George W. Bush administration from Kavanaugh’s White House tenure as senior associate counsel and staff secretary.

Countering Democrats, Judiciary chairman Chuck Grassley, R-Iowa, told Fox News the Senate has “more documents” on Kavanaugh “than anybody else in the history of Supreme Court nominees.”

When opening statements finally got underway, Feinstein said the question is not whether Kavanaugh believes the Supreme Court’s 1973 decision legalizing abortion is “settled law” but “whether you believe it is correct law.” She expressed concern with Kavanaugh’s dissent earlier this year from a decision by the D.C. Circuit Court of Appeals ordering the Trump administration to grant abortion access to a pregnant immigrant teen in the U.S. illegally.

Just before noon Eastern Time, the Women’s March protest movement reported a total of 30 women had been arrested for disrupting the hearing to object to Kavanaugh’s confirmation. Capitol Police said that by mid-morning, 22 protestors had been charged with disorderly conduct.

One protestor shouted, “This lifetime appointment will be devastating to women’s rights, voting rights, gay rights,” The Washington Post reported.

Bruce Ashford, provost at Southeastern Baptist Theological Seminary, wrote in a Sept. 4 op-ed for Fox News that Kavanaugh should be confirmed based on his “legal credentials,” “judicial philosophy” and “personal character.”

Kavanaugh opposes the “living document” view of the Constitution, Ashford wrote, which “contends that judges have the right to reinterpret the Constitution in light of ‘the times.'” That view “enabled” the court to legalize abortion on demand in 1973 and same-sex marriage in 2015.

R. Albert Mohler Jr., president of Southern Baptist Theological Seminary, said senators should be concerned with the Constitution and “the historic role of the United States Supreme Court” rather than with advancing “political outcomes and goals that are not going to be possible by legislation.”

“Listen for how everyone in this conversation, in the hearing process uses the word rights,” Mohler said Sept. 4 on his podcast The Briefing. “What does the senator or what does the nominee mean when the word rights is invoked? Is this something that is simply an affirmation of what God has given every single human being in creation? Is it a set of rights that are revealed in nature even as the Declaration of Independence declared? Or are these rights simply political realities put in place by politicians, or perhaps constructed by judges?”

Kavanaugh had not made his opening statement by BP’s publication deadline. But he stated in excerpts released Sept. 4 by the White House he would seek to be “a neutral and impartial arbiter” on the Supreme Court.

Senate Republicans are aiming to confirm Kavanaugh before the November’s general election.