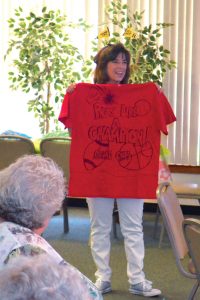 The common phrase “You’re never too old to learn” was demonstrated at Oklahoma City, Portland Avenue, which hosted a Senior Adult version of Vacation Bible School (VBS), July 9-12. By midweek, the church had almost 20 seniors saying “Y-E-S to VBS.”

“Of course, we never say no to VBS,” McKean said. “We say yes to VBS any time. So we decided to put it on our calendar and started promoting it. We weren’t sure what kind of turnout we would have, but they have responded well.”

Unlike a traditional VBS that meets for approximately for four hours, this VBS met from 9:30-11:30 a.m. each day. However, each meeting had numerous similarities, including pledges to the American Flag, the Christian Flag and the Bible. Miss Carrie, an experienced VBS song leader, also led VBS attendees in singing and doing the motions to the songs that went with the popular VBS theme of “Game On” this year.

“Most of our people were apprehensive about coming, but it has been a fantastic experience,” said Eli Sheldon, retired historical secretary of the Baptist General Convention of Oklahoma and member of Portland Avenue. “We have enjoyed every part of it. The organization of it is good, and the presentation of it is excellent.”

Like children who attend VBS, Sheldon said he and his VBS classmates have been learning the memory verse, 2 Pet. 1:3, “His divine power has given us everything required for life and godliness through knowledge of him who called us by his own glory and goodness.”

Each meeting also has an emphasis on missions. On Tuesday, July 10, McKean introduced a video presentation of International Mission Board missionaries Albert and Kirsten Hesskew who are serving in Poland. 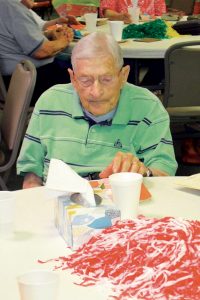 “We especially incorporate missions because we know how important the missions element is at Vacation Bible School,” McKean said.

Pastor Walter Mullican led a time of Bible study and had many participate and ask questions during his July 10 study on the raising of Lazarus. He was encouraged with the turnout of Senior Adult VBS.

“I don’t think enough of us knew what it was, at first, in order to convey it to them,” Mullican said about starting the Senior Adult VBS and whether or not people would be interested in attending. “This has been a great response. I think they get a ‘flavor’ of what the kids have done (during regular VBS). They now have a better understanding of the themes and songs, things that the kids experience at VBS.”

The Senior Adult VBS also featured refreshments and a recreation time. On July 10, the recreation time involved parachute games, as senior adults held on to the ends of the colorful parachute and played the different games children at VBS play.

“It’s geared so well for us and such a unique experience,” Sheldon said. “I think if they offer it again next year, it will have a much larger outcome.” 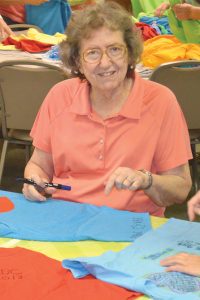 Oklahoma City, Portland Avenue is not afraid to try unique functions. Mullican said these events help the church be involved with those who live nearby.

“One thing that we have done in trying to be a vital church is we’ve had to look for creative ways to try to connect with our community,” he said. “We just see it as an opportunity to be known in the community, and then that gives us opportunities to share the Gospel.”

Portland Avenue also has a monthly dental clinic and hosts a karate club. Recently, the church hosted an obedience clinic for dogs. Probably the longest-running community ministry Portland Avenue has is its Whiz Kids program, which has been operating for 12 years, and the program has been helping children in the area learn to read. 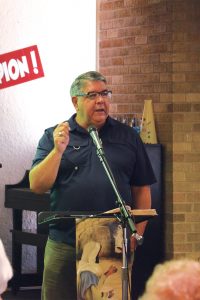 McKean said two of the experienced Whiz Kid tutors were attending the Senior Adult VBS, Jack and Betty Langston. Jack is now 97 and no longer tutors, but Betty continues to serve in Whiz Kids.

Although Jack is no longer tutoring, McKean shared a story of one of the boys he helped in Whiz Kids. McKean said the boy had to repeat the second grade because his reading skills did not allow him to advance. “Mr. Jack” worked patiently and extensively with his student.

Recently, McKean said, this young man graduated from high school with honors and received a scholarship to go to college. At his high school graduation, the young man thanked “Mr. Jack” for working with him and said he would not be who he is today without “Mr. Jack.”