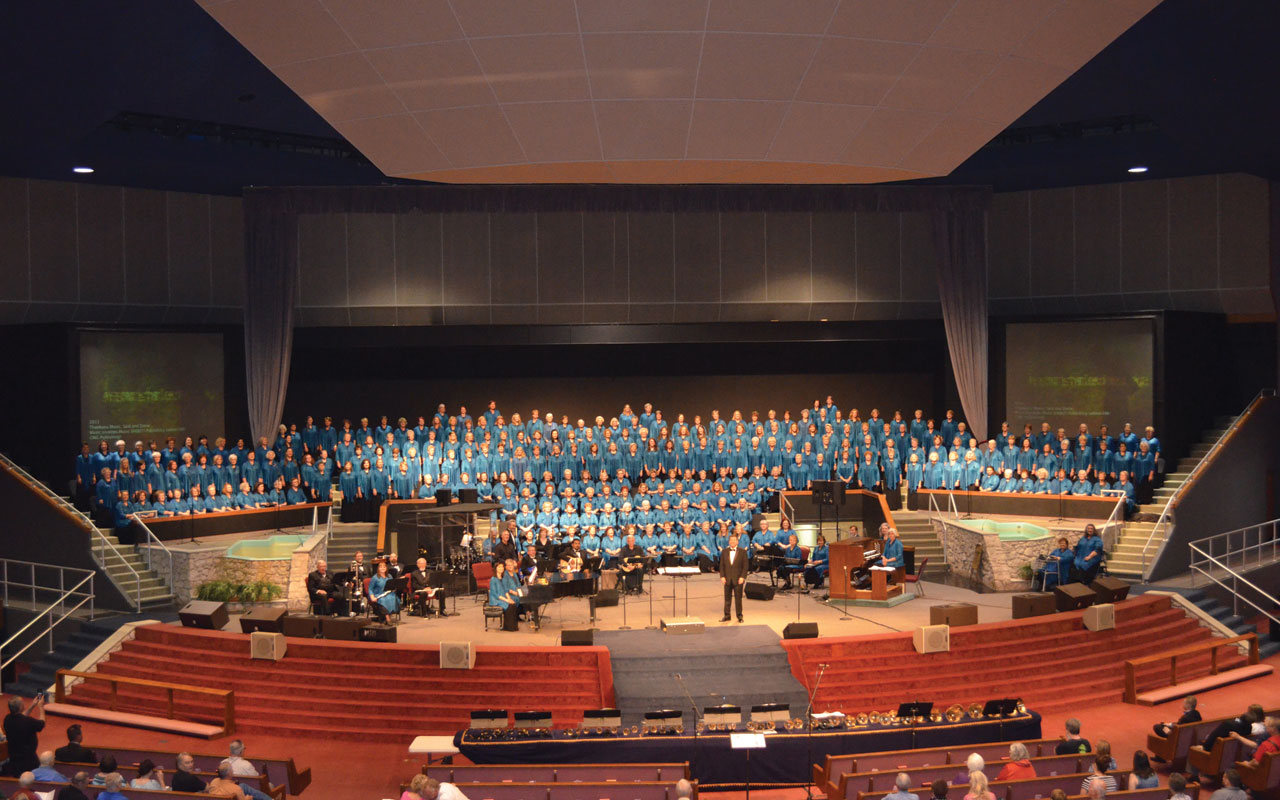 DEL CITY—The Singing ChurchWomen (SCW) of Oklahoma closed out their 2015-2016 season with a concert at Del City, First Southern the evening of May 5, and then 100 of them set their sights on May 30, the date they and 41 traveling companions depart for a 10-day mission trip to Northern Europe.

Led by director Randy Lind, the SCW will share the love of Christ in Finland, Estonia, Sweden and Latvia—the Baltic country that bills itself as “The Country that Sings,” probably because of traditional Latvian folklore, especially folk songs, which date back more than 1,000 years ago. More than 1.2 million texts and 30,000 melodies of Latvian folk songs have been identified.

But Latvia’s history hasn’t been all spirited dances and festive singing. Wikipedia says, “The Republic of Latvia was founded on Nov. 18, 1918. However, its independence was interrupted at the outset of World War II. In 1940, the country was forcibly incorporated into the Soviet Union, invaded and occupied by Nazi Germany in 1941, and re-occupied by the Soviets in 1944 to form the Latvian Soviet Socialist Republic for the next 50 years. The peaceful “Singing Revolution,” starting in 1987, called for Baltic emancipation of Soviet rule, ended with the Declaration on the Restoration of Independence of the Republic of Latvia on May 4, 1990, and restored independence on Aug. 21, 1991.

Located on the south side of the Baltic Sea between Lithuania and Estonia, Latvia, with a population of just more than 2 million, is known for its strong national identity, diverse culture, modern cities and landscapes ranging from wide beaches to dense, sprawling forests. Its capital is Riga, home to museums and churches, notable wooden and art nouveau architecture, a vast Central Market and a medieval Old Town.

During the 109th annual meeting of the Baptist General Convention of Oklahoma (BGCO) Nov. 9-10, 2015, Oklahoma Baptists forged a three-year missions partnership with the Union of Baptist Churches in Latvia. While a few others from Oklahoma already have made the trip to the Baltic state, the SCW group, just for its size, if nothing else, will make an impact and leave an impression.

“The whole reason for the trip is to point people to the Gospel,” Lind said. “At each one of our concerts, one of our pastors, or a local pastor, will share the Gospel. It’s strategic as I see it. We are at the very beginning of our partnership with Latvia. We are kind of the ice breaker, or the first wave of Oklahoma Baptists to go over there, if you will, so we are going to be the impression of Oklahoma Baptists that we leave with Latvians. The doors have been opened to us, and it’s a magnificent opportunity to share the love of Christ with our Latvian brothers and sisters.”

The SCW concert repertoire includes more than 20 songs, including a rendition of “Great Is Thy Faithfulness” completely in Latvian, and “How Great Is Our God,” during which they will invite the audience to join with them in singing the chorus in Latvian. Audiences are sure to enjoy a rousing rendition of “Oklahoma,” during which the SCW and their traveling companions will hand out bandanas and small state flags to those in the crowd.

The SCW concerts will all begin with an organ prelude and handbell performances by SCW members. A three-octave set of handbells, recently donated to the BGCO, will be given to Peteris Sorogis, president of the Latvian Baptist Union at the conclusion of the trip.

“Handbells seem to be a really big deal in Latvia,” Lind said. “As a special gift, we are presenting this very nice set of handbells to the Latvian Baptist Union.”

Concert stops begin with a June 1 appearance at St. Olaf’s Church in Tallinn, Estonia, where the SCW will sing with the Estonia Women’s Choir. Their featured concert is a ticketed event at the new Amber Concert Hall in Leipeja, Latvia.

“We will be the first gospel group to sing in the hall and the first women’s group to appear there as well,” Lind said.

As the tour nears its conclusion, it includes visits to two of Latvia’s prominent Christian organizations, the Baltic Pastoral Institute and the Talsi Christian School, where the ladies will present their final concert, June 6. The school visit also may include another health clinic and visits/work projects at a local retirement center. At the camp owned by the Latvia Baptist Union in Uzava, June 7, Sprogis will speak during a worship service and the SCW will prayer walk the campgrounds before heading back to Riga for a farewell dinner.

The tour concludes with sightseeing via boat on the Royal Canal in Stockholm, Sweden June 8 before the group departs for the return trip to Oklahoma the next day.