DALLAS (BP) – A diverse slate of speakers exhorted fellow pastors and church leaders to be faithful to their calling during the first two sessions of 2018 Southern Baptist Pastors’ Conference June 10-11 at the Kay Bailey Hutchison Convention Center in Dallas.

Centered on the theme “Fulfill Your Ministry” drawn from 2 Timothy 4:5, attendees were challenged to finish strong in their calling to local church ministry.

Juan Sanchez, pastor of Austin, Texas, High Pointe and president of the Southern Baptists of Texas Convention, issued a Texas welcome, opening the conference Sunday night by preaching on 2 Tim. 4:9-22.

“What will our ministry look like when … we come to the end of our ministry?” Sanchez asked, urging pastors to consider their needs, concerns and source of confidence as did the apostle Paul. 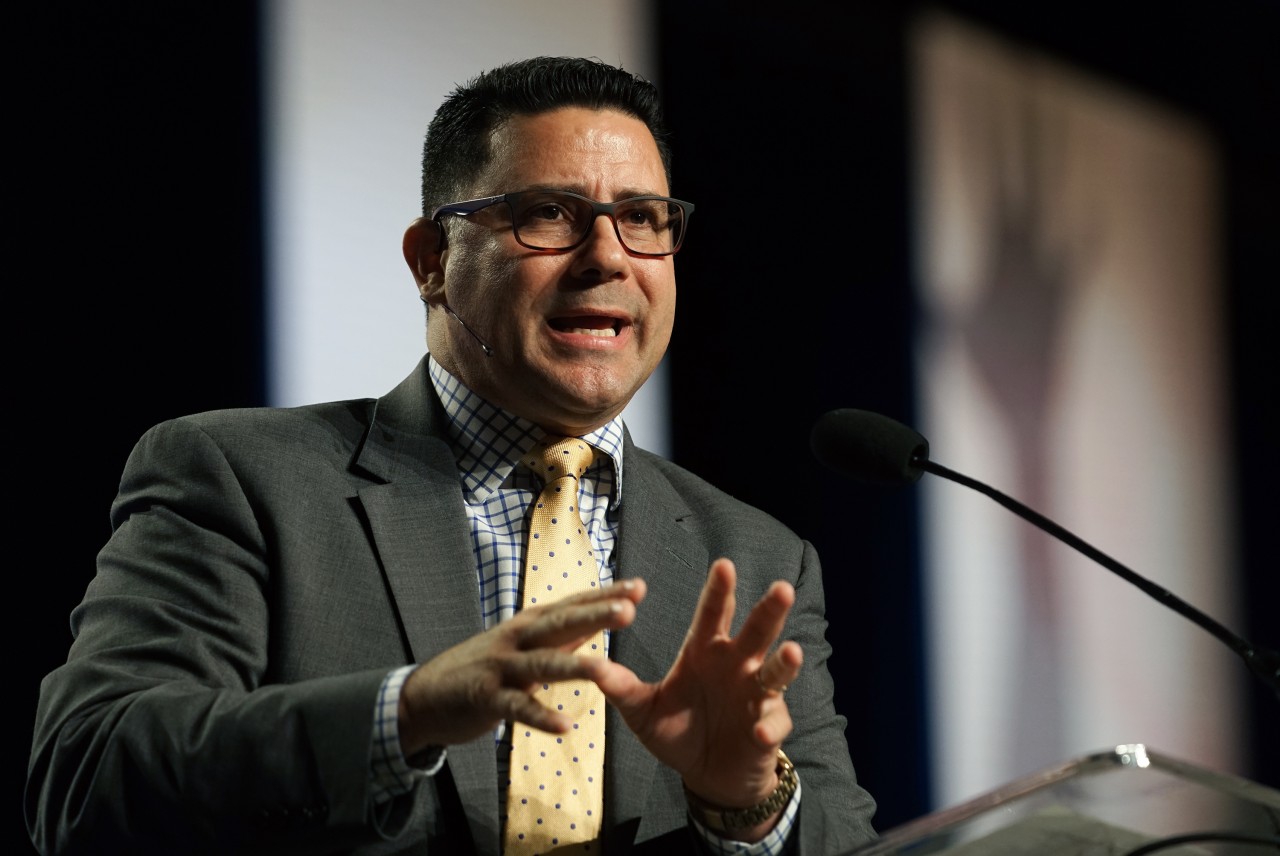 Paul’s needs included physical ones, Sanchez said. God has made us “whole persons” including body, spirit and soul, he said, emphasizing the importance of healthy lifestyles for pastors.

Paul’s other need was for “deeply rooted Gospel friendships,” Sanchez added, noting the apostle’s desire that Timothy “come soon” and his mention of both faithful and faithless friends.

“We need to have thick skins and soft hearts,” Sanchez said, which includes forgiveness and grace toward critics. He underscored the importance of accountability relationships, admitting his prior failure in this area. “We are not meant to be isolated. It is tragic if we are isolated. Connect,” Sanchez urged.

“Paul’s primary concern was the continuation of the Gospel ministry,” Sanchez said, likening Paul to a “general” directing the spread of the Gospel from prison and emphasizing the importance of training others.

Paul always remained a student of God’s Word. “We never finish our theological training and education,” the Texas pastor added.

As Paul warned Timothy of opposition, Sanchez told the audience to expect the same from within and outside the church. “Ministry is not easy,” he said, encouraging pastors to faithfully preach the Word and leave a “Gospel legacy.”

Paul’s “ultimate confidence rested in the Lord Jesus Christ,” Sanchez said, cautioning against placing “confidence in ourselves,” in numbers, buildings or locations. He closed by encouraging pastors not to become discouraged but to remember the “eternal plan of God.”

Citing Rom. 1:16 when the apostle Paul declared he is “not ashamed of the Gospel,” James Merritt, pastor of Duluth, Ga., Cross Pointe, urged pastors to be “Unashamed.”

Merritt began his sermon by reminding the audience that Norman Vincent Peale, former pastor of Marble Collegiate Church in New York City, wrote a book 65 years ago that propelled him into the American limelight. “The Power of Positive Thinking” and its central message explained Peale’s philosophy of preaching, Merritt said: “Believe in yourself! Have faith in your abilities!”

Merritt quoted Peale as saying, “I’m a conservative, and I will tell you what I mean by that. I mean that I have accepted the Lord Jesus Christ as my personal Savior. I mean that I believe my sins are forgiven by the atoning work of grace on the cross… Now, I’ll tell you something else… I personally love and understand the way of stating the Christian Gospel. But I am absolutely and thoroughly convinced that it is my mission never to use this language in trying to communicate with the audience that has been given me.”

Merritt proclaimed, “Simply put, the Gospel that was dynamic enough to save him was too dangerous to share with others. Sadly, in far too many pulpits and platforms in our churches today, the spirit of Norman Vincent Peale is alive and well.”

Merritt set forth three points in underscoring the primacy of being unashamed of the Gospel.

Pastor Tony Evans of Dallas, Texas, Oak Cliff Bible offered insight into the chaos in the world with a solution through a passage from 2 Chron. 15:3-6. 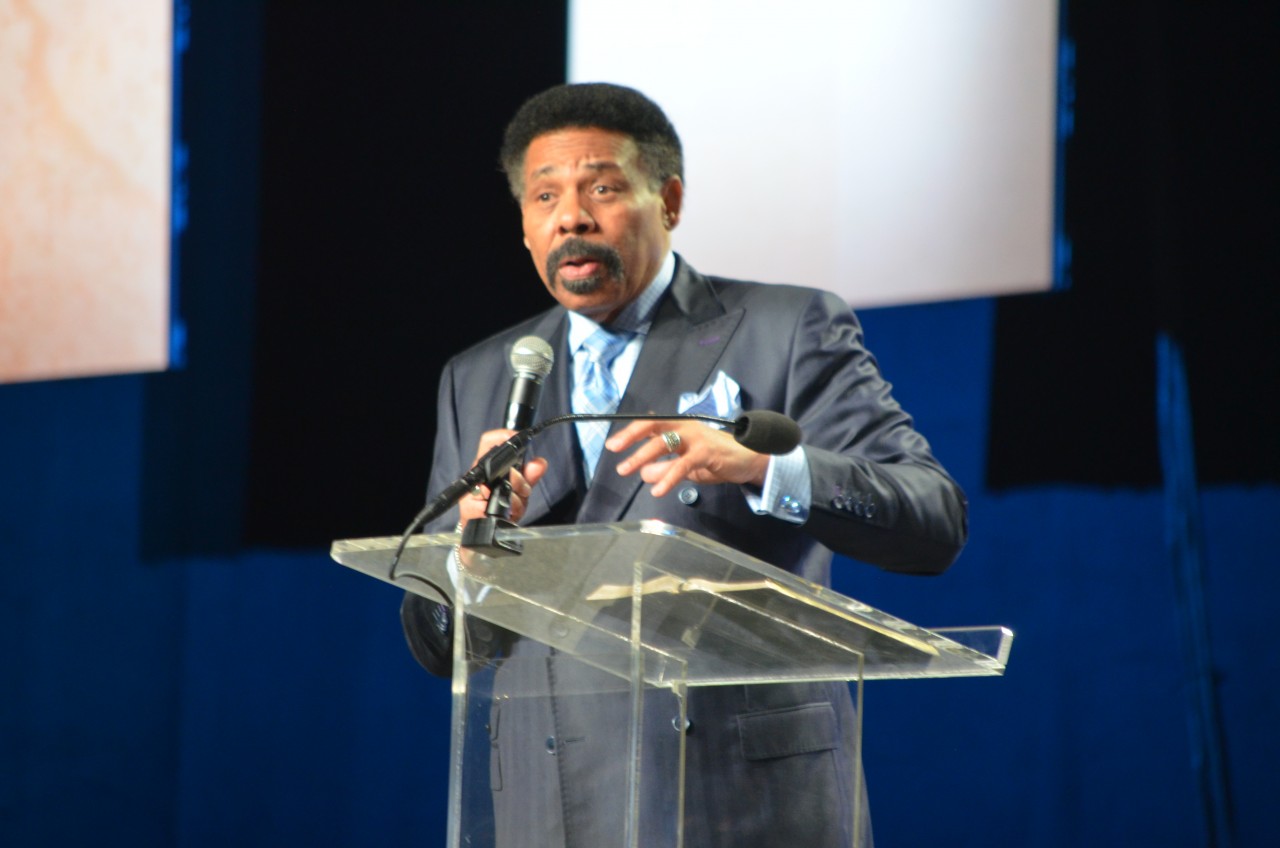 “God will cause distress to get our undivided attention and in order to do something new,” Evans said. “God determines what He is going to do in a society by the presence, or the absence, of the influence of His people.”

“Everybody wants God, they just want Him on sale,” he said. “As long as they can get God cheap, they’ll get all they can handle. But the moment He comes at full price, they’ll shop elsewhere.”

Evans referenced Matt. 16:17-19 to say that “only the church has been given the keys to the Kingdom.”

“God is more concerned about the church house than the White House,” Evans said. “Until the church is right, He won’t fix our society.”

Christians are called to seek after God, Evans said, and, as 2 Chronicles 15:4 states, “but when they turned to the Lord God of Israel in their distress and sought Him, He was found by them.”

Bryan Carter, pastor of Concord Church in Dallas, opened the Monday morning session by using “the truth of God’s Word to call us back to the calling and the assignment that sits upon the life of every proclaimer of the Gospel of Jesus Christ.”

Carter preached from Acts 9 on the calling of Saul. Focusing on verses 15-16, when God spoke to Ananias concerning His calling on Saul’s life, Carter reminded listeners that all believers have been chosen by God to be His instruments to carry His name and to suffer for His name.

Church planter Cameron Triggs of Orlando, Fla., Grace Alive, urged participants to pursue unity for the sake of the Gospel.

“We forget whose Kingdom we are called to,” Triggs said. Too often people claim what is done in the Kingdom is “because of us, while in actuality, it is in spite of us,” he said.

In Philippians 2:1-4, the apostle Paul calls the believer to a life of humility, love and unity, Triggs said.

Unity does not mean conformity or uniformity, he said, and allows for differences in races, gender, political views and opinions. “Neighbors are watching, the world is watching to see how we love one another and spread the message of Jesus Christ.”

Disunity among God’s people “deeply grieves God,” he said, destroying churches, people and relationships. “A backbiting Christian is the same as a backsliding Christian.”

Pursue unity, Triggs urged, as a means for showing off the Gospel. The Gospel gives the means for unity, which makes believers’ joy complete and allows them to take the Great Commission to a dying world.

Unity permits all brothers and sisters to sit at the same table, joining hands. Disunity causes us to fight for our own rights, he said.

Triggs reminded attendees that there are “2 billion people across the street and across the world wishing we would have held hands sooner.”

Concluding his sermon, Triggs called for the audience to hold hands across the aisles and pray for reconciliation.

Jack Graham, pastor of Dallas, Texas, Prestonwood, began the final Monday morning sermon by recalling his first opportunity to preach at the 1985 Pastors’ Conference in Dallas, an occasion he called an SBC “tipping point” with the Conservative Resurgence. 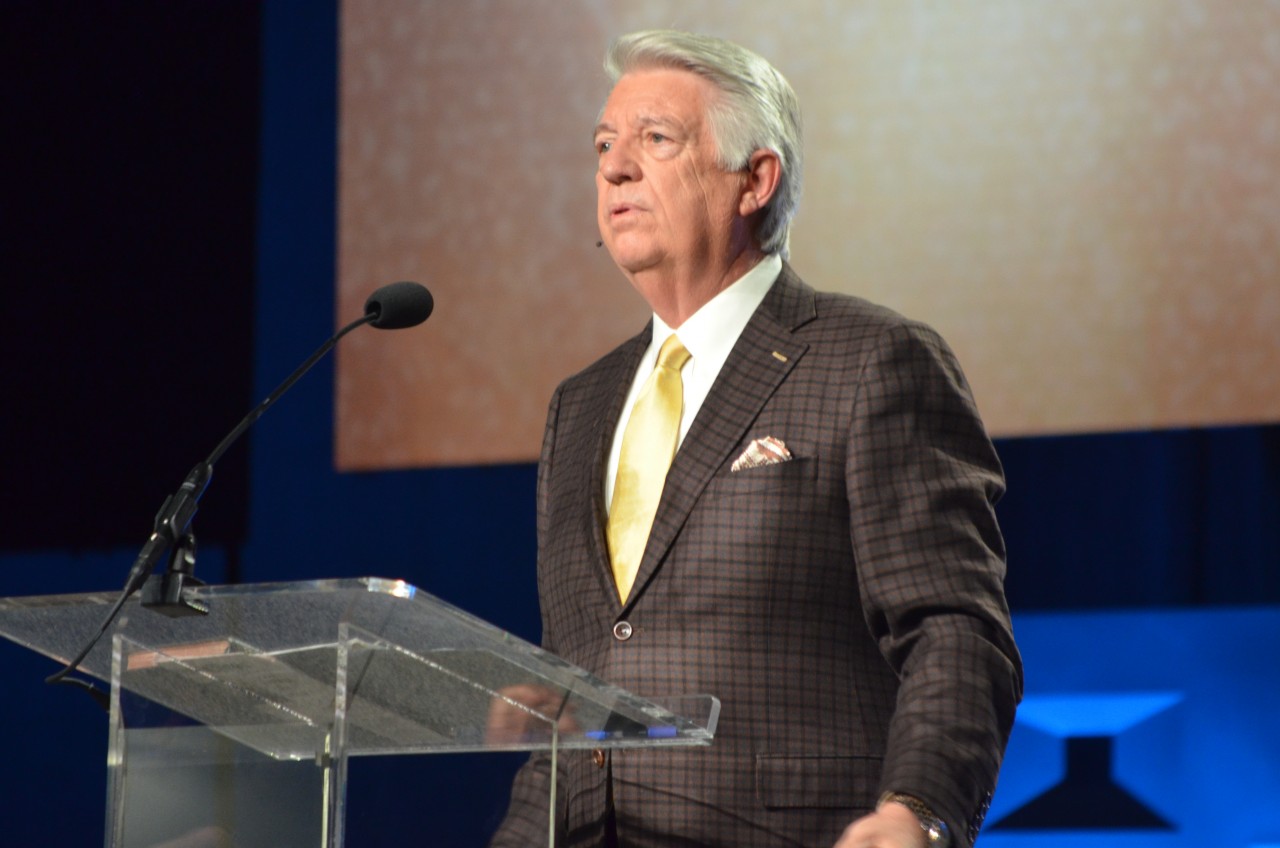 Affirming this conference’s theme to “Fulfill Your Ministry,” Graham displayed a Dallas Morning News edition with the headline “Cheers for hope in Christ,” regarding the June 10 Harvest America event at AT&T Stadium.

“We haven’t seen a lot of winning from the Cowboys lately, but we had some big wins last night as thousands of people came to faith in Jesus Christ,” Graham exclaimed to applause.

Turning to his topic of finishing well from 1 Cor. 15:58, Graham said yesterday marked his 29th anniversary at Prestonwood, adding that he had been in ministry for 48 years.

“You just keep showing up,” Graham said of the key to going the distance in ministry. “It’s not how you start but how you finish.”

Describing a recent conversation with retired SWBTS professor William Tolar, 90 and terminally ill, Graham said Tolar confirmed the importance of reliance on Christ, as the professor had since childhood. As a child, Tolar was challenged by a teacher to read “the world’s bestseller” and that has embodied his life.

From 1 Cor. 15:58, Graham appealed for unity and balance, urging the audience to “stay focused on Jesus,” avoiding “running after every fad, new trend, hip or cool thing to do.”

To pastors facing criticism, he counseled obedience to God. He also advocated “toil to the point of exhaustion,” remarking that “some people in ministry quit a long time ago.” Yet pastors are to be “always abounding” because the “stakes are too high not to work hard.” He added with a laugh, “I’ve been tired since 1979,” urging pastors to excellence.

Graham admitted his surprise at how quickly life passes, proclaiming, “It’s a blur,” affirming his plan never to retire entirely from God’s work.

“Keep overdoing it. Keep excelling,” he urged, reminding all of the ultimate legacy of heaven.

The three preachers for the final session of the SBC Pastors’ Conference were Daven Watkins, pastor of Pelham, Ala., First; Charlie Dates, pastor of Chicago, Ill., Progressive; and J.D. Greear, pastor of Raleigh-Durham, N.C., Summit.

More information about the 2018 SBC Pastors’ Conference will be provided later on baptistmessenger.com and in the latest edition of the Baptist Messenger.