SBC Pastors’ Conf. a call to character ‘from above’ 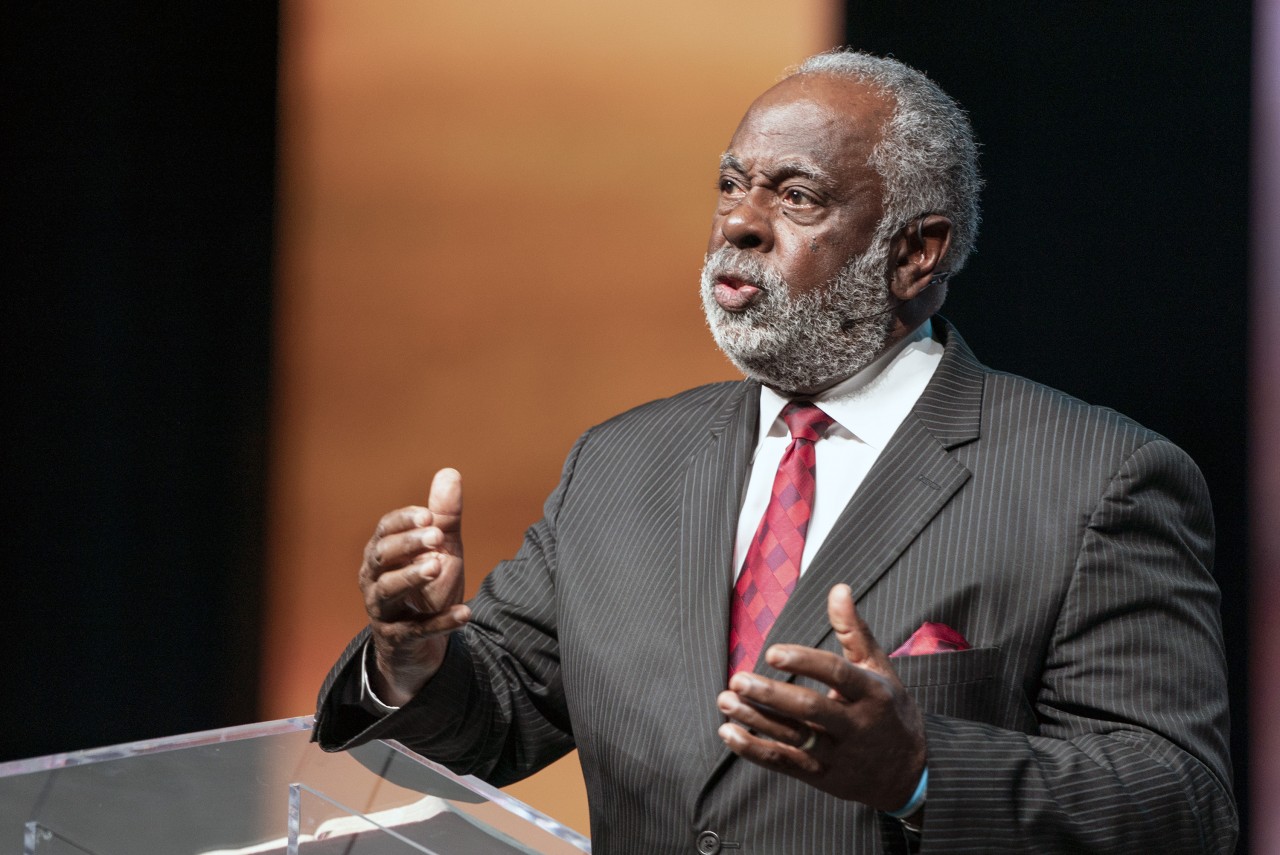 BIRMINGHAM (BP) — Whether in suffering or dealing with a social media firestorm, lean into the godly character that the Holy Spirit is fashioning in your heart — that was the core challenge of the first two sessions of the 2019 Southern Baptist Pastors’ Conference June 9-10 at the Birmingham-Jefferson Convention Complex in Birmingham, Ala.

The first seven speakers began working their way through the Beatitudes — found in Matthew 5:1-12 — challenging church leaders to live out the theme of “Kingdom Character.” 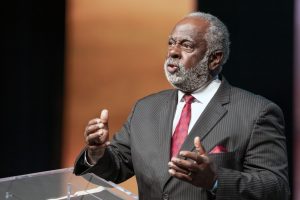 Robert Smith, Jr., the Charles T. Carter Baptist Chair in Divinity at Beeson Divinity School, gives an overview of the Beatitudes June 9 during the opening session of the two-day 2019 SBC Pastors’ Conference at the Birmingham-Jefferson Convention Complex in Birmingham, Ala.
Photo by Matt Miller

Robert Smith Jr. began session one by preaching an overview of the Beatitudes.

Smith, the Charles T. Carter Baptist Chair of Divinity at Samford University’s Beeson Divinity School in Birmingham, explained that the Beatitudes were paradoxical statements made by Jesus.

“A paradox occurs when two mutually exclusive statements meet at the intersection of apparent contradiction only to produce truth,” Smith said.

“The Holy Spirit is not a luxury, He is a necessity,” Smith said. “It’s like you can’t even be a Christian without the Spirit. God is working to develop from the inside what He has already put in you. In other words, you don’t have seven of these blessings, you have all nine of them. The question is not how much of the Spirit do you have, but how much of you does the Spirit have?” 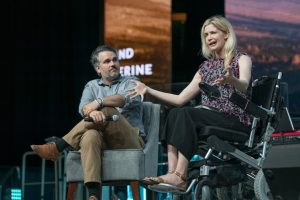 Jay Wolf and his wife, Katherine, speak on the beatitude Blessed are the poor in spirit during the 2019 SBC Pastor’s Conference June 9 at the Birmingham-Jefferson Convention Complex in Birmingham, Ala. The couple are evangelists and advocates for disabled people.
Photo by Matt Miller

Evangelists Jay and Katherine Wolf of Hope Heals in Atlanta displayed Christ’s power in suffering by telling how Katherine nearly died from a massive brain stem stroke at age 26. From a wheelchair on stage, Katherine, now severely disabled, said all people “have invisible wheelchairs of so many different kinds.”

“We’ve all been through various types of suffering — hard things, past trauma, pain, the sin that’s hurt us, how we’ve hurt others,” Katherine said during the Sunday night session.

“… We’re just a testament to the power of Jesus taking some really hard, bad suffering and using it. I want to encourage you to listen to us share with that perspective, seeing yourself in this story because it is in fact your story too,” she said. “The specifics may be different … but I guarantee you’ve had hard stuff in your story.”

Jay, whose father is the longtime pastor Jay Wolf at First Baptist Church in Montgomery, Ala., said the body of Christ “forever has changed our story and our life, and I know we wouldn’t be here today were it not for the church coming around us and uplifting our life and our story when everything fell apart.”

In the hours after the stroke, Katherine’s doctor did not expect her to live but decided to risk a lengthy surgery to give her a slight chance at survival. During that surgery, he had to make decisions about which parts of her would become disabled in order to sustain her life.

“In the wounding of Katherine came the healing of Katherine,” she said. “I think that is true in all of our stories. In our terrible woundings, a beautiful healing can come, and that is the Christian life.”

Katherine encouraged believers to accept that there is pain that is “lifelong that we will not understand or that will not be healed, taken away, until heaven.”

“We need to be OK with the tension that everything is not healed and restored on earth and that there is a tenor of sadness to things in life for sure, and that that’s OK, that God is absolutely present and at work even in the hard, sad things where there is ultimately such beauty,” Katherine said. 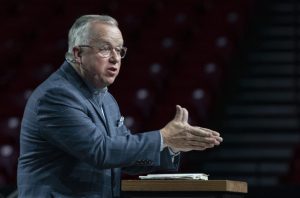 Ed Litton, pastor of Redemption Church in Mobile, Ala., preaches on the beatitude Blessed are those who mourn during the 2019 SBC Pastor’s Conference June 9 at the Birmingham-Jefferson Convention Complex in Birmingham, Ala. Litton and his wife both experienced the loss of previous spouses in car accidents. Photo by Matt Miller

When Ed Litton’s wife Tammy passed away in a tragic car accident in 2007, he wanted to “helicopter over” the Valley of the Shadow of Death and get through it as quickly as possible. But God invited him to walk through it instead, he told those present at the Sunday night session.

“When I was standing at the trailhead of the Valley of the Shadow of Death I was frightened; I was terribly afraid,” said Litton, pastor of Redemption Church, Mobile.

He asked, “Lord, how long is this going to take?” But God didn’t answer him, Litton said.

“The more I traveled with Him, I discovered He is utterly faithful to us,” he said. “He draws near to those who are brokenhearted and crushed in spirit.”

If you skip the walk, “the reality is you miss the beauty that is hidden in that dark trail of tears,” Litton said. “We miss the beauty and the God who says I will never leave you or forsake you.”

This “blessed condition” for those in grief and sorrow is “only possible because of the Lord Jesus Christ,” he said as he spoke on Matthew 5:4, “Blessed are those who mourn.” But mourning in the Beatitudes doesn’t just mean grief because of the loss of a loved one or an ability or ministry, he explained.

“There’s a hole in our repentance,” Litton said. “We tend not to mourn; we helicopter over it and go straight to (God’s) forgiveness.”

True godly sorrow in repentance is not a quick fix, he said — it’s a blacksmith in Christians’ hearts beating out the sin that keeps them from God, sins like racism and indifference toward their neighbors. It’s this kind of repentance that can truly bring revival, Litton said.

“We need to stop just saying we want revival, and we’ve got to start filling the hole in our repentance which brings what we long for,” he said. 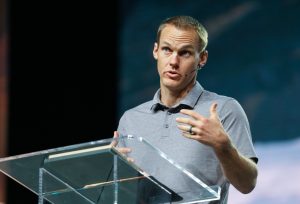 David Platt, pastor of McLean Bible Church near Washington, D.C., and founder of Radical, a resource ministry that serves churches, preaches during the second session of the two-day 2019 Pastors’ Conference held June 9-10 at the Birmingham-Jefferson Convention Complex.
Photo by Adam Covington

In a social media landscape that can drive people to jump to conclusions and stokes the fires of online outrage, Christians should heed the words of Jesus to pursue meekness, said David Platt as he kicked off the Monday morning session of the conference.

Platt, pastor-teacher of McLean Bible Church in Vienna, Va., spoke at the Pastors’ Conference only eight days removed from a public prayer for President Donald Trump during his church’s Sunday worship service. Platt’s prayer was the subject of much social media conversation. But more concerning for Platt was the divided response of his own congregation, he said.

Some members of Platt’s church were overjoyed about the president’s impromptu visit, Platt said, while others were hurt and discouraged. The church should be the place where believers can have different political opinions and remain unified in the Gospel, he said.

Preaching from the third Beatitude — “Blessed are the meek, for they will inherit the earth” (Matt. 5:5) — Platt said Christians should spend more time listening humbly in face-to-face conversations with fellow Christians instead of speaking boldly on the internet. In a politically polarized secular environment, Jesus’ teaching about meekness — something Platt called calmness and joy “from above” — is a powerful antidote.

“We live in a culture that entices us at every moment to speak our thoughts from behind a screen instead of looking in the eyes of our brother and sister in love and listening to them,” Platt said. “Let us not get caught up in this — where we jump to erroneous conclusions and ignore honest convictions of brothers and sisters in Christ who may have different views from us.” 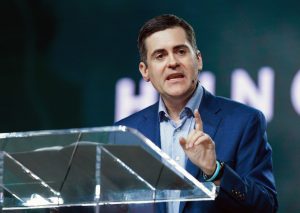 Russell Moore, president of the Southern Baptist Convention Ethics & Religious Liberty Commission, speaks during the second session of the two-day 2019 SBC Pastors’ Conference held June 9-10 at the Birmingham-Jefferson Convention Complex. He spoke about the beatitude Blessed are those who hunger and thirst for righteousness.
Photo by Adam Covington

God’s definition of blessing means a follower of Jesus “can be blessed and be hungering and thirsting at the same time,” Russell Moore told the Pastors’ Conference Monday morning.

Moore, president of the Southern Baptist Ethics & Religious Liberty Commission, spoke on Matthew 5:6 — “Blessed are those who hunger and thirst for righteousness, for they shall be satisfied.”

In this verse, Jesus says the ones who are blessed are blessed by God in a way that God defines it, Moore said — “not a life free of suffering, not a life that is free of carrying the cross but a life in which someone is in right relationship with a God who loves them and is for them and a God who is putting them in right relationship with one another, a God who has blessed them with the Gospel of Jesus Christ and a God who is enabling them to be a blessing to the nations.”

“The hungering that God creates is the hungering He also fills,” Moore said. “&#91;W&#93;hen we hunger and when we thirst for righteousness, what we inevitably say is: ‘God have mercy on me.’ We then are the people who recognize that we can only seek after righteousness when we understand and know that we are sinners in need of mercy.”

Followers of Jesus must set themselves apart for holiness, Moore said. 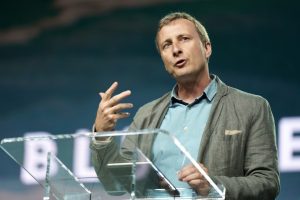 Martin Young, senior minister of Rising Brook Community Church in Staffordshire, England, speaks during the second session of the two-day 2019 Pastors’ Conference held June 9-10 at the Birmingham-Jefferson Convention Complex. He spoke on the beatitude Blessed are the merciful.
Photo by Adam Covington

Teaching on the Beatitude “blessed are the merciful” from Matthew 5:7 and pulling from 2 Kings 6:14-23, Young explained that believers should show mercy to the poor, to those different than them and to those closest to them.

“When we act mercifully, a flow begins because the kingdom of heaven is about flow. It’s an ecology…. the mercy that was extended to us extends to other people…. We find ourselves in a flow, and mercy then flows through our hearts to other people’s hearts. This is the secret of the Kingdom of Heaven,” he said.

The bottom line, according to Young, is that both the one offering mercy and the one receiving mercy gain from the act.

Young also encouraged attendees to be particularly full of mercy when dealing with others who think or act differently than they do.

Mercy addresses difference, Young said. These differences can be racial, social or theological. It can be really hard to love people who are different than us, he said, but when people show mercy in given situations, those acts can be lovely and beautiful.

Mercy can be our “most powerful weapon against anger, sin, resentment, competition, bitterness,” he said.

Young encouraged attendees to be on the lookout for the people around them in need of a merciful encounter.

“Mercy … is the flowing of the Holy Spirit pouring out of a merciful heart and pouring into a merciful heart,” he said. “Look for these moments … and let us overcome evil by doing good.”