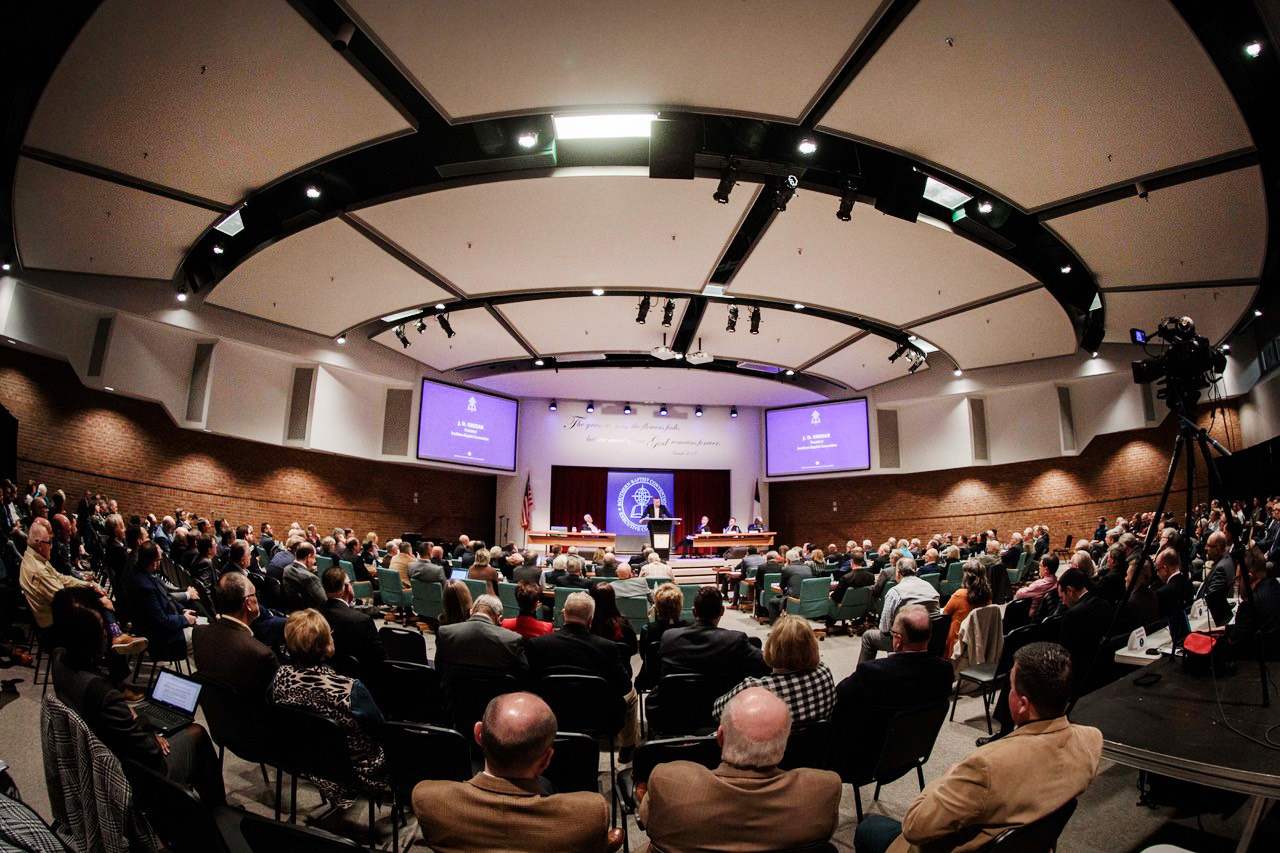 But in an enthusiastic sign of unity, the EC voted unanimously to forward to 2020 annual meeting messengers Vision 2025, an initiative focused on evangelism, missions and stewardship put forth by SBC EC President Ronnie Floyd; and heard a report from the SBC’s two mission boards regarding the joining of national and international compassion ministries under the umbrella of Send Relief.

In other business, the EC unanimously voted to forward to messengers recommended revisions to the EC mission and ministries statement, including a new prayer ministry; and unanimously voted to recommend the addition of a George Liele Church Planting, Evangelism and Missions Day to the SBC Calendar annually on the first Sunday in February beginning in 2021, approving a request initiated in 2019 by the SBC National African American Fellowship (NAAF).

While the EC meeting reflected differing perspectives on agenda items, mirroring discussions across the Convention, Floyd commended the EC for a spirit of unity cemented by the Gospel.

“I think we need to remember… the unity we have about the Word of God being the absolute authority and source in our lives and in our Convention, as well as the mission of God, and that is that God wants us to touch every person with the Gospel, and to make disciples of all the nations,” Floyd said Tuesday, Feb. 18 following the meeting. “Those two things are the rock-solid matters of who we are… Everything will not be perfect, but hopefully we are growing in our maturity in handling those disagreements and those challenges along the way, in a godly manner.”

Floyd compared the SBC to a family that encounters disagreements.

“Obviously, our convention, from time to time, goes through challenges, and we have been in a season of some of those challenges being personified a little more demonstrably than at other times in our history,” Floyd said. “At the same time, you would have never sensed at all last night (in the Feb. 17 EC plenary), if you had been in the building, any division… because the one thing that always unites us is missions and evangelism, which we emphasized last night through Vision 2025.”

If SBC messengers adopt the initiative in June, Floyd said, “it will become our five-year vision that will hopefully be so strong, that if we have disagreement along the way about various matters, we don’t stay down there very long. And hopefully we can always unite with what really we’re all about.”

The EC voted to allocate meeting space for the 2020 SBC Pastors’ Conference provided president David Uth amends the program by Feb. 24. The recommendation, which originated in the EC Business and Finance Committee, did not note specific program changes needed, but the speaker lineup and the choice of musical guests have generated both disapproval and applause among Southern Baptists.

Orlando, Fla., First, pastored by Uth, pledged Monday, Feb. 17 to cover the full cost of the 2020 Pastors’ Conference. But the EC instead voted to continue the arrangement where the conference reimburses the EC for a portion of the cost. EC chairman Mike Stone said his desire is for changes to be made to the program, “so we can proceed in keeping with who we are as Southern Baptists.”

As recommended by the SBC Credentials Committee, the EC voted to disfellowship Midland, Texas, Ranchland Heights, whose senior pastor Phillip Rutledge is a registered sex offender.

Rutledge, who began pastoring the church in June 2016, was convicted in 2003 of aggravated sexual assault against two girls, ages 11 and 12, respectively.

The church is the first disfellowshipped since messengers to the 2019 SBC Annual Meeting revised the function of the Credentials Committee, allowing it to receive reports of a church’s suspected departure from Southern Baptist polity, doctrine or practice and to make recommendations to the SBC Executive Committee regarding the possible disfellowship of churches from the SBC.

Ranchland Heights last reported 75 members and an average church attendance of 60 in 2017, but reported no Cooperative Program giving.

The study group is charged with fact-finding, EC Chairman Mike Stone said, and was not formed with the intention of recommending ERLC personnel changes.

“We are clear that the ERLC as well as the other entities are governed by their board of trustees; this is not a governance issue,” Stone said. Rather, the Cooperative Program Committee brought the issue to the EC plenary as a budget-related issue. The EC has heard reports, perhaps anecdotal, Stone said, that churches are withholding CP allocations “related to concerns with the Ethics & Religious Liberty Commission.”

The task force was instructed to submit its findings at or before the EC’s September 2020 meeting.

Under Vision 2025, Southern Baptists would work to add 500 fulltime International Mission Board missionaries by 2025, add 6,000 new Southern Baptist churches, encourage those called to ministry to engage in their calling; reverse a decline in baptism and discipleship among 12- to 17-year-olds, and surpass $500 million in Cooperative Program giving.

“Both entities working together will make it easier for Southern Baptists to get involved in meeting needs so that lives can be changed through the power of the Gospel,” Ezell said. “I’m excited about how this will multiply Southern Baptist compassion ministry efforts and build a simple on-ramp for pastors and churches who want to be involved in the great work Southern Baptists are doing in North America and around the world.”

SendRelief.org will provide a giving portal for both entities, the leaders said.

Also, the EC voted unanimously to forward to messengers amendments to the EC mission and ministry statements as Floyd requested, updating the language and adding a seventh ministry assignment: prayer.

As approved, the EC would “assist churches through elevating the ministry of prayer,” with an express goal of providing “strategic leadership to lift up and promote coordinated prayer for spiritual awakening, ministry effectiveness, and the completion of the Great Commission.”

“Updating the language of the SBC Executive Committee’s ministry assignments and the explanation of them is important as we seek to better serve Southern Baptist churches,” Floyd has said. “Furthermore, the addition of a ministry assignment for prayer will enable the EC to provide strategic leadership for prayer in the SBC.”

The EC voted to recommend to messengers in Orlando the addition of a George Liele Church Planting, Evangelism and Missions Day to the SBC Calendar annually on the first Sunday in February beginning in 2021, approving a request initiated in 2019 by the SBC National African American Fellowship (NAAF) honoring Liele as the first Baptist missionary abroad.

“If I use a basketball term, he was a triple threat, an evangelist, a missionary, and church planter. All done under extremely difficult circumstances,” Ausberry said. “If George Liele had a basketball jersey I think we would all be wearing it. He rightfully stands along with the missionary giants (Adonirum) Judson and (William) Carey.”

Robert Anderson, who made the motion at the 2019 SBC Annual Meeting in Birmingham to add the calendar date, also affirmed the EC vote.

“The Bible tells us to give honor to whom honor is due (Rom. 12:7), and thus, recognizing the Rev. George Liele, is very compelling historically because it corrects the popular notion that Adoniram Judson or William Carey were the first international missionaries from America,” Anderson said. “Rev. Liele preceded both of them to the foreign field to preach the Gospel, help the hurting, and start new churches.”

In other business, the EC:

—Proposed a revision to the EC committee and workgroup structure;

—Amended the SBC Bylaws and Constitution regarding the process of elections and timing of business at the annual meeting, and