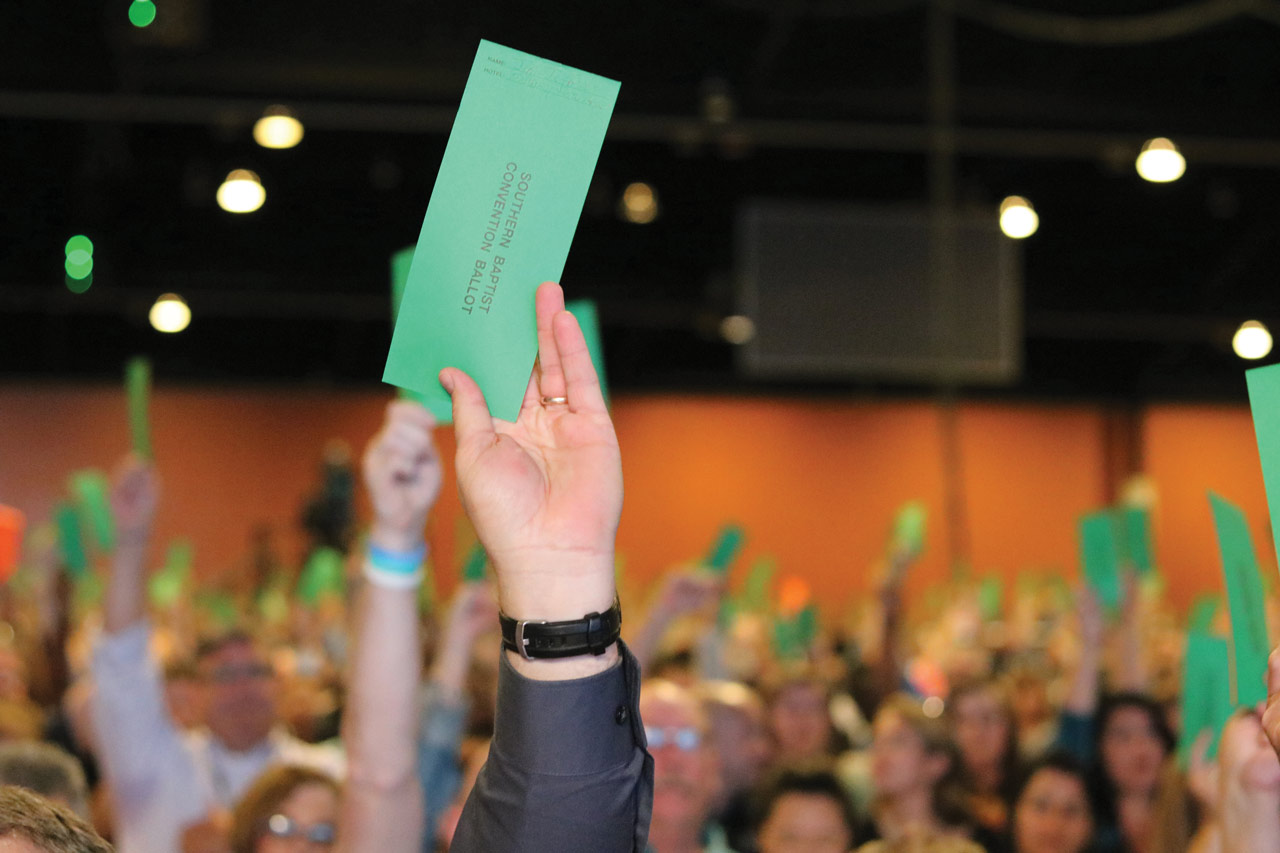 PHOENIX (BP)—Messengers to the 2017 Southern Baptist Convention annual meeting denounced “alt-right white supremacy” in a nearly unanimous vote Wednesday (June 14) after a tumultuous day of refusing to address the issue.

It appeared maybe fewer than 10 messengers in the Phoenix Convention Center hall voted in the afternoon session against a resolution on “the anti-gospel of alt-right white supremacy.” The “alt-right,” a movement that advocates white nationalism, has gained increasing attention in the last 18 months.

The action came after a wave of protests on social media from black and white Southern Baptists and other evangelical Christians greeted the failure Tuesday of the Resolutions Committee and Messengers to bring an “alt-right” resolution to the floor.

The Resolutions Committee asked Tuesday evening for an opportunity to bring such a resolution to the convention Wednesday, and the Committee on Order of Business and Messengers approved its request.

In the resolution they approved Wednesday, messengers said they:

—Decry every form of racism, including alt-right white supremacy, as antithetical to the Gospel of Jesus Christ;

—Denounce and repudiate white supremacy and every form of racial and ethnic hatred as a scheme of the devil intended to bring suffering and division to our society;

—Acknowledge that we still must make progress in rooting out any remaining forms of intentional or unintentional racism in our midst;

—Earnestly pray, both for those who advocate racist ideologies and those who are thereby deceived, that they may see their error through the light of the Gospel, repent of these hatreds, and come to know the peace and love of Christ through redeemed fellowship in the Kingdom of God, which is established from every nation, tribe, people, and language.”

After the vote, most Messengers stood to applaud the result.

Dwight McKissic, the African-American pastor who submitted the original resolution on the “alt-right,” expressed gratitude for approval of the final version after the Resolutions Committee and Messengers failed to bring his proposal to the floor Tuesday.

“I’m grateful that things have ended up like they have, I think, for the kingdom of God’s sake,” McKissic told reporters after the vote. “I think we’re back to a good place after a 24-hour roller coaster ride.”

The pastor of Arlington, Texas, Cornerstone said he was “very pleased” that the final resolution—which was markedly different from his version—addressed the “alt-right” and white supremacy. “I think we’re unified around that,” he said.

McKissic found himself begging many black pastors not to leave after Tuesday’s inaction, he told reporters. He thinks “this convention still has a future,” McKissic said, while acknowledging much work remains to be done. “I think (Southern Baptists) want to get it right.”

In bringing the resolution to messengers Wednesday, Resolutions Committee Chairman Barrett Duke apologized to the convention on behalf of the panel.

“We regret and apologize for the pain and the confusion that we created for you and a watching world when we decided not to report out a resolution on alt-right racism,” he said. “Please know it wasn’t because we don’t share your abhorrence of racism and especially, particularly the vicious form of racism that has manifested itself in the alt-right movement. We do share your abhorrence.”

Messengers approved nine other resolutions they received from the committee with unanimous or nearly unanimous votes. In those resolutions, they:

—Confessed as sin any lack of prayer and called on Southern Baptists to commit to at least 15 minutes a day of prayer and regular fasting as they are able, as well as petitions to God to grant revival and the salvation of millions of people.

—Expressed gratitude for leaders who live consistently moral lives, urged all leaders to abide by God’s moral standards and pledged prayer for the country’s leaders to resist temptation.

—Reaffirmed the doctrine of penal substitutionary atonement—which says Jesus took upon Himself in His death the divine punishment due sinners—“as the burning core of the Gospel message and the only hope of a fallen race.”

—Denounced Planned Parenthood’s “immoral agenda and practices,” in addition to urging all government defunding and commending the Ethics & Religious Liberty Commission (ERLC) for making federal removal of money for the country’s leading abortion provider a priority in its legislative agenda.

—Urged Southern Baptists to pray for and invest in evangelism and discipleship efforts with college students and strengthen the relationship between parachurch campus ministries and local churches.

—Voiced gratitude to God on the 500th anniversary of the Protestant Reformation for its courageous leaders and urged recommitment to its convictions while advocating for religious liberty for all.

—Offered thanks on the 100th anniversary of the SBC Executive Committee and commended the entity for its promotion of the Cooperative Program, the convention’s unified giving plan.

—Expressed gratitude to God, as well as Southern Baptists in the Phoenix area and all others who helped with this year’s meeting.