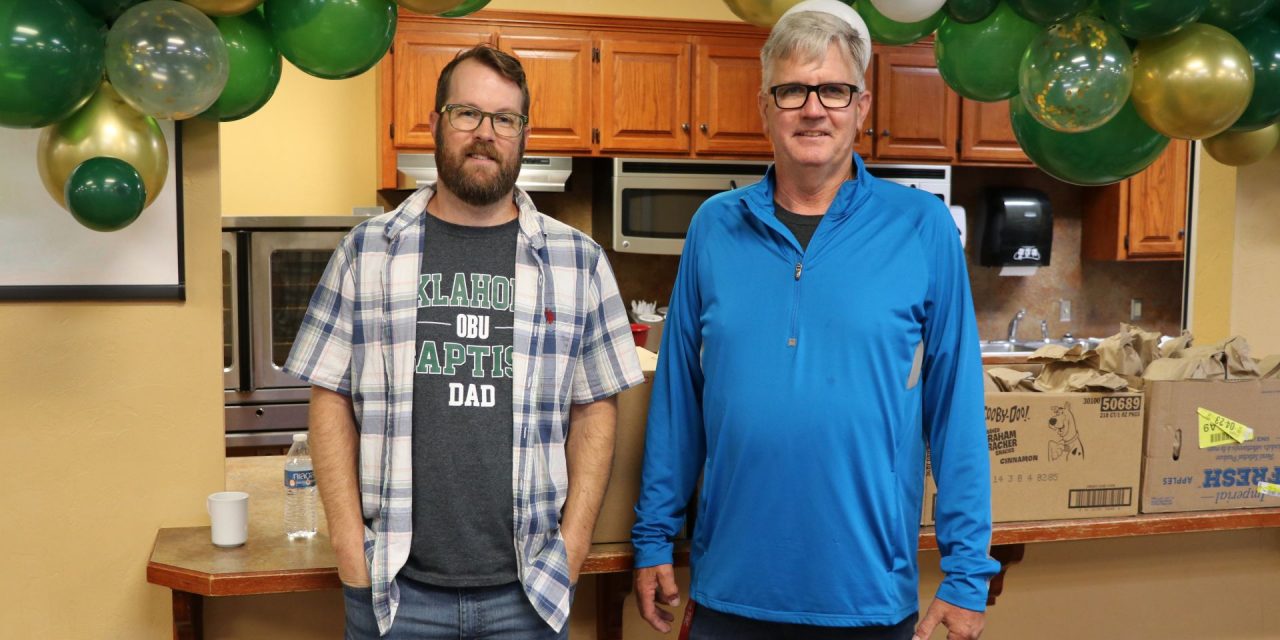 Above: Nick Atyia and Terry Howard share how they appreciate Disaster Relief serving in Seminole.

SEMINOLE—Nick Atyia remembers vividly the events that happened on May 4. As pastor of Seminole, First, he started that day discussing with church staff if they should cancel church events that Wednesday evening.

Seminole, First eventually cancelled events. Looking back at that decision, Atyia was thankful. “Boy were we glad we cancelled church,” he said.

Strong severe storms moved across much of Oklahoma that evening. Atyia received multiple text messages from concerned friends who were watching reports of storms heading to Seminole.

“We crammed about 14 people into our storm cellar,” he said. “I closed the door, and it did get a little bit loud at our house, but I didn’t think much of it until the weather broke just enough for us to come out.”

Then text messages came from church members and other Seminole friends. Atyia received messages like “It went right over our house” and “Downtown is destroyed.”

Atyia and his two teenaged boys got in his truck and went to the main area of downtown Seminole.

“Power lines were down everywhere, structural damage and debris everywhere,” he said. “We went out to check on some church members we knew their houses were hit, but it was really hard to navigate Seminole at that time. It was still light outside; the sun had not gone down yet, but there were powerlines down on almost every road.”

About an hour later, warnings of another tornado occurred. This time it was coming to the north side of town, where Atyia lives.

“(The second tornado) does dissipate as it comes into Seminole and picks back up as it got north of Seminole, and so some other people had some damage to their properties,” Atyia said.

Whoever in Seminole did not lose power after the first tornado was affected after the second one, as the whole area was without power until late afternoon the next day.

On Thursday, May 5, Oklahoma Baptist Disaster Relief (DR) was in Seminole helping those affected by the tornadic activity.

“They (DR) were the first of any organization to arrive in Seminole,” Atyia said. “By 2 p.m. they were up and running—meeting needs, getting food planned together for that night. In fact, at 9:30 on Thursday morning, there was already the Disaster Relief chainsaw team working in town. They were here working in the rain. The response was very quick.”

Atyia was impressed with the graciousness displayed by the DR team members. “These DR people are some of the most fantastic people that God’s ever graced the earth with,” he said. “Their graciousness and lovingkindness that they’d pour out on, first and foremost, the local churches and second to the community—there’s a humility there as well as a spiritual competence.”

“When it comes to feeding people, chaplaincy, chainsaw teams, they are able to say ‘Yes’ to everyone because they’re organized in a way where they can say ‘Yes’ to everyone and to all the needs,” he said. “The years of experience and the provision of the Lord with the ministry of Disaster Relief really was a tremendous benefit and blessing to this community.”

Terry Howard is the outreach minister at Seminole, First who oversees The Bridge, the church’s multi-purpose activities facility. This is where DR set up its command center with Dan Fuller from Medicine Park serving as the DR “White Cap” leader.

“With Disaster Relief and Dan Fuller, it’s a well-oiled machine that I wasn’t expecting,” Howard said. “It was great to work with people who are organized and know what they’re doing. It was incredible the way that they worked.”

Howard said more than 300 Oklahoma Baptists came to serve with DR over a period of nine days following the tornado strike in Seminole.

DR reported one person they served made a profession of faith in Christ. Atyia said there were two spiritual decisions made as a result of DR serving in Seminole.

The response did not stop in Seminole, though. A few days after the storm, Atyia went to Shawnee to get supplies for his chainsaw. When the store manager found out Atyia was working with DR, he offered the supplies free of charge because DR helped his mother-in-law, who lives in Seminole, clear debris from her house.

There were reports of Bar-S Foods providing hot dogs and deli meats as well as a multitude of water bottles donated to help DR make meals. Both Atyia and Howard confirmed how much the Seminole community appreciated the service of DR.

“My biggest takeaway from having Disaster Relief in a situation like we had—in spite of all the negative news—at the core of who we are, this is a testimony of what makes Baptists a real spiritual family,” he said. “Our partnership in ministry and the Gospel meets the needs of people. That’s what I love about being a Baptist.”

For more information about Oklahoma Baptist Disaster Relief or to make a donation, visit okdisasterhelp.org.