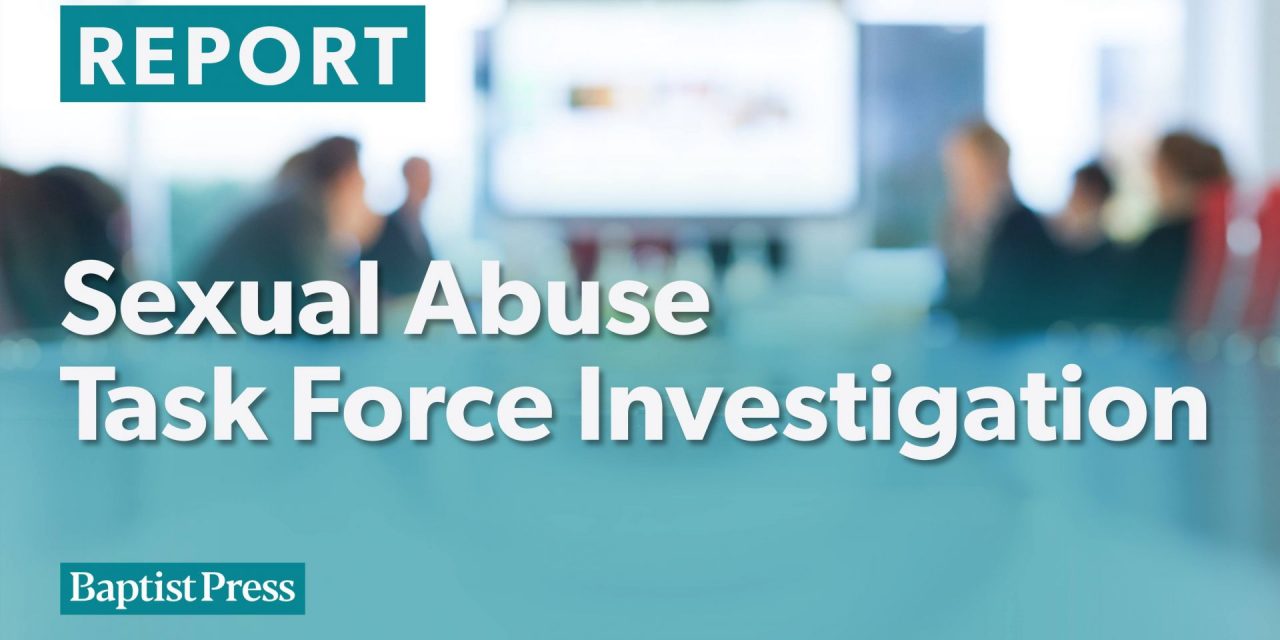 NASHVILLE, Tenn. (BP)—A report issued Wednesday, June 1, from the Sexual Abuse Task Force (SATF) includes “challenges” for Southern Baptist groups toward better abuse prevention policies as well as two recommendations, including the formation of a website to maintain a record of those credibly accused or convicted of sexual abuse.

Those challenges included the request for a $3 million allocation to fund the implementation of sexual abuse reforms over the next year. That allocation will come from Cooperative Program overages as well as a portion of the Vision 2025 budget and through an Executive Committee recommendation to messengers in Anaheim.

The SATF is scheduled to deliver its report at 1:45 during the Tuesday, June 14, afternoon session of the SBC annual meeting in Anaheim.

A recommendation requiring approval by messengers concerns the creation of a “Ministry Check” website for the purpose of “maintaining a record of pastors, denominational workers, ministry employees, and volunteers who have at any time been credibly accused of sexual abuse.”

Inquiries into the database would focus on individuals, not a church.

“Statistics show that sexual offenders have an 80 percent recidivism rate,” the report said. “One of the problems in our churches is the ability of abusers to move from one church to another to perpetuate their abuse. This often happens because churches don’t have the means to communicate with one another.”

Names in the database would consist of those with a conviction or civil judgment against them for sexual abuse as well as those that an independent firm determines have been credibly accused of abuse. The sexual abuse allocation is available to cover the cost of an independent firm if a church or other Baptist group is unable or unwilling to do so.

Another recommendation proposes the creation of an Abuse Reform Implementation Task Force (ARITF), which would operate on a three-year term and provide reports at the 2023, 2024 and 2025 annual meetings. ARITF members and leadership would be appointed by the Southern Baptist Convention (SBC) president and, though funded by the aforementioned allocation, “shall operate with full independence.”

The ARITF would study the feasibility of Guidepost’s recommendations, including establishing a survivor care fund and memorial, and report on those findings at next year’s annual meeting in New Orleans. The group would also study the possible creation of a permanent committee and assist SBC entities in implementing the recommendations within the context of their ministry assignment. State conventions and other “Baptist bodies” could request the ARITF provide the names of independent firms for training.

An independent firm selected by the Credentials Committee and ARITF would establish and maintain the database website, which will be funded by the sexual abuse allocation requested by the Executive Committee.

The SATF’s recommendations further addressed the development of the Credentials Committee, which was repurposed in 2019 to address claims of churches being out of fellowship with the SBC due to areas such as sexual abuse but has struggled to find its footing in that role.

A request came from the SATF for the Executive Committee to assist and “evaluate staffing needs” for the Credentials Committee in addition to hiring staff or an independent contractor “to receive reports of abuse for the purpose of determining the appropriate church, entity, or association to respond to those allegations.”

The ARITF would work alongside the Credentials Committee in revising the evaluation and submission process for churches appearing to be out of friendly cooperation with the SBC. It would further assist the EC and Credentials Committee to select an independent firm or firms in those investigations.

The series of challenges for entities and other Baptist bodies also recommended training in sexual abuse prevention and survivor care for entity boards and standing committees, denominational workers, volunteers and students.

In addition, the SATF requested that the Committee on Nominations complete background checks for trustees appointed to entity boards and standing committees. Churches and other groups are encouraged to participate in the SBC sexual abuse assessment.

Other best practices for state conventions include maintaining a list of trauma-informed Christian counselors, establishing a self-certification program for churches in abuse prevention and survivor care as well as adjusting staff orientation to include abuse prevention training and background checks.

Baptist Press reached out to SATF Chairman Bruce Frank and Executive Committee Chairman Rolland Slade for comment, with both declining to do so at this time. The SATF’s full list of recommendations can be found here.