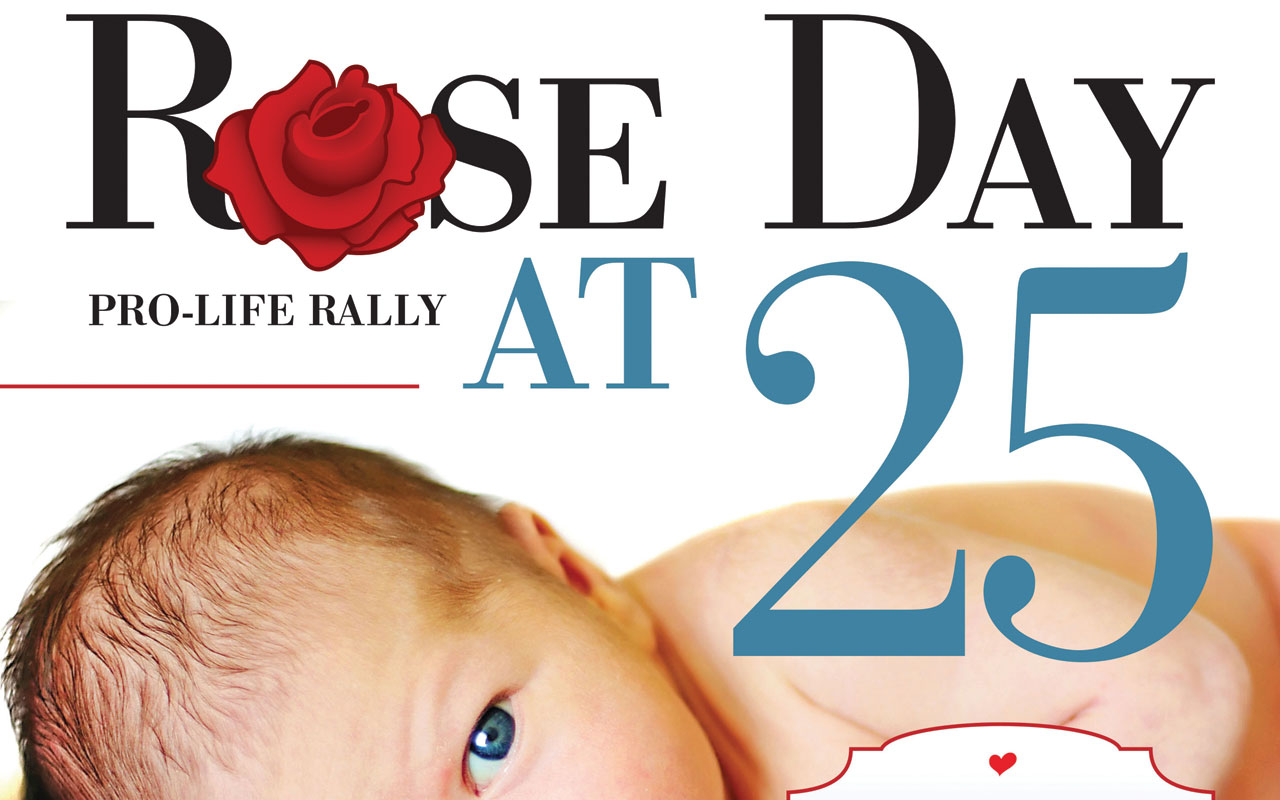 Oklahoma has been declared the “number-one” state on Americans United for Life’s “Life List.” This recognition by the nation’s oldest pro-life organization is based upon how well Oklahoma protects life in law. The achievement can be attributed to the many years Oklahomans have encouraged state government leaders to support pro-life legislation, including the 25 years Oklahoma Baptists have been supporting Rose Day.

Each year, hundreds gather at the Capitol at the beginning of the new legislative session to promote and support the lives of unborn babies by meeting with their state senators and representatives and presenting them red roses, which represent the sanctity of the unborn. Attendees are encouraged to present roses to their representative, senator, Lieutenant Governor and Governor. Roses will not be provided.

Rose Day will begin with rose distribution from 9:30-11:30 a.m. on Wed., Feb. 3. To commemorate the 25 years Oklahoma Baptists have participated with Rose Day, Anthony Jordan, executive director-treasurer of the Baptist General Convention of Oklahoma, will give this year’s keynote address at the pro-life rally, beginning at 11:45 in the House chamber.

“I have been involved since 1985 with the pro-life movement here in Oklahoma,” Jordan said. “We started having small groups meeting on the steps of the Capitol. Then in 1990 we had a Rally for Life that had thousands upon thousands. In fact, Connie Chung on CBS News said 20,000 people were there. People with the Capitol said it was the largest gathering ever in the history of Capitol.”

Though the 1990 rally appeared to be a great success on that Sunday afternoon, Jordan noticed a different result when he met with some key legislators after the event.

“They acted like (the Rally for Life) had never happened,” said Jordan. “The impact of it was to rally Oklahoma pro-lifers, but it didn’t make any difference in the Legislature.”

Jordan said he and other Oklahoma Baptist leaders tried to figure out how to have a greater impact.

“We began investigating how we could do something different,” he said. “Two sweet Catholic ladies for several years had been going to the Capitol handing out roses, so we talked with them, and we ended up joining them with Rose Day. It’s an opportunity to be inside the building, interfacing with the legislators and with our executive branch leaders and to press on them our absolute determination that the unborn has the right to life.”

And the rest is history. Jordan said they have seen the crowd “grow and grow and grow” every year on Rose Day. “We not only fill up the House chamber and the galleries, but we also have to send (rally attendees) over to the Senate chamber. It is a tremendous opportunity for pro-lifers to be able to go to our legislators, look them in the eye, and tell them of their commitment to the unborn and call on our legislators to protect the unborn in Oklahoma.”

Rose Day has had a major impact with many Oklahomans in the past 25 years, not just with Baptists and Catholics, as different Christian denominations have been represented at the annual rally. Jordan emphasizes the significance of the recognition of senators and representatives who attend the Rose Day rally.

“I think it’s important that people understand that Rose Day is not just a time to come and rally and shout and say we are pro-life,” Jordan said. “It is an opportunity to allow the legislators to stand up and put them on record as being pro-life.  Then, when pro-life bills come up, we are able to come back to them and say, ‘You know, you were at Rose Day. You stood up and said you were committed to the life of the unborn.’ Rose Day gives us the opportunity to be able to press for legislation that will make a difference.”

In his address, Jordan plans to encourage pro-life supporters to continue championing the cause.

“We must be vigilant,” he said. “You can never give up. The enemy is in opposition, always seeking to take us out of the public arena, to shut us up. So we can’t. We must be a voice for the voiceless. I have committed as long as the Lord gives me life and breath I will speak for the unborn, and there are others who have made that same commitment. It’s imperative we not lose our energy.”

Jordan also emphasizes other concerns that threaten the pro-life movement, including the judicial system.

“I think of the challenges that we face in regard to many of these pro-life bills that have been passed that get to our Supreme Court, and they are killed by our Supreme Court here in Oklahoma,” Jordan said. “I think judicial reform is a very important part of looking at the future. We need judges who rule from law and not simply from their own imagination and don’t create laws. They are not legislators. That’s to be done in the legislature.”

Another concern is how abortion can be possible through pharmaceutical drugs.

“We are at a point in the pro-life movement where the battle is going to move from the clinic to the pharmacy,” said Jordan. “The way you win there is you have to win in the public arena and in the minds and hearts of young people. We have to show them.

“It’s so clear that when a young person goes to one of our hope pregnancy centers, they do an ultrasound, a sonogram. The fact of the matter is nearly 98 percent of those who see that unborn child in their womb choose to give life. We have to win in the public arena. We have to help people understand this is a child.”

Jordan and other Oklahoma Baptist leaders hope this year’s Rose Day will have a great turnout, but more importantly, they hope for the ultimate success in the pro-life battle.

2003 – Jill Stanek pro-life activist; nurse who lost her job for her pro-life stance