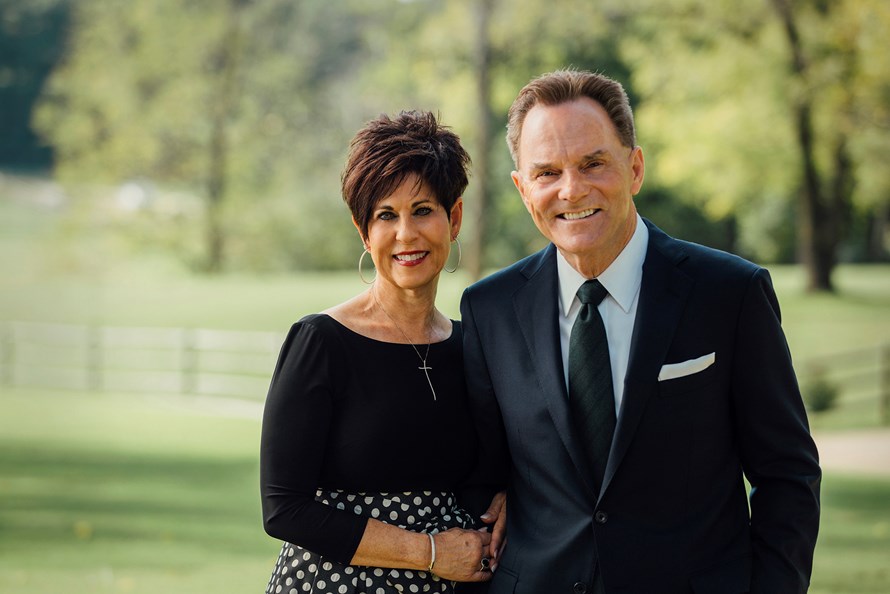 DALLAS (BP) — Ronnie Floyd is the new president and CEO of the Southern Baptist Convention’s Executive Committee, elected today (April 2) by ballot vote in a called meeting in Dallas.

A former SBC president, Floyd will announce his resignation April 7 as pastor of Cross Church in northwest Arkansas in accepting the EC position, he told his congregation March 31 in preparation for today’s vote.

“As an ambassador for Christ, the Gospel and our Southern Baptist Convention,” Floyd said in a video now posted on YouTube, “this role provides influence for the Lord and His Gospel message in all kinds of ways and in all kinds of places, nationally and globally.” 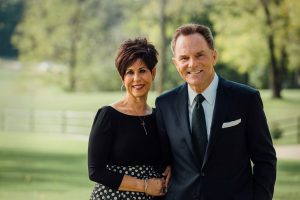 Ronnie Floyd, nominated as president of the SBC Executive Committee, and his wife Jeana of 42 years have two sons and seven grandchildren.
BP File photo

“The thought of parting from you has been gut-wrenching for Jeana and me. Words cannot describe it,” Floyd told his congregation. “The sense of loss is undeniable. But the sense of calling at this point is greater.”

“This is a crucial moment for Southern Baptists, and I am excited to work alongside Ronnie Floyd as he leads the Executive Committee forward,” Greear told BP. “Pastor Ronnie has had a lifetime of leading in the kinds of evangelism and sending we are promoting in the Who’s Your One? and Go2 initiatives, both on the local church and national convention levels.

“He is a man of prayer and a man of action; a man of prudence and man of boldness,” said Greear, pastor of The Summit Church in the Raleigh-Durham, N.C., area. “He is a gifted leader who I believe will keep the Gospel above all.”

Floyd, married to Jeana 42 years, is widely endorsed by Southern Baptist leaders including entity presidents, state convention executives, a diversity of pastors and others as well as the Woman’s Missionary Union.

“Impeccable integrity,” “visionary leader,” “prayer warrior” and “a role model in the pursuit of inclusiveness” are traits noted among endorsements offered in advance of the vote.

Floyd is in his 33rd year as the pastor of Cross Church, which celebrates its sesquicentennial in 2020. Under Floyd’s leadership, the multisite congregation has planted 148 churches and baptized more than 22,000 people, according to a press kit distributed by the SBC Executive Committee in advance of today’s vote. Cross Church reached $1 million in annual giving to the SBC Cooperative Program in 2015 and has since exceeded that amount annually.

Floyd has been active in various arenas of Southern Baptist life and interdenominational ministry. He has served as president of the National Day of Prayer Task Force since 2017 and is a member of the board of directors of the Family Research Council in Washington.

Floyd has 43 years of pastoral experience dating back to First Baptist Church in Cherokee, Texas, in 1976 and subsequently including congregations in Milford, Palacios and Nederland, Texas. He began leading Cross Church in 1986 when the congregation was known as First Baptist Church of Springdale, Ark., and expanded the ministry to include campuses in Pinacle Hills, Rogers and Fayetteville as well as a campus in Neosho, Mo. Weekly Sunday attendance encompasses more than 9,000 people in 11 worship services across the various Cross Church campuses, according to the SBC Annual Church Profile.

Floyd is the author of more than 20 books and host and lead speaker of The Summit businesspersons’ luncheon of northwest Arkansas, equipping more than 400 business leaders each week.

— Southeastern Baptist Theological Seminary President Danny L. Akin: “Ronnie Floyd is one of the most gifted and effective leaders I know. … He is tireless, focused, wise, and visionary. He also is a man of impeccable integrity. I believe he is the right man to lead the Executive Committee of the Southern Baptist Convention in these challenging days that face our Convention.”

— Midwestern Baptist Theological Seminary President Jason K. Allen: “The best way to determine how a person will lead in the future is to review how they have led in the past. As SBC president, Dr. Floyd pursued denominational unity by reaching out across generational, theological, and ethnic lines; he pursued denominational renewal by focusing on spiritual awakening, personal evangelism, and fulfilling the Great Commission; and he pursued denominational expansion by championing the Cooperative Program. I’m confident Dr. Floyd will do the same in this new leadership post, and I’m more hopeful for the SBC’s future with him at the helm of the Executive Committee.”

— International Mission Board President Paul Chitwood: “Ronnie Floyd, twice elected SBC president, believes in and supports the work of Southern Baptists. He has led his church to become the top Cooperative Program giving church in the Arkansas Baptist State Convention and one of the top CP and Lottie Moon Christmas Offering churches in the SBC. Dr. Floyd is a visionary Great Commission leader and passionate prayer warrior who loves the local church, works to build unity in our Convention, and models and promotes racial reconciliation. God has answered our prayers for the search committee.”

— North American Mission Board President Kevin Ezell: “Ronnie Floyd is a visionary leader who is wholly devoted to advancing God’s Kingdom. His heart for prayer and spiritual awakening will help keep Southern Baptists focused on reaching our world for Christ. I believe Ronnie is just what we need as we walk through times that are challenging yet filled with opportunity.”

— Southwestern Baptist Theological Seminary President Adam W. Greenway: “Dr. Ronnie Floyd is a visionary leader with an extensive track record of denominational involvement and Great Commission passion. I am personally excited that this two-time Southwestern Seminary alumnus has been nominated to become the seventh president of the Executive Committee of the Southern Baptist Convention. I pray that God will use this friend to me and all Southern Baptists to help forge greater unity and cooperation in our task of connecting all people to Jesus Christ.”

— GuideStone Financial Resources President O.S. Hawkins: “We are thrilled to hear that Ronnie Floyd is unanimously being recommended for election to the Executive Committee. We have known Ronnie and Jeana for decades and cannot think of one without the other. Southern Baptists are blessed to have this God-honoring, vision-casting, servant-hearted couple leading our SBC into a new day of unparalleled potential and cooperation.”

— Gateway Seminary President Jeff Iorg: “Dr. Ronnie Floyd is a passionate visionary leader who believes in the mission of the Southern Baptist Convention. He has a track record of denominational engagement among Southern Baptists and effective leadership in the larger evangelical community. His authentic spirituality, coupled with his demonstrated commitment to inclusive leadership, makes him an ideal president for the Executive Committee. I look forward to working with him in this new role.”

— New Orleans Baptist Theological Seminary Chancellor Chuck Kelley: “Vision, skill, passion, and a relentless focus on the Great Commission. Dr. Ronnie Floyd is all this and so much more. As Southern Baptists face many challenges, including the greatest evangelistic crisis in their history, they will be well served with an outstanding leader at the helm of the Executive Committee.”

— Southern Baptist Theological Seminary President R. Albert Mohler Jr.: “Ronnie Floyd is one of the most dynamic leaders in the Southern Baptist Convention. There is no pastor in the SBC today who has more experience in denominational life and leadership. He is deeply committed to the SBC and is passionate to see Southern Baptists reach a lost world for Christ. His commitment to the Cooperative Program is clear and he leads by example. I look forward to working with Ronnie Floyd as he assumes this new position of great importance to our Convention and its work. I am thankful to God for him.”

— Ethics & Religious Liberty Commission President Russell Moore: “I wish to extend my congratulations to Ronnie and Jeana Floyd, and to the Executive Committee as they begin this new ministry. Ronnie Floyd has my prayers and my pledge to work together to advance the causes of our churches and the message of the Gospel. The potential of our Southern Baptist churches, united in common cause and mission, is great indeed. I believe the very best days of the Southern Baptist Convention are yet to be seen, and I look forward to years of partnership toward that goal.”

— LifeWay Christian Resources Acting President Brad Waggoner: “Ronnie Floyd has been a faithful partner of LifeWay Christian Resources throughout his ministry. We are grateful that God has chosen him to lead the Executive Committee of the Southern Baptist Convention for such a time as this. A strong supporter of the Cooperative Program with a proven track record of effective leadership in the local church, Ronnie Floyd is uniquely gifted to unify and lead our Convention of churches in this crucial time.”

Sandy Wisdom-Martin, executive director-treasurer of the Woman’s Missionary Union auxiliary of the SBC, also welcomed Floyd’s nomination in comments preceding the vote. “We are at a critical hinge in history. We need people who will lead us on an unshakable pursuit of God and His mission,” Wisdom-Martin said. “We will pray for Dr. Floyd as he transitions to this new Kingdom post and look forward to working with him.”

In a series of Zoom conferences and conference calls scheduled today and April 3, Floyd will hear the concerns of Southern Baptists leaders encompassing bivocational and small-church pastors; the Great Commission Council of SBC entity and WMU of which Floyd will be a member; the Large Church Roundtable; the Mega-Metro pastors fellowship; the EC’s Convention Advancement Advisory Council; ethnic fellowship leaders; state convention executives and state convention presidents; and young leaders. More than 400 individuals have been invited to participate, according to Roger S. “Sing” Oldham, EC vice president for convention communications and relations.