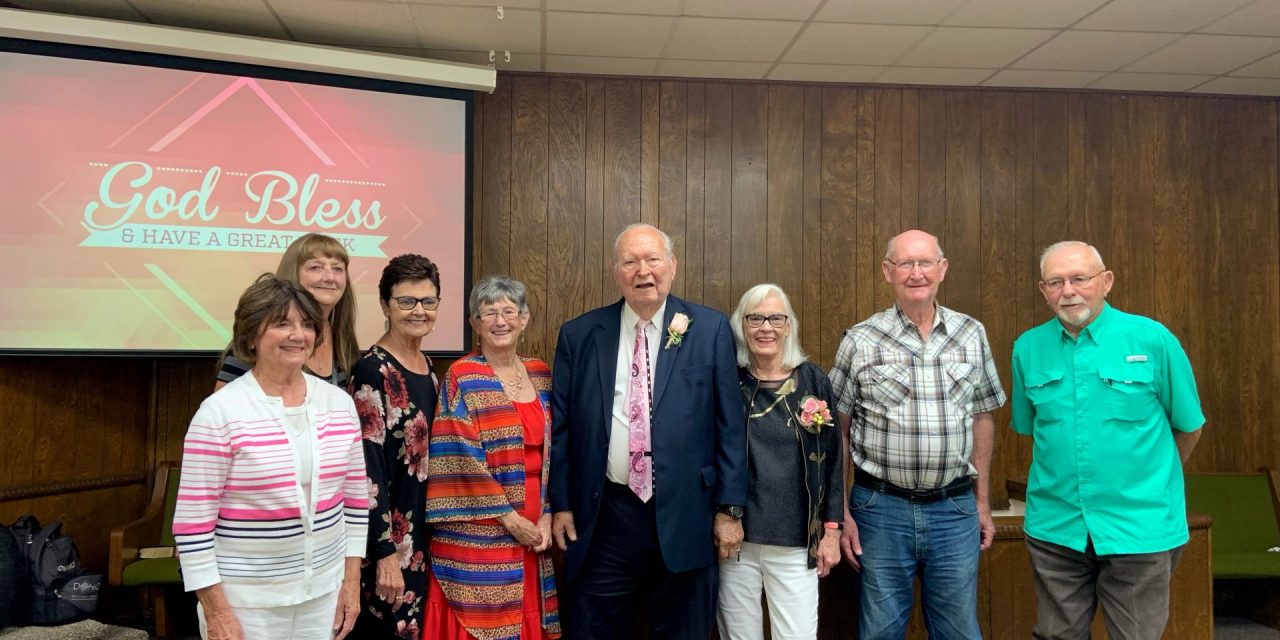 Above, Arbuary Ritter, center, is joined by his wife and faithful members of Randlett, Union Valley. The members pictured were children when Ritter started his pastorate at Union Valley in 1958.

COOKIETOWN—Arbuary Ritter, who has been the pastor of the same church in southwest Oklahoma for 60 years, announced his retirement this month.

Ritter, pastor of Randlett, Union Valley near Cookietown, is reported to hold the longest recorded pastoral tenure among Oklahoma Baptists and the Southern Baptist Convention (SBC). 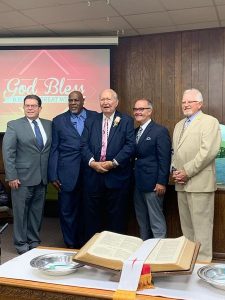 On Sunday, Aug. 22, a special retirement service and reception was held for Ritter. In attendance were Ritter’s family, as well as leaders from Comanche-Cotton Association, area churches and the state convention.

Walter Wilson, pastor of Lawton, Friendship, preached the service and later described the occasion as “a great evening with some great men for a great man.”

Troy Taylor, director of missions in Comanche-Cotton, said, “Today was Arbuary and Jane Ritter’s celebration at Union Valley Baptist Church. Arbuary has pastored here for 60 years. The longest serving pastor at one church in the entire SBC. The church did an outstanding job honoring their pastor and wife. It was an awesome day. Thank you Jesus!”

James Swain, who serves Oklahoma Baptists as associate executive director of church relations, also was in attendance and offered his appreciation for Ritter.

“What an honor to be a part of the celebration of the longest tenured pastor in Oklahoma and Southern Baptist life,” Swain said. “His tenure is a testimony to him and his wife Jane’s faithfulness and the graciousness of the Union Valley church family.  He demonstrated the shepherding leadership of 1 Peter 5:3 by not lording over the flock but being an example to them.  He is definitely worthy of the honor received, and I am praying for God’s richest blessing on him in the days to come.”

In a story published by the Baptist Messenger in 2018, Ritter talked about God’s faithfulness during his ministry service. Both he and the church have stood the test of time.

“There is absolutely nothing in town but the church anymore,” Ritter said when asked about Cookietown.

Ritter grew up in Marlow, attending Marlow, Eastside as a young boy, and at 15, he made a profession of faith in Christ. Ritter said it wasn’t long before he felt the Lord calling him to preach, so he told the pastor at Eastside.

“He told me, ‘Okay you’re surrendering to preach, you get to preach next Sunday,’ and that’s when I started,” Ritter said with a laugh.

As a high school student, Ritter pastored his first congregation at Denton in Mullins Association from 1955-57. He was ordained in that time, on March 29, 1956. One unique thing Ritter remembers of his time as a preacher in high school was preaching his own senior class’ Baccalaureate service.

“It was an honor to be asked to do that because it was proof that my classmates noticed, since I gave my life to Christ, I had been living for the Lord,” Ritter said.

Ritter then spent a few years preaching at Pernell in Arbuckle Association, and then served at a church in Geronimo, preaching for the first time at Union Valley, from 1958-60.

In this time Ritter got married, had children and graduated from the University of Oklahoma. Ritter has done many things vocationally in his life, while he filled the pulpit.

He was a teacher in Texas, and eventually a school superintendent in Belleview, Texas. “It was 66 miles from Cookietown, and I drove it every day,” Ritter recalled. He also served as a police chaplain for the Oklahoma Highway Patrol.

After Ritter finished his master’s degree, he accepted the position as superintendent of Big Pasture Public Schools, and many Big Pasture students attend church in Cookietown today. He has lived and worked in that community for 58 years now.

“The Lord has blessed us, and we have expanded and grown, even though almost no one lives in Cookietown anymore,” Ritter said.

Just a few years back, Union Valley finished construction on a new youth building and has future plans to build an additional basketball pavilion, all signs that “the little church that could” continues to thrive. The church continues to attend Falls Creek youth camp and other ministries.

Ritter said the church serves a meal each Wednesday night, when people gather and fellowship.

The question many may have when hearing about the life story of Ritter is, “How?” How does a pastor stay at a small-town church for 60 years, when such churches often seem to be a revolving door of pastors? 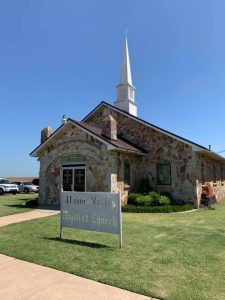 Randlett, Union Valley, near Cookietown, faithfully serves its community and continues to thrive.

The congregation at Union Valley is not made up of only farmers or ranchers like one might assume of rural church. Ritter said there are teachers, engineers, a pharmacist, government workers and more who come from surrounding areas to Union Valley to worship as a body of believers.

“The Lord has just blessed us,” Ritter said when asked what his secret is. “You follow the leadership of the Lord and don’t run off on your own. I’m grateful to have had the opportunity to serve here full-time, part-time and bi-vocational through the years. I’ve never felt the Lord calling me anywhere else.”

When asked what piece of advice he would offer to a preacher just beginning their journey of serving the Lord he said, “The biggest blessing comes from being at the church where God wants you (to serve). It doesn’t necessarily have to be the biggest church. I was going to be an evangelist, but instead God permitted me to be a pastor, and a lot more responsibility comes with that.”

Ritter, who is turning 83 in October, said he has done many things and learned many things throughout his life as a preacher, police chaplain, school superintendent among many other vocations.

But most of all, Ritter said being in ministry is not about you, or what you can accomplish on your own. “Don’t aspire to greatness or think ‘I need to go to a bigger, better church,’” he said. “Just follow where He leads, and He will make your path straight.”

Those driving south of Lawton, nearing the Oklahoma-Texas border on a Sunday or Wednesday are welcome to stop at Union Valley for a small taste of what keeps this faithful body of believers and Pastor Ritter coming back to Cookietown year after year.

Ritter offered some advice to guest travelers, though. “Don’t blink or you might miss it!”

At this retirement milestone, it is evident that God is at work in this corner of Oklahoma through one man’s years of faithful service, even as He is at work across the globe.