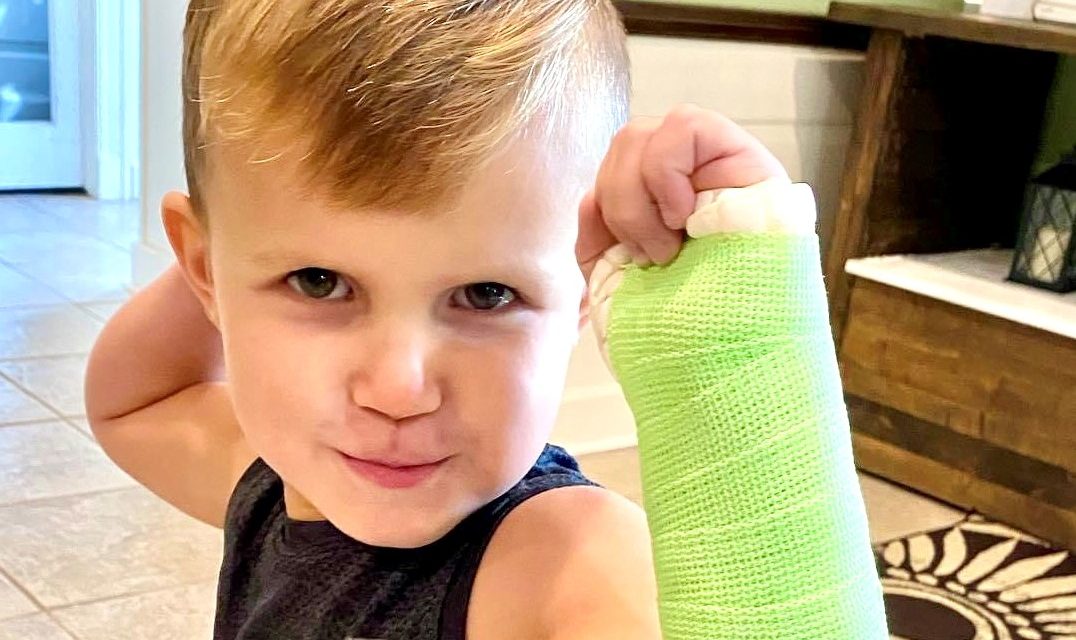 Above: Cohen the Goodhearted showing off his strength, even with a broken arm

You never know how your kids are going to do when you send them off to their first day of school. The first day of kindergarten will often cast your child’s position until they graduate. That child could be cast in the role as the smart one, the pretty one, the athletic one, the class clown or the troubled one. Most of these are roles children assume early in life. They learn to play those parts, not knowing they can change any time they want.

When my two grandsons went off for their first day of school, I was excited because this was a rite of passage in their lives. It was the starting line of marching into adulthood, and it gave their mom a break for a few hours.

I never worried about Titus the Honorable at school; he has a curious spirit and wants to know about everything, everyone and everywhere. Five-year-old Cohen the Goodhearted, on the other hand, has always been the muscle man of the little group. If he were born in Old Testament times, he could have given Samson a run for his money. He has always been physically strong and will dominate any game that has to do with strength. When he went off to his first day of school, I thought we would receive reports of him using his strength to wrestle all the other kids to the ground.

I don’t know if you ever watched “The Andy Griffith Show” on television, but they had an actor named Jim Nabors who played Gomer, a backward, goofy gas station attendant with a good heart. Gomer became famous for such catch phrases as “Shazam!” and “Gollleee,” but his most famous was when he shook his head and said with a Southern drawl, “Surprise, surprise, surprise!”

When the reports from the teacher started to come in on Cohen the Goodhearted, they said he was an “excellent student,” “paid attention” and was “a role model in his class.” All I could hear in my head was Gomer Pyle saying, “Surprise, surprise, surprise!”

I asked Cohen, “How was your first week at school?”

“There are some kids in the class who didn’t listen to the teacher,” he told me. “If you want to do good, you must listen to your teacher.”

His teacher was out this last week, and they had a substitute. Adrian, Cohen’s mother, got a text from the substitute teacher. He had been chosen to come up and write an example on the whiteboard for his class. As he got to the front of the room, he turned around and addressed his fellow students.

What a great speech you gave to your class. I have heard your dad and mom teaching you that principle when you were younger. Mostly it had to do with food: “You get what you get; don’t throw a fit.” But you took that nugget of wisdom and applied it to your class. What a great message you shared with them. I am not sure what prompted a 5-year-old to share those words of wisdom, but you saw an opportunity to speak into others, and you took it.

Cohen, you have a choice in how you live your life. Every day, ask God to use you to show the world what Jesus looks like. Acts 10:38 tells us that Jesus went about doing good. It has also been your nature to do good. Just last year, you went out on your own and collected candy for Halloween, only to turn around and pass it out to other children, not keeping a single piece for yourself.

When you were born, I felt led to give you a title, “Cohen the Goodhearted.” Your parents gave you the first name “Cohen,” which means “priest” in Hebrew. But I also wanted to give you a character trait in which to grow. This week you walked out your title. I encourage you to continue to grow strong in your body, but may you also continue to grow stronger in your character.

It’s your Poppy’s prayer that the name Cohen will always be associated with goodness, graciousness and acts of kindness. In doing that, you will reflect the life of Jesus to a world that needs to see a flesh-and-bone example of Him.

Love you, Cohen the Goodhearted,