Above: Walker ministering in a new church in the jungle of Panama

I don’t why or when I started doing this. I don’t even think about it. I have always signed my emails, letters and other correspondence by writing, “Your Servant, Walker Moore.” Some have remarked that my letter closing is odd. Some have said I am not their servant. 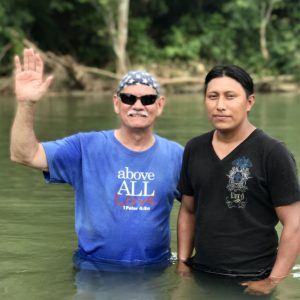 Walker baptizing in the jungle of Panama.

My attraction to our “servant Jesus” is what launched this ministry, and it still sustains me. Until the day he was crucified and became Savior, Jesus had walked a different life. He walked as the servant Jesus. In Philippians 2, we learn that Jesus came in the form of a bondservant. John 13 reminds us that Jesus set the example of servanthood by washing the disciples’ feet. In Luke 22:7, He says, “Yet I am among you as the One who serves.” And finally, Jesus tells us his mission was to do one thing: serve. “For even the Son of Man did not come to be served, but to serve, and to give His life a ransom for many.” Mark 10:45

I was thinking what would a letter to me from Jesus look like? Would He begin by bringing up my sins—all the bad things I have done? Would He reprimand me that I haven’t been faithful in giving, or sharing the good news? Would He treat me like a dog and say, “Bad boy”? I really can’t say what Jesus would write or say, but I do know what He has done.

Do you remember that Peter cut off a man’s ear in an attempt to protect Jesus? And remember that Peter denied being one of the disciples—denied it three times? Do you remember that an angel instructed the women visiting Jesus’s tomb to send Peter back to the tomb? Do you remember in John 21, when Peter was fishing; he rowed his boat to the shore, and Jesus was waiting for him? I believe Peter’s guilt was controlling every step. As Jesus began talking to him, Peter likely waited for Jesus to confront him with a long list of shortcomings.

Jesus didn’t do that. Instead, He talked to Peter not about his sins, but his service. He kept telling him to get back to work and take care of the flock. He kept asking Peter several times, “Peter, do you love me?” Peter reminded himself that he had once told Jesus he loved Him more than life. And now Jesus is asking Peter to what degree does he love.

Peter no longer could profusely declare that he loved Jesus more than anything else. Peter basically said, “Jesus, I like you a lot. I have walked alongside of you for a number of years. We have shared many meals, but when you needed me the most, I dropped the ball.” Jesus replied, “If you just like me, that’s good enough. Now get back to work.”

One of my favorite verses is Acts 2:14: “But Peter, taking his stand with the 11, raised his voice and declared to them…” Peter got back to work, stood with the other 11, and became the first disciple to preach the Gospel under the power of the Holy Spirit; and more than 3,000 people responded to the love and grace of God.

If you are like me, you struggle with sin. If you asked me when do we stop struggling with sin, I would have to tell you it’s sometime after 70. But praise God, do you know why he did not address Peter’s sins that day on the seashore? You just had to look at his hands. The nail scars were a reminder that Peter’s sins were washed away, buried as the far as the east is from the west, forgiven. Jesus told Peter to get busy serving, and Peter did.

I am a modern-day Peter. And a letter from Jesus to me might say something like this:

I love you; do you love me? If you do, get busy serving others in my name. Walk the life I walked. I have already shown you how, and you will be blessed. You are my favorite child.

Your servant,
Jesus of Nazareth

And my response would be this:

I do love you; I am getting back to work!