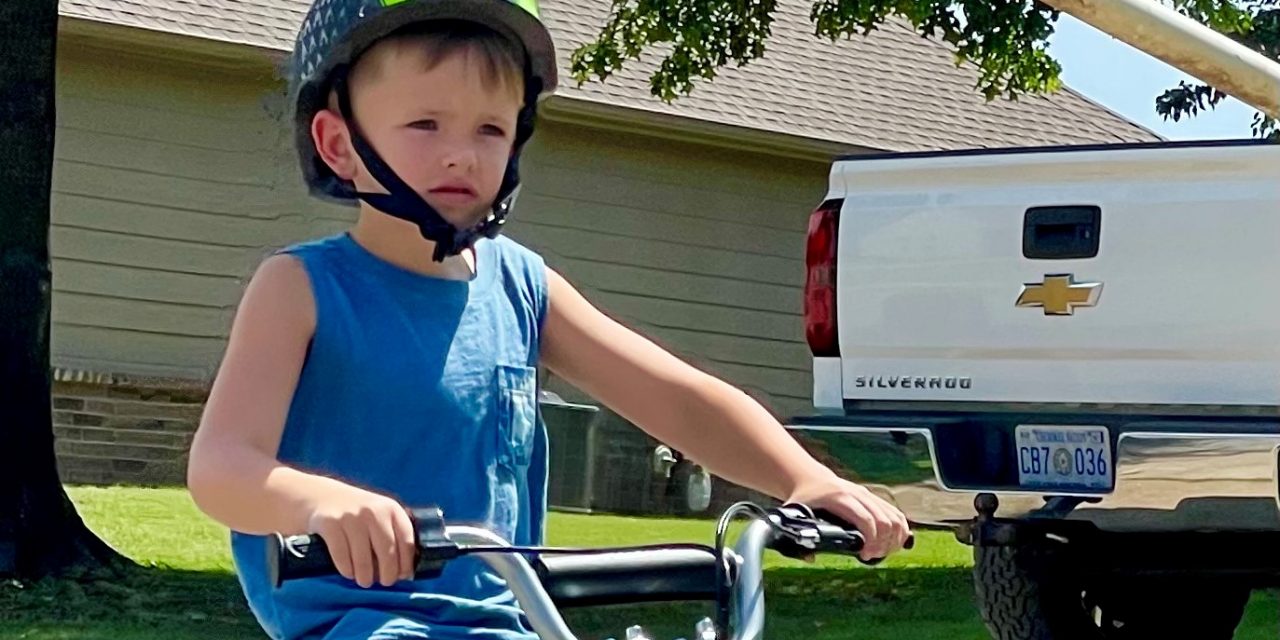 Several years ago, Titus the Honorable asked his dad for a mini dirt bike for his birthday. Since he was only 6 years old, his father said, “That is a lot of money, and we don’t spend that much on birthday gifts. But if you want one, work hard, save your money, and if you save enough to pay half the cost, Mom and I will cover the rest.”

Titus started saving his money: Christmas money, birthday money, money he earned by raking leaves and doing extra chores for the neighbors. Little by little, his savings grew. Along came his seventh birthday, and he still didn’t have enough. But this past Saturday, he turned 8.

He talked to his dad beforehand, asking if he had enough money saved up. “It will be close,” his dad told him. His dad began looking high and low for a dirt bike that would meet the qualifications, so Titus could pay half. Finally, he found a small blue electric dirt bike that would be safe for a boy Titus’ age. He bought it and took it to a local motorcycle shop, telling the owner what he wanted to do.

The next day on the way to our house to drop off Cohen the Goodhearted for a sleepover, Caleb said, “Titus, I have been looking everywhere trying to find a dirt bike for you, and it has been difficult.”

Titus’ little heart sank a notch lower, knowing he was going to have to wait another year and save more money.

“How about we stop by that motorcycle shop near Grammy’s house and see what they have?” Caleb asked.

Titus agreed to go with his dad to look at one more shop. The showroom was filled with rows and rows of beautiful, gleaming motorcycles. They started at one end. Titus would ask the price of a motorcycle, and the owner would tell him it cost thousands of dollars, too much for his small budget.

One by one, Titus looked at each motorcycle and asked the cost. With each answer, his hopes and dreams scooted further away.

Finally, they came to the last one, a beautiful blue mini dirt bike. Titus’ favorite color is blue, and the bike was just his size. After sitting on it to try it out, he asked one more time, “Sir, how much is this one?”

Caleb turned to the owner and told him how much money Titus had saved. If what Titus had was enough to pay for half, he would pitch in and pay for the rest. 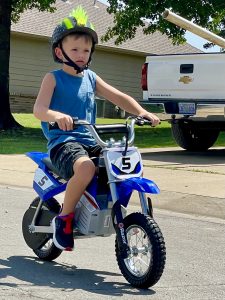 Titus on his Birthday mini bike

The owner rubbed his chin and told Titus, “Your dad drives a hard bargain, but I will sell you this bike for the cash you have in your pocket.”

You have never seen a kid so overwhelmed by what had just happened. He stood there, grinning, at a loss for words. The owner took Titus into his office and told him he needed to fill out a bill of sale and title. There in that office, Titus made his first adult purchase.

Titus’ parents wisely used his desire for a mini bike to teach him patience, a work ethic and money management. Titus doesn’t know it yet, but his father also taught him something about our heavenly Father: Our Father has already purchased for us everything we need in life.

Isn’t that like our heavenly Father? Through His Son, He has already purchased everything we need, and by faith alone, we can take possession of all His gifts. The good news is you can’t work, save up or purchase these gifts. God gives them freely because He first loved us.

I often tell my son he is a good father, but our heavenly Father is 10,000 times better than any earthly one.

P.S. If you see a blue streak going by, it is Titus the Honorable on his new mini dirt bike.