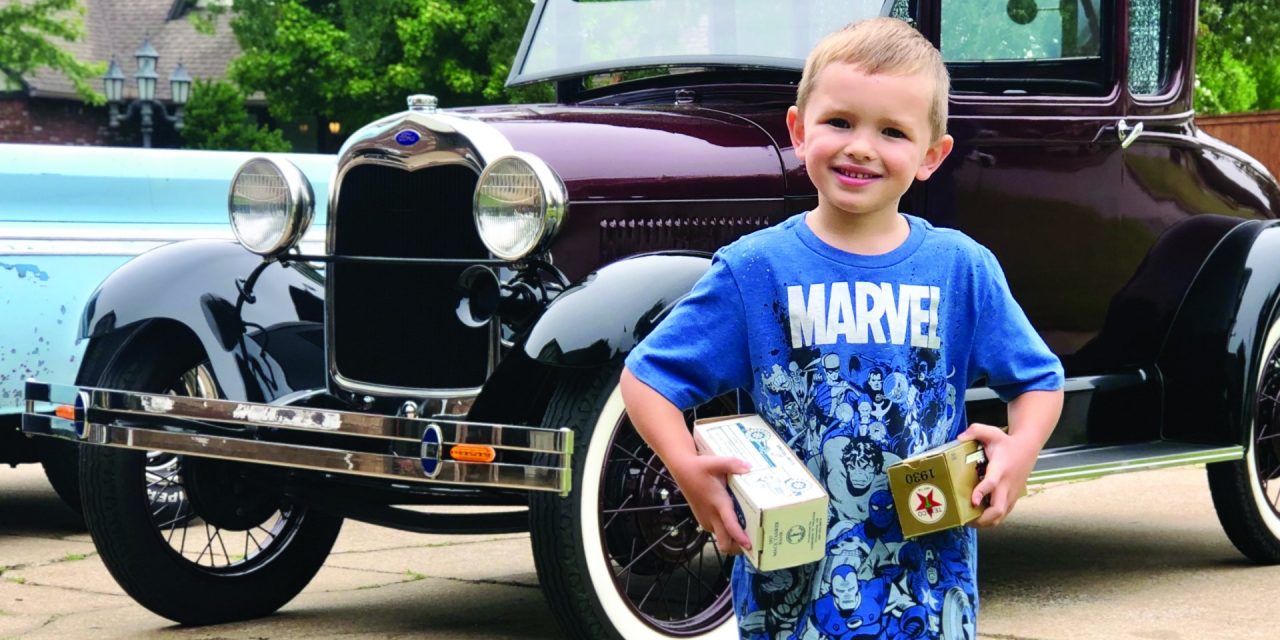 It was the day before Titus the Honorable’s seventh birthday. Since the Coronavirus has limited our ability to go on adventures, I thought I should find one that wouldn’t involve much risk. Our adventures always contain two things: something challenging and a lesson to be learned.

Titus was born with an old soul. He likes cassette tapes, old electronics and old cars. In fact, the older something is, the more interest he has in it. Recently, he was having dinner with us, and we were eating Mexican food. Grammy had a stash of hot tortillas in a woven basket with a hat-shaped lid on top. He asked her, “Grammy, how old is this tortilla basket?” When Grammy told him it was older than he is, he thought it was cool that we had something that old on the table.

I planned our adventure with the idea of introducing Titus to people who have collected and restored antique cars. In Tulsa, when you think of that topic, only one name comes to mind, and that is Red Frese.  Mr. Red has been collecting, restoring and selling antique cars longer than I have been alive. He is 90 years old but still works daily on cars in a warehouse near my office.

Titus and I walked into his warehouse and introduced ourselves. Mr. Red was so excited to see someone so young that he took Titus under his wing and explained each car. Even though one was 90 and the other was 7, one is over six feet tall and the other is way smaller, they came together with their passion for old cars. Mr. Red told Titus his love of cars started when he was 4 years old.

The cars in Mr. Red’s warehouse weren’t ready to drive, so I took Titus to see Mr. Don. Mr. Don lives a few blocks from us and has restored a 1929 Model A Ford.

Of course, before I took Titus to see either one of these men, we had a lesson on how to act. He needed to properly introduce himself, extend his hand to shake and then ask, “Would you have time to show me your car?” And yes, we added “please” and “thank you” to his list of things to include.

We drove to Mr. Don’s house, and with his new skill, Titus introduced himself. Again, two old souls came together as Mr. Don explained how he rebuilt and restored the car. He showed Titus pictures of what the car looked like when he got it. Back then, it was a pile of rusted junk, but Mr. Don knew what it could become.

Then Titus asked if he had time to give him a ride. You should have seen the smile on Titus’ face as he got in the car and Mr. Don backed it out of the driveway. To this day, Titus talks about the day Mr. Don gave him a ride in a 91-year-old car. In fact, he talked about it so much that his little brother Cohen the Goodhearted wanted to see and ride in Mr. Don’s car too.

We kept the boys a few days ago, and Cohen asked if I could take him to see Mr. Don. We loaded up in the car, and as we drove toward Mr. Don’s home. I could hear Titus in the back seat giving his younger brother a lecture. “Now Cohen, you are only 4 years old, but when we get to his house, you are going to have to act like a little man. You are going to have to stand still and listen. You will need to reach out and shake his hand and introduce yourself. You will need to say ‘please’ and ‘thank you.’”

I had to smile. Cohen the Goodhearted was getting the same lecture I had given his older brother. This time, they both walked up to Mr. Don’s door and knocked.

I am grateful to men like Mr. Red and Mr. Don; they were kind and eager to pass their passion on to the younger generation.

“These commandments that I give you today are to be on your hearts. Impress them on your children. Talk about them when you sit at home and when you walk along the road, when you lie down and when you get up” (Deut. 6:6-7).