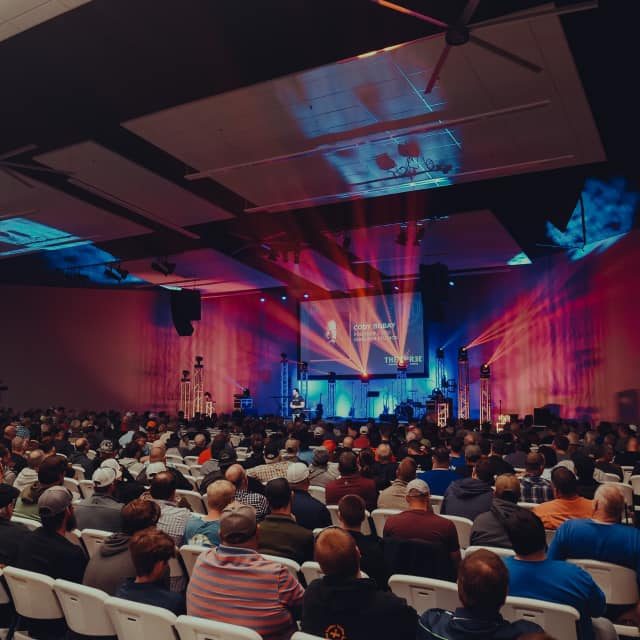 DAVIS—Falls Creek Conference Center hosted the Rewired Men’s Conference, April 24, after a one-year absence due to the COVID-19 pandemic causing a cancellation in 2020. The usual two-day weekend event met just for a day, but the nearly 700 men in attendance exceeded expectations. 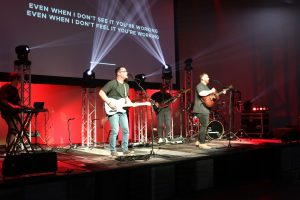 Seth Garrett, worship pastor at Coweta, Community, led times of worship through music with his band.

Rewired also reported 386 digital passes were purchased, which allowed men to gather in other locations to watch Rewired programming.

Bubba Burcham, who serves as Oklahoma Baptists’ men’s ministries consultant and Rewired program director, was pleased with the results of Rewired, especially with how well Falls Creek staff were involved in organizing facilities and logistics with the event. When Rewired’s first session began that Saturday morning, Burcham was already moved by what was taking place. 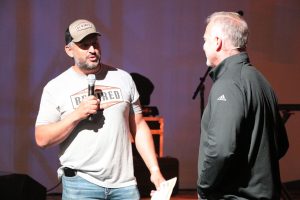 “God started working on my heart, personally,” he said, mentioning Seth Garrett and his worship band who led times of worship through music. “It brought me so much joy to finally be able to meet again like that. To see a lot of familiar faces and to experience worship—there’s something special about the worship at Rewired. I don’t know what it is, but it is powerful to me.”

The list of speakers for Rewired did not disappoint. College football coach Mark Richt set the stage by sharing his life story, beginning with his pursuit to be a top college quarterback and playing in the National Football League (NFL). Like many people, Richt believed his identity was in what he did or wanted to do. 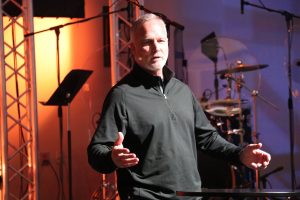 “I was a quarterback,” he said. “That was it. That was my identity. When I introduced myself I would say, ‘I’m Mark Richt. I’m a quarterback.’ I would never say ‘I’m a born-again believer in Jesus Christ.’”

Richt shared how God put him on a path for him to realize he was more than just a quarterback. For one thing, whether he was in college or in the pros, there were always players who were better than he was. At the University of Miami, he played behind Jim Kelly who eventually quarterbacked the Buffalo Bills and was inducted into the Football Hall of Fame. When Richt went to the NFL, he fell rank behind John Elway with the Denver Broncos and then Dan Marino with the Miami Dolphins, two more NFL legends. 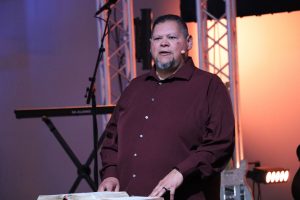 Mike Keahbone, preached a powerful message that resulted in many men responding with kneeling to pray or making spiritual decisions.

Eventually, Richt became a graduate assistant for Bobby Bowden, legendary coach at Florida State University, and started his coaching career, which resulted in successful stints as head coach at the University of Georgia and then at his alma mater, the University of Miami.

Richt told Rewired attendees about a time Bowden, who spoke at Rewired in 2019, shared the Gospel with the team. As a graduate assistant, Richt was convicted by Bowden’s message and made a profession of faith in Christ after that team meeting.

“My life changed dramatically that day,” Richt said. “My life became simple. I didn’t say it became easy, but my life goal became to live a life pleasing to God. That was it.” 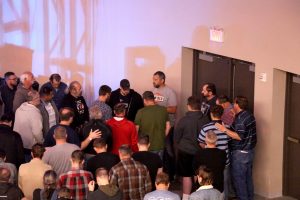 Bubba Burcham meets with men who made spiritual decisions.

Mike Keahbone, pastor of Lawton, First, preached a powerful message that resulted in many men responding with kneeling to pray or meeting with Burcham to report spiritual decisions.

“God is at work in every part of every man that is in this room,” Keahbone said. “Every single man watching online—you have to believe this is not an accident—but God is going to move in such a way so powerfully today and throughout this weekend to where there is going to be a switch that He hits in us that, if we will be obedient, it will change the day for all of us.”

Burcham described the moment that men gathered around him, making life commitments to God. 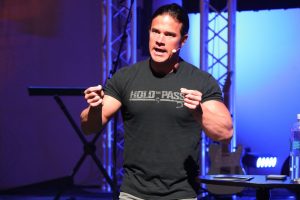 Cody Bobay, CEO of Gibborim Studios, spoke after showing his short film on Shamgar, based on Judges 3:31.

“I am one of them,” he said. “I’m right there with them. I need the healing of the Holy Spirit working in my life just like all these other guys. It’s humbling to think, ‘Hey, they’re coming to me’ when I’m just like them. We’re all living in that same life where Satan attacks you every day, and I am no different than they are, so it’s incredibly humbling for them to come to me and say, ‘Help me.’”

Burcham said they all prayed together and encouraged each other at that moment, praying for God to help them lead their families and be leaders in the church and in the community.

The afternoon session opened with a short film depicting Shamgar in Judges 3:31. The film was produced by Gibborim Studios, as Cody Bobay, the studio’s CEO, spoke after the film. 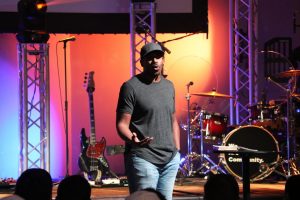 “God has set you up, as a man of God, for success,” Jonathan Evans said. “Christ has already done the hard work.”

“God created you to be a hero,” Bobay said. “He’s given you the strength of the Holy Spirit inside of you, and it’s your choice to decide what you are going to do with it.”

Rewired regulars are familiar with Bobay and the ministry he founded, SoulCon. Burcham knew many would respond well to Bobay’s presentation.

“Cody challenged men,” Burcham said. “That’s his ‘M.O.’ He’s in your face, not in a disrespectful way, but he wants men to take action and do something to make a change, make a difference.” 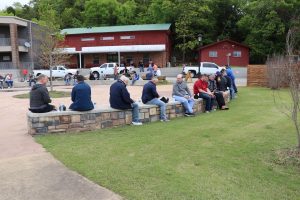 Rewired offered a time of fellowship on Falls Creek grounds.

Jonathan Evans, son of pastor Tony Evans, concluded Rewired by sharing an experience he had as a player for the San Diego Chargers, playing for coaching legend Marty Schottenheimer. Evans compared a motivational speech Schottenheimer gave about being equipped and prepared to play for the Chargers to a challenge God gives to Christians, referencing Rom. 8:29-31.

“God has set you up, as a man of God, for success,” Evans said. “Christ has already done the hard work.”

Rewired also featured time of fellowship on Falls Creek grounds. Men spread out for lunch across Centennial Plaza and Downing Way, areas at Falls Creek adjacent to the Mathena Family Event Center, where Rewired had its sessions.

“What’s great about Rewired is what happens afterwards,” Burcham said. “Men go back to their pastor and say, ‘I want to do more for the church.’ Or they decide to disciple their kids and be more involved with their families. It’s all of those pieces where God works in the lives of men.”