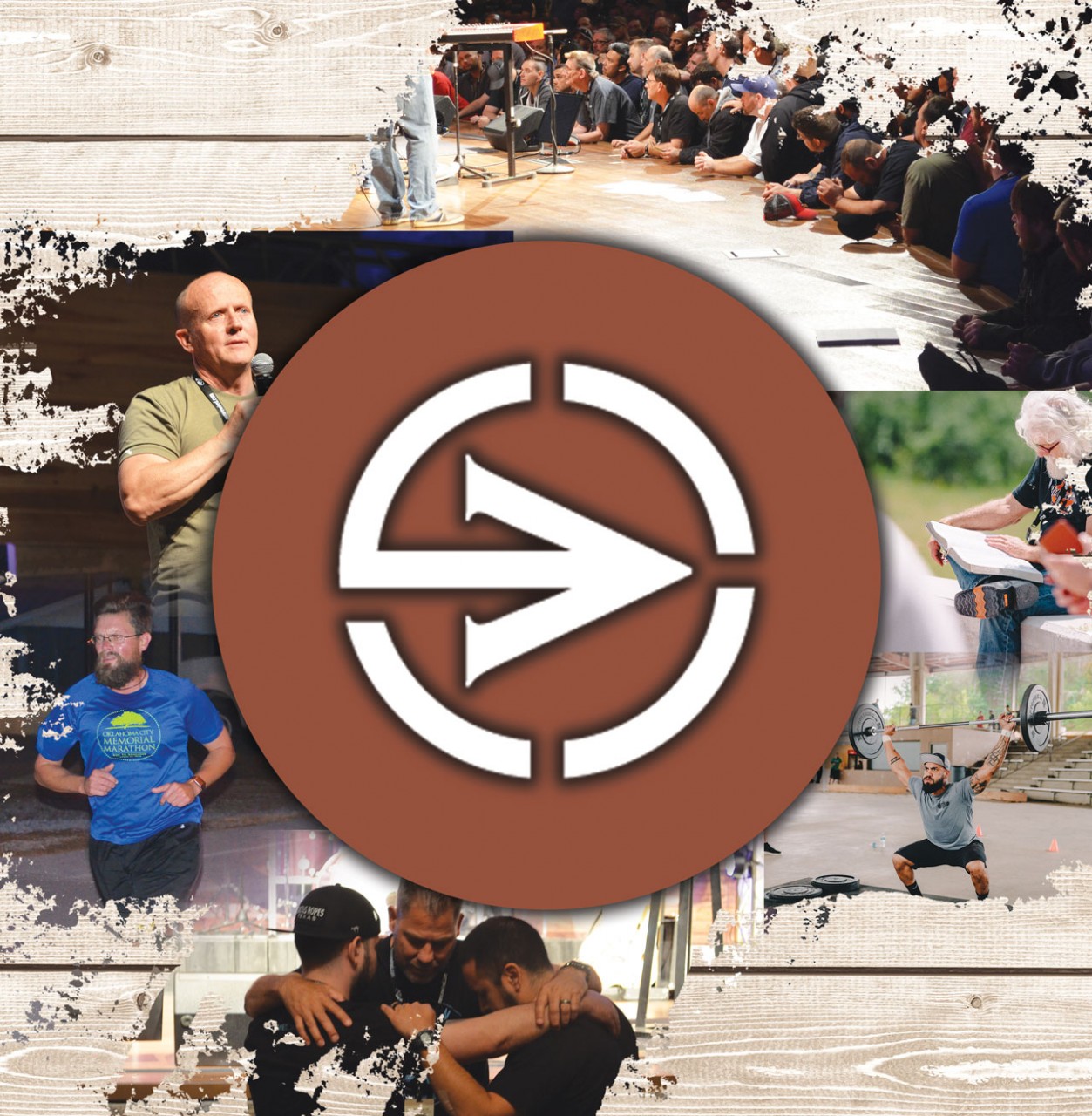 DAVIS—Keith Burkhart led his 10th Rewired Men’s Conference, April 28-29, which drew approximately 2,500 men (323 churches represented) to Falls Creek Baptist Conference Centers. Many came for the first time, while others were longtime veterans of the weekend retreat. But under Burkhart’s leadership as the family and men’s ministry specialist for the Baptist General Convention of Oklahoma, they all were able to experience a time of refreshment and to be challenged to “Advance Truth.”

“Last year, we launched a three-year strategy focused on being men of ‘Truth,’” Burkhart shared in the Men’s Rewired program guide, introducing the conference’s focus this year was on being “men who ‘Advance Truth’ in all areas of life.”

Approximately 300 decisions for Christ were made during Rewired, and Burkhart also rejoices in the reports he has been receiving since Rewired concluded. He shared a story of a fireman who was encouraged to attend Rewired, though he was reluctant to go at first.

While at Rewired, the fireman was convicted of his addiction to pornography, and Burkhart said God used the conference to give him the courage to confess his addiction to his wife and family when he returned home. Within a day after confessing to his family, the fireman shared his faith with friends and other firemen. One fireman made a profession of faith, and others rededicated their lives to Christ, confessing similar battles to pornography.

“This guy is fired up,” Burkhart said after sharing the fireman’s story. “He moved from feeling like he didn’t fit in at church to already planning a men’s event on his property next month to reach all his friends and other men.” 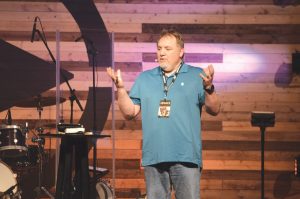 Rewired featured four keynote speakers. Burkhart said he was pleased with the messages all four men gave during the main sessions.

“I thought they were excellent,” he said. “As part of our theme of ‘Advance Truth,’ we made a concerted effort for our keynote speakers to cover aspects of leadership, mentoring and

discipleship. We know that if we are going to turn the world upside down, we have to develop leaders in the local church; we have to help men understand what real mentorship is; and the same with encouraging men to be involved in real discipleship and growing in their faith.”

Former Oklahoma State University and NFL football player Kenyatta Wright kicked off the Friday evening main session, talking about the simplicity yet importance of the Gospel. He spoke on principles to help men live out the Christian life.

“Many of us live lives where we are happy in being saved, but we live in such a way that we are unsurrendered,” Wright said. “We live defeated because we don’t have teammates 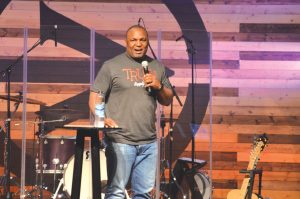 helping us in this journey.”

Jim Putnam, co-founder of Real Life Ministries and co-author of the book DiscipleShift, spoke Friday evening about how many Christian leaders have fallen into temptation, challenging Rewired attendees to be involved in discipleship groups.

“Are you a disciple of Jesus Christ?” Putnam asked boldly. “A disciple is one who takes his work and trusts in the One who gave it, who understands everything that God has done is

for our good and lives his life according to this truth.”

Saturday’s main session featured novelist and military chaplain Cliff Graham and comedian Michael Jr. as keynote speakers. Graham, who has written stories based on King David’s men in 2 Samuel 23, spoke about David’s leadership over his “band of ruffians.”

“David gets the chance to put leadership into action and cultivate these men as part of a unique and elite fighting force,” Graham said. “Their past will stay behind them, and there’s 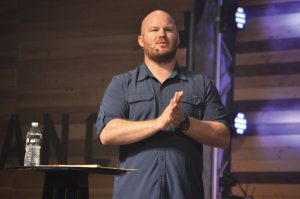 a renewal and a power of a mighty holy God… God is in the business of the redemption of broken men.”

Michael Jr. concluded the final session with many jokes and funny stories. He opened with the remark about the importance of laughter among Christians, especially in times of church fellowship and even while worshipping God.

“What good father doesn’t want to hear his children’s laughter in his house?” the comedian asked. As a speaker during the women’s retreat the prior weekend, Michael Jr. pointed out, “I was here last week, much better-looking audience.”

Michael Jr. concluded with a Gospel message and a time of invitation, as many men surrounded the stage to make decisions for Christ.

The opening session for Rewired occurred Friday afternoon with a time of the conference’s own version of TED talks (brief, informative speeches) called “Man Talks.”

“I wanted some real life stories of guys who understand what suffering is,” Burkhart said of the Man Talk speakers.

Burkhart concluded the session with an unplanned time of invitation, allowing anyone to come forward and make a decision for Christ. With no music interlude, only through the Holy Spirit’s leading, one young man came forward, as many in attendance applauded, cheered and rejoiced over his decision.

Truth Track topics covered such issues as being a Christian in today’s culture, enduring hardship, mentorship, spiritual leadership, how to study and apply a biblical text, sharing the Gospel, being an expositor of God’s Word, true discipleship and hermeneutics.

Every Truth Track session was well-attended, as all breakout meeting places at Falls Creek were filled with men willing to experience spiritual training.

During the final main session, awards were given to winners of the Falls Creek 5K run, the third annual Rewired fitness throwdown and the largest group contest—churches who were most represented by Rewired attendees.

///What they are saying about Rewired

Here are some comments offered by men who attended this year’s Rewired Conference. 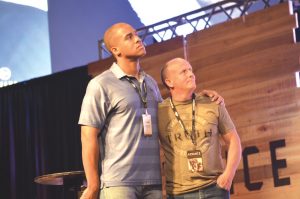 “This was my first year to attend. I wish I had known about Rewired nine years ago. Thanks Keith (Burkhart) for your hard work in putting this conference together. I’ll be back next year, and this time I’m bringing my sons,” said Stacy James from Sapulpa.

“This was my ninth Rewired, and I thoroughly enjoyed it as always. Great speakers, good fellowship and brotherhood keeps me coming back every year,” said Landon Young.

“Men’s Rewired is one of the best and highest quality conferences I’ve been to of any kind. The men from our church left inspired, most of them committing to be better husbands, dads and leaders in the church,” said Steven Earp.

“I took a group of men who have never been to a conference of this size, let alone a conference focused on the problems men deal with,” said Johnny Wagner, pastor of Pawnee, Masham. “It was amazing to see how God got a hold of these men and has already begun a good work in our church.

“Since Rewired, we’ve already got men meeting together to discuss the things that were talked about and to begin to put together a ministry to help other men within our church and within our community to grow in their faith and to find accountability. Our guys are already recruiting guys for next year. We’ve got a guy in our church who is going to pay for every guy who wants to go.”