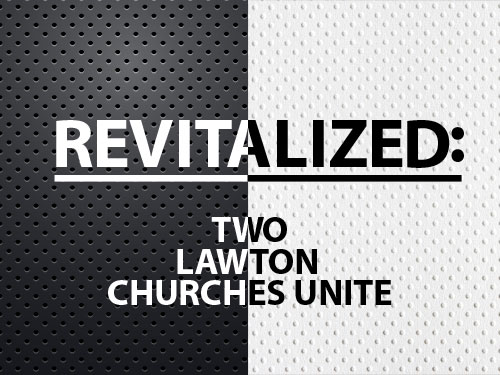 LAWTON—Nearly 10 years ago, a mission was started in Lawton called New Covenant Community Church. Under the leadership of Pastor Michael Williamson, the multi-ethnic congregation was having an impact on the community, with more than 60 active members.

“We began to pray and seek God’s direction as to where we should go,” said Williamson.” We were looking at various parts of town, maybe in the main thoroughfare. But God had something else planned for us.”

At the time, Stan Baker was serving as pastor of Lawton, Northside, a church that has served Lawton for nearly 70 years.

“We were looking one way, then all of the sudden, Pastor Stan Baker of Lawton, Northside, called and asked me to meet,” said Williamson. “He asked me about our membership joining theirs—about us becoming one body—frankly, I had never thought about that possibility.”

The Lawton, Northside congregation had been shrinking, and most of its members were senior adults. The church had not held Vacation Bible School in a number of years.

“When he began to talk about it and discuss, we felt something right about it,” said Williamson. “Our congregation, which had more than 60 members, felt like this was of God. We prayed. They prayed.”

Then in December of 2010, on one Sunday, approximately 65 members from Williamson’s congregation officially joined Lawton, Northside.

“Our congregations saw that, together, we could better meet the needs of this community,” said Baker.

With the two becoming one, the pastors took turns in the pulpit.

Decades back, Lawton, Northside was much larger in membership size. Today, the church is on the move again.

“Fast forward three years, and the Lawton, Northside congregation has seen growth,” said Baker. “We literally had to have our baptistery worked on to get it ready for the new Christians we started to see.”

The congregation brought back Vacation Bible School and focused emphasis on the community.

“I have been a member here for 60 years, and I raised my family here,” said one member. “But we are not just thinking about the past, we cannot focus on how we used to do things. I love and respect each one of the members who joined.”

One of the young ladies who joined, named Treasure, was able to attend Falls Creek in 2012. “We were able to take 20 or 30 kids to Falls Creek,” said
Williamson.

“The transition was not, however, all a perfect one,” said Baker, who now serves as pastor emeritus. “But we believe this was God’s will, and we have overcome. In fact, we believe our combined group is a preview of heaven, and that is a blissful thought.”

Connie Baker, wife of Stan, was helping lead in the youth group prior to the change.

“One Wednesday, we had one student, which was about normal, and the next week we had more than 20. We were so excited,” she said. “The church continued its prayer ministry, and has major plans to reach our community through benevolence work.”

The church has blended worship styles and approaches, and has found a way to engage members of all backgrounds. Lawton, Northside continues to have Bible-based programming on Sunday and Wednesday evenings.

Williamson, a graduate of Southwestern Seminary, has been an active participant in the BGCO’s work, including serving on the board of directors.

“Dr. Jordan has greatly encouraged me,” said Williamson. “He saw something in this venture that may have seemed crazy to some, but he knew we could make history.”

“Never in my dreams would I have thought of this,” said Williamson. “It had to be God, and it just makes me think, ‘Wow!’”