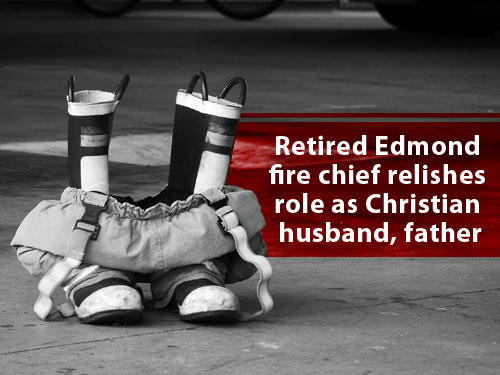 EDMOND—Thirty-five years of service in a community is no small feat, but by God’s grace, Gil Harryman has accomplished this and more.

Harryman retired as Fire Chief for the City of Edmond July 1.

“I was blessed to become a recruit for the Edmond Fire Department in February 1977, and to retire as the Fire Chief,” Harryman said.

When asked to recall experiences that most impacted him during his career, Harryman responded, “There are many experiences that impact your life when you work in the field of Public Safety. One of the earliest was the sense of family that exists within the fire department and the fire service community at large.

“Individuals I had the privilege to work with truly cared about meeting the needs of others and modeled passages like Phil. 2:3-4 and John 15:13.  Serving with fellow believers was a tremendous blessing to me as a young man. It was great to work in a field where we knew we were making a difference in the lives of people in the community. However, to make that difference, we had to be at our best while others were often at their worst.”

Some of the more high profile occurrences Harryman faced took place in 1985-86. Edmond experienced triple murders at a local grocery store, the post office massacre and a tornado that devastated the southwest part of town.

In 1995, the EFD assisted the Oklahoma City Fire Department for 16 days after the bombing of the Alfred P. Murrah Federal Building.

“This incident changed the face of Public Safety in the state and led to what has become known across the county as the ‘Oklahoma Standard,’ he said.  “One month after being named Edmond Fire Chief, our nation experienced the bombings of the World Trade Center in New York City and the Pentagon in Washington, D.C., on Sept. 11, 2001.  This horrific national experience also changed the mission and scope of public safety, not only on a global scale, but also led to many additional improvements across our state and in our individual communities.”

Harryman said he was saved at a church camp at age 12.

“The Lord has always been a guiding force in my life.  There have been many times in my daily walk as a believer that I have had to ask for God’s strength and grace,” he said.  “He has always proven Himself faithful. Currently, the Lord is leading us to become even more involved ministry, as well as branch out into new areas,  such as Oklahomans Against Trafficking Humans (OATH), a faith-based organization helping to rescue young people.”

To Harryman, his most important life roles are “being a faithful follower and representative of our Lord Jesus Christ, a loving and committed husband and a devoted and supportive father.  Other than this, I simply want to always be sensitive and obedient to God’s calling on my life.”

Harryman’s best advice to those looking for God’s will for their lives is to seek it “through personal time in prayer and diligently studying His Word. The Lord often directs us through others. Seek the counsel of spiritually mature individuals who model the principles of Christ.

“Psalm 37:4 says, ‘Delight yourself in the Lord; and He will give you the desires of your heart.’ This means His heart becomes your heart.  Do these things, and, remember, He is always faithful to direct our steps.”

Harryman and Rhonda, his wife of 34 years, have one daughter, April, a student at the University of Central Oklahoma. Harryman, a member of Edmond, Henderson Hills for 27 years, has served the church in many capacities, including on its stewardship, personnel, pastor search, elder selection, management and men’s ministry teams; providing financial counseling and mentoring and leading home Bible studies. He also, has served on the audit committee for Oklahoma Baptist Homes for Children (OBHC).

Alongside Rhonda, Harryman also serves in special ministries for church members with developmental disabilities, sponsoring for the OBHC, and mission trips.